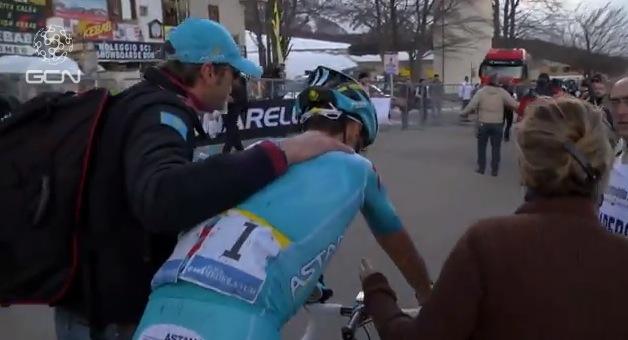 Video: A (long) day in the life of a ProTeam soigneur

The man who looks after Tirreno Adriatico winner Vincenzo Nibali, among others, talks through his day
by Simon_MacMichael

Here’s another behind-the-scenes video from Tirreno-Adriatico focusing on one of the many unseen roles that are filled at a big bike race – yesterday, it was the commentators, today’s focus is on soigneurs, and specifically Astana’s Michele Pallini, known to one and all for some unfathomable reason as Nicolas Cage (okay, he’s a bit of a ringer for the actor – the nickname was given to him by a Spanish rider and it stuck).

They might be known in English as ‘swannies,’ but as Michele shows, there’s little swanning about in the role; like mechanics, soigneurs are among the first up in the morning and the last to bed at night, and in between their prime focus is of course to ensure that their riders’ every need is met, leaving them free to concentrate on the racing, as Michele shows us.

There’s a story behind that top Michele is wearing, by the way. Astana has some of the more striking off-bike wear in the peloton, and it’s by Aeronautica Militare, the brand produced under licence from Italy’s equivalent of the RAF – something that’s worth remembering next time you see Vincenzo Nibali flying down a descent.

Nicolas Cage, if you didn’t know, happens to be the actor’s stage name… his first name is Nicolas, but his surname is the very Sicilian Coppola (he’s Francis Ford Coppola’s nephew, and the surname itself is also the name of the island’s traditional flat cap), an appropriate monicker then for a soigneur who counts Messina-born Nibali among his charges.

Oh, and a final piece of trivia... Nicolas Cage, the real one, used to live round the corner from road.cc's first offices in Bath...