Pinarello’s Dogma 65.1 Think 2, launched last year, has been released with several new colour schemes for 2013, including a Team Sky replica build and a bike to celebrate the Giro d’Italia.

Team Sky raced all of last season, save for the final stage of the Tour de France, on the Dogma 2. The newer Dogma 65.1 Think 2 was released last year, and while it looks virtually identical, underneath the paint is a new 65-ton high modulus carbon fibre layup that saves some weight and boosts the stiffness. Frame weight is a claimed 920g. The team haven’t yet taken to this new bike, preferring to stick with the tried and trusted Dogma 2 for the Tour Down Under and the Tour of Qatar. For a team obsessed with marginal gains, we expect them to make the switch further into the season. It could be they’re waiting for delivery of Shimano’s new Dura-Ace Di2 11-speed groupset, which has been slow to arrive in time for these early season races. The new Dogma allows for better electronics groupset as it’s been designed with these modern components in mind. 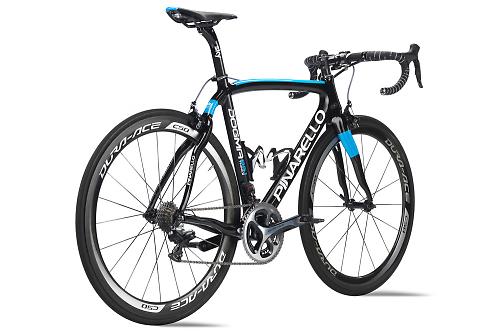 This team edition bike, which is finished in black with a blue stripe (a Rapha influence) on the left fork leg, along the top tube and wrapped around the seat stay wishbone, is a very subtle and classy bike. It’s easy to spot the difference compared to the current Dogma 2 the team are riding, which has a lot more blue. 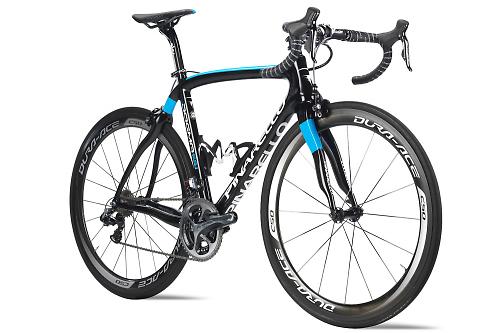 Available in nine sizes, the frame is built with virtually the same parts you’d find on Wiggo’s bike. There’s Shimano’s new Dura-Ace Di2 9770 11-speed groupset. As well a sleeker derailleurs, the new internal seatpost battery that powers the groupset makes for a far cleaner looking bike. Wheels are from Shimano too, the C50 deep-section tubular wheels. And as a Shimano sponsored team, they pick their handlebars and stems from the Pro catalogue. The saddle is a Fizik Arione.

The Giro d’Italia is a race close to Pinarello's heart, it being an Italian brand, and this year they’re celebrating the race with this gorgeous Giro d’Italia commemorative bike. The leader’s jersey is pink, and so the Dogma 65.1 Think 2 is finished with a pink on black colour scheme. A flash of pink on the non-driveside of the bike, along the trailing edge of the fork, along the entire length of the chainstays and part way up the seat stays, matched on the internal faces of the driveside tubes, gives a unique appearance. The bike is fully black from the driveside but shows a lot of pink when you spin it around. It’s a sleek looking bike. 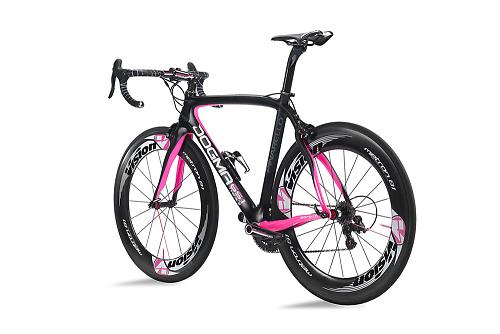 A Campagnolo groupset is the natural choice for such a bike. Super Record 11-speed is the perfect match and there's an FSA chainset. FSA also supply the handlebars and stem. Wheels are from FSA’s Vision brand, with the 801mm deep-section Metron 81 wheels. They’re neatly finished with pink decals, to complete the package. The saddle is from Selle Italia.

Here’s a reminder of the Dogma 2 and kit that Bradley Wiggins raced last year.