Hoy Bikes to launch in May with four city bikes and three road bikes, starting from £850
by David Arthur @davearthur

Sir Chris Hoy first revealed to the world that he was launching his own signature bike brand last November, and we had a first glimpse of the road bike last month. The latest in this staggered launch is the revealing of the details of the range, and the confirmation of a May availability date. So we now know the range will initially include seven road city bikes, with prices starting from £850 for a Tiagra-equipped aluminium road bike.

The bikes are being produced in collaboration with retailer Evans Cycles, who will exclusively sell Hoy bikes through their 49 UK stores. James Olsen and Joel Natale, Evans inhouse product designers, have been working with Sir Chris on the development and testing of the models that will go on sale in late May. Pictured on this page is the top-end £1,350 road model, they haven't released pictures of the rest of the range yet (they're on their way) - although we'd guess that all the road bikes will share the same frame design - given the spread of prices. It’s been an involved process for the two designers and Sir Chris, who by all accounts has been heavily involved in the development of the bikes. “Chris has many ideas about the bikes as well as a willingness to let James’ design experience take over in other areas. He is very conscious that not everyone wants to ride in the way that he is conditioned to and the outcome is a great compromise,” says Joel. He continues: “The road bikes aren’t back-breakingly aggressive nor do they have a particularly tall head tube, delivering a ride which with a slightly different cockpit set-up fitted both Sir Chris and James (two very different riding styles). Testing is now complete and the initial 7 launch bikes have been finalised and signed off by Sir Chris who is due to visit the factory later next month during production.

The Hoy Bikes range launches with three road bikes and four city bikes. As mentioned above, the road range starts at £850 for a Shimano Tiagra-equipped 6061 aluminium bike. A 6066 frame, Shimano 105 groupset and RS10 wheels model will cost £1,000, and the range tops out at £1,350 for a Shimano Ultegra and Mavic Aksium specced bike. Each model will get a full carbon fork. 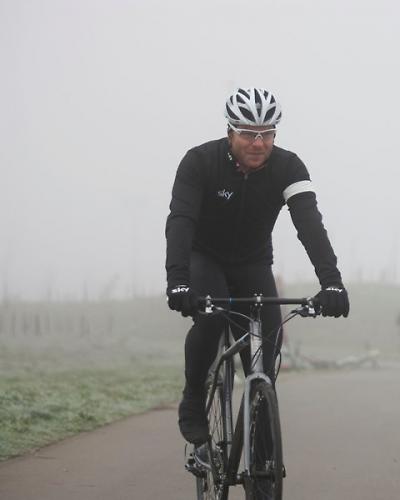 The four city bikes are similar in many areas to the road bikes, and start at £500 for a SRAM X4 and disc brake specced 6061 frame and fork package. The groupset is upgrade to SRAM X5 on the £650 model, while £750 sees the addition of a carbon fork, 2x10 SRAM X5 gearing and upgraded disc brakes. Top of the line is a SRAM Rival/X7 2x10 bike with further upgraded disc brakes, no price has been confirmed for that model but we’re betting it’s under a grand.

In terms of sizing the chaps at Hoy promise that people from 4’10” up to 6’4” will fit their bikes. Reach and stack will be proportional to the frame size, and customers will be able to further customise bar width and stem lengths to achieve the position which best suits their riding. Fit is something Hoy are keen to stress: “We want to offer bikes that are unique and this means not being too generic with regard to geometry numbers, sizing, or how we can adapt the fitting and tailor it for each individual’s riding needs,” according to the Hoy publicity material.