Following in the footsteps of Victoria Pendleton and Chris Boardman who both launched their own signature bike ranges with that other large cycle retailer, Halfords, Sir Chris Hoy today revealed the first details of a range that will include three road and four city bikes, and which will launch late May 2013. They haven't released any details on the actual bikes yet, today was simply an annoucement of their plans.

Chris Hoy has been involved in the design process. We even saw him doing some 'homework' at Eurobike back in September in the company of the chief designer from Evans Cycles. The brand has ambitions to develop bikes for all cyclists, not just those that want to emulate him. Track bikes are definitely on the drawing board, it would be great to see an affordable replica of the bike Chris Hoy used so convincingly this summer for young hopefuls wanting to follow in his footsteps. 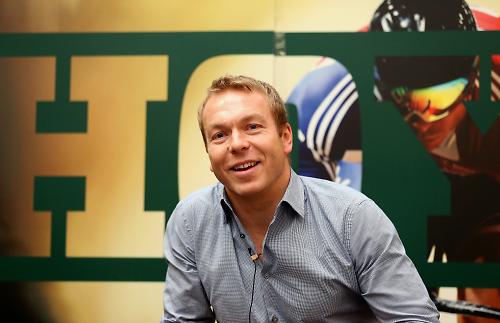 Apparently the brand has been several years in the process but it’s only in the last 18 months that Chris has been more heavily involved, juggling the demands of competing at London 2012 with those of designing a range of bikes.

Announcing the launch of the new brand Sir Chris says he wants the brand to make cycling more accessible to people of all ages: “Cycling has been a central part of my life from an early age and has helped me achieve so much. I want to help more people experience the power and enjoyment of cycling, as well as demystifying it and making it accessible to all. That's why I decided to create a brand that embodies this vision and my passion.”

We’ve no word on pricing of the bikes yet but the three road bikes are being aimed at recreational and sports cyclist, so expect them to be reasonably affordable. And there will be four bikes designed for city commuters and leisure cyclists. Sizing will include youth bikes, getting kids into cycling is clearly an important part of producing a range of bicycles for Chris.

Chris has been involved in the design of the bikes putting his considerable experience of racing and cycling at the very highest level to good use, giving input on the many technical aspects from simple things like how they look to more complex geometry and tubing details. He’s been road testing the bikes himself. “I’m really enjoying building my brand from scratch,” he said. “There are so many aspects that need to mesh perfectly and finding that balance has been very exciting and rewarding. I’ve been working very hard on developing the brand values as well as the visual features, which will appear on all of the bikes.”

Nick Wilkinson, Evans Cycles CEO, added: “This partnership is the perfect opportunity to bring together Britain’s most successful Olympian and the UK’s leading specialist bike retailer. We have experience of building bikes since 1921 and share Sir Chris’ passion for cycling, with the belief that it should be fun and accessible for all. This is a perfect way to build on the success of the Olympic Games and inspire more people to get into cycling.”