Carbon, Titanium… and coffee, just some of the tasty treats at this year's Bike Place
by David Arthur @davearthur

Bike Place is the UK’s newest trade-only show, this was its third year, and fittingly enough it takes place inside the new Wing complex at the Silverstone motor racing circuit. It may be a young show, but it does attract some very interesting brands from the the more boutique and high end of the road and mountain bike market. Here’s our selection of the best road bits from the show. 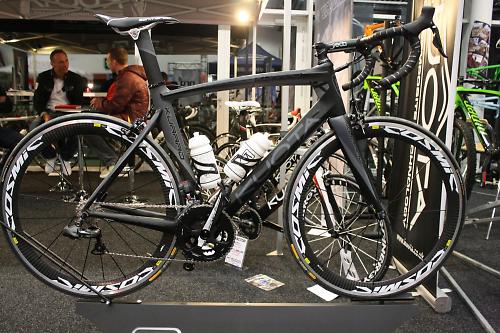 Kuota Kuraro is new for 2013, and is their aero road bike offering. The company is well regared for its time trial bikes, and they've used this expertise to model this sleek road frame. The carbon monocoque frame has been shaped to reduce drag with optimised tube shapes. 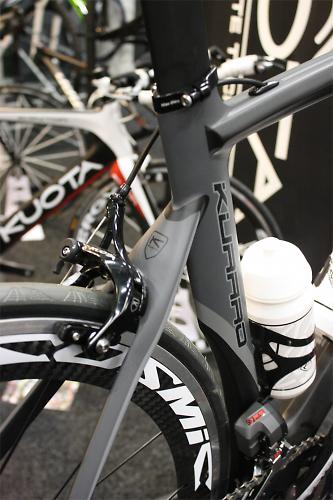 Stiffness has been considered an important aspect, giving the popularity of aero bikes with sprinters. The PressFit BB30 bottom bracket is houses inside a hugely reinforced section of the frame. A tapered head tube features along with a reversible aero seatpost – so triathletes can get the steeper seat angle they're allowed to run. The frame costs £1,399, with complete bikes from £2,450. The Kuota KOM Air is one of several models in the KOM range. As the name suggests, they're designed to be light. The frame is in the region of 770g, depending on frame size, making it one of the lightest production frames currently available. 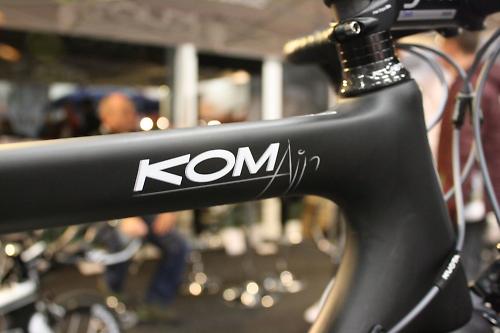 There's a BB30 bottom bracket down below, a tapered head tube up front, and skinny stays out back. Cables are routed internally, as is the case with nearly every top-end race frame these days. 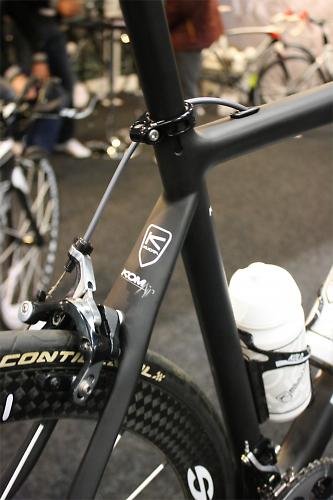 Wishbone seatstays with the rear brake cable routed through the top tube and popping out the top, just ahead of the seat tube.

Roux Bicycles is a brand new line of bikes with a focus on low prices and intelligent specifications. They’re the work of distributor 2x2 Worldwide who wanted to put all their combined expertise into their own range of bikes. There’s nine bikes at launch, and they’re planning to expand the offering over the next year. The models they’ve brought to market already look very good. 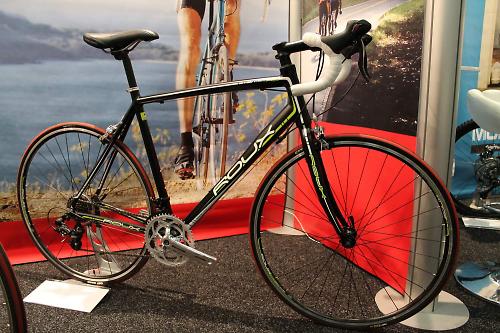 The road bike range starts with the Vercors R3 at £529.99. It has a 7005 double butted aluminium frame built with a 8-speed Shimano A070 drivetrain and FSA Tempo compact chainset. Brakes are Tektro and there’s space for mudguards A little more money, £449.99, gets you the Vercors R7. IT has a similar 7005 double butted frame but has internal cable routing. Drivetrain is a 8-speed Shimano 2300 with an FSA compact chainset. 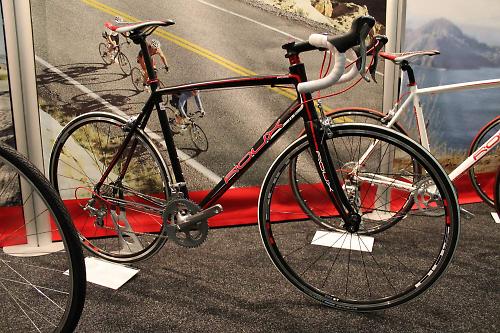 And at the top of the range is the £979.99 Vercors R9. It too has a 7005 frame but it’s triple butted, so lighter, and has smooth welds and internal cable routing. The fork is carbon fibre. A full Shimano Tiagra 10-speed groupset is complemented with a Shimano R501 wheelset. Tyres are Schwalbe Lugano. 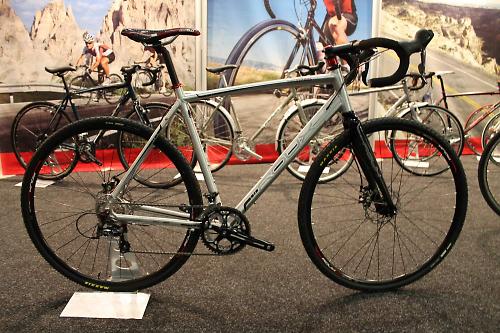 This model, the Conquest 3500 disc-equipped cyclocross bike, was grabbing a lot of attention. The frame is left raw and a clear coat lacquer is applied over the top, it looks very nice in real life. It has Tektro Lyra mechanical disc brakes with a carbon fibre fork and cables routed internally. The frame is made from 7005 aluminium. A Shimano Sora 9-speed groupset completes the nice build. It costs £779.99. 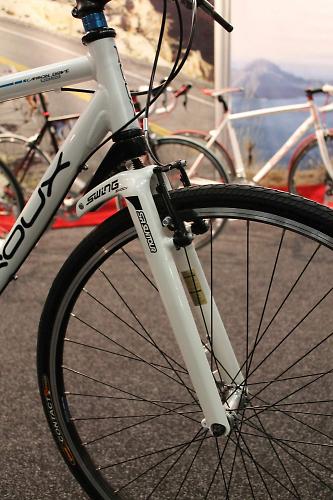 Our final pick is the Carbon Drive G8, costing £899.99. Most interestingly is the fitting of a Suntour Swing Shock fork up front. It looks like an old AMP suspension fork from mountain bikes in the early 90s. A simple cantilevered design keeps it very simple and light, and it’s the same height as a rigid fork. There’s just 30mm of travel, enough to smooth out bumpy roads and potholes.  The legs are magnesium to reduce weight, it’s about 1.41kg on its own. It’s bolted to a 7005 aluminium frame with a Shimano Nexus 8-speed internal gear hub with a Gates carbon belt drive. It’s a very nicely designed bike for commuting cyclists and is about as maintenance free as bicycles get. 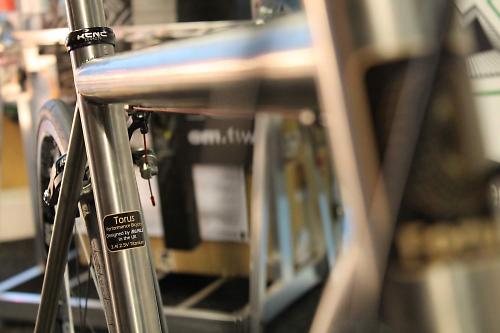 We saw the first Torus prototype at this show last year, and this year the final production bikes were on show. Torus is created by the Andy Jones at Clee Cycles, the UK distributor for KCNC components. They’ve worked with Justin Burls, a titanium frame building specialist, and between them they’ve designed a nice range of 29er mountain bike hardtails and this single road frame. 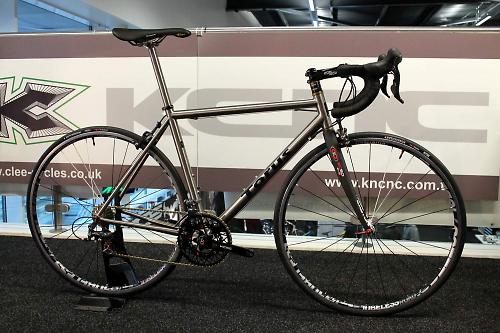 It’s designed as an all-rounder for racing, sportives and riding to work duties. The tubeset is plain gauge 3Al/2.5V titanium with 6Al/4V cowled dropouts. A traditional 38mm head tube houses a straight 1 1/8in steerer tube and the 31.9mm seat tube takes a 27.2mm post. IT’s currently only available in a medium and large, with a small on the way. Weight for a medium is a claimed 1.32kg. A frame costs £899. 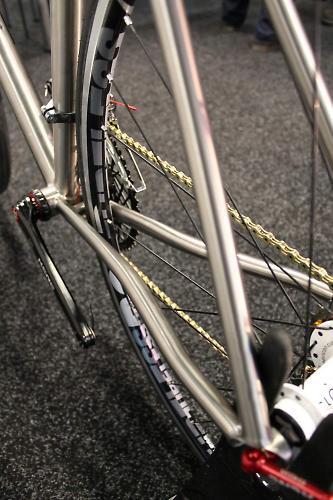 We were very impressed with what we saw. There’s a winter training bike and disc-ready cyclocross frame on the way. KCNC have a new set of Aero bars. They’re a fully adjustable design and will cost £299. 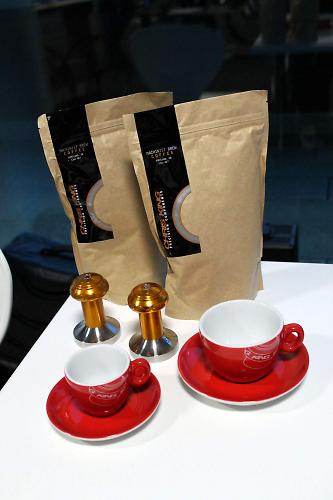 Chris King now do coffee beans and branded cups, to add to their existing tampers. The beans, which come in two roasts, Cielo Espresso and Machinist, will cost £15.99 a bag. The cups, available in espresso or regular sizes, will cost £23. 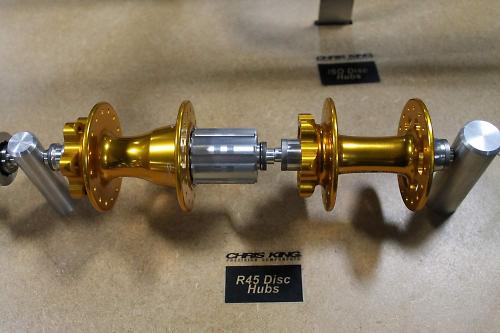 Back to what Chris King is really known for, there’s a new R45 disc hub in the pipeline. The same as the regular R45 hub, with a 6-bolt mount for the new breed of disc-equipped road bikes coming onto the market. The front will cost £212 and the rear (with 135mm spacing) is £414. 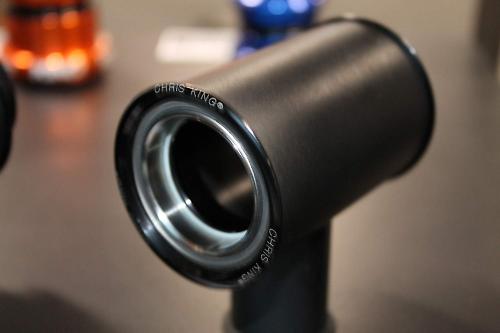 As the bicycle world slowly moves away from external bottom brackets increasingly to press fit types, Chris King have developed a PressFit 30 and 24 bottom bracket. The PF30 weighs 178g, comes with a 5-year warranty and is available in 10 colours. No word on pricing yet.

The Fondriest TFZero highly impressed Stu when he tested it towards the end of last year, and here’s a look at some of the slightly more affordable models. The TF2 is the next step down from the TFZero, and where the latter is a fully custom model, the TF2 is available in stock sizes. It’s a full carbon frame with a weight of just 950g, and a 345g fork. It uses their own aero seat post which weighs 190g. 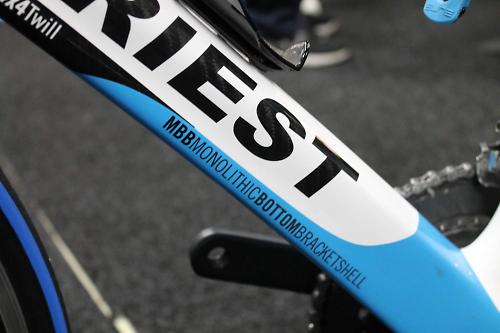 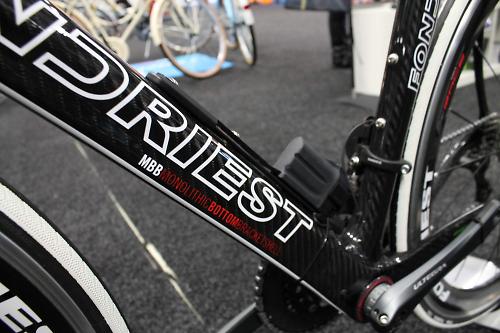 Cables are routed internally and this limited edition version, with a snazzy carbon weave finish, has been designed specifically for Di2 and EPS electronic groupsets. 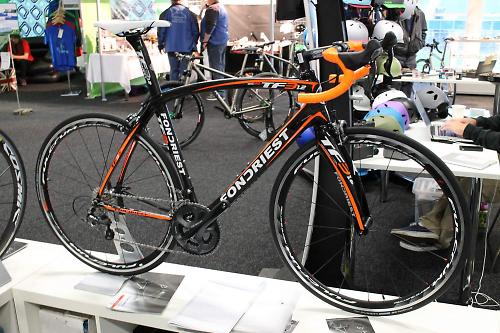 Next down in the range is the TF3, which visually has a very similar looking frame to the TF2. It has a different carbon fibre layup however and the weight is a little higher, but it’s still under a kilo at 980g. 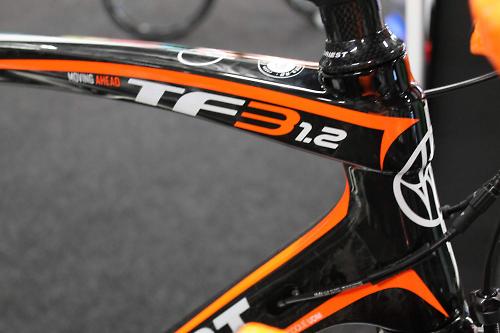 The fork is slightly up too at 370g, and it has the same scuplted frame profile as the more expensive TF2. This is the new Magnus from Velocite. The young brand, founded in 2008, is ambitious and the Magnus is their flagship carbon bike. Frame weight is about 1kg and it's built from high-modulus carbon fibre and is packed with modern details. An oversized BB30 bottom bracket and a tapered head tube, 1 1/8in up top to 1 1/2in at the bottom. 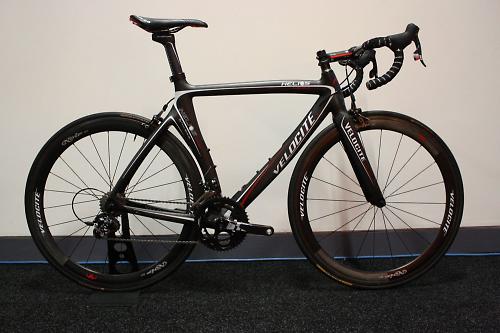 The Helios is the aero bike in the Velocite range with a cutaway seat tube that manages airflow over the rear wheel, and a skinny-bladed fork. Again, it gets a BB30 bottom bracket and a tapered head tube but this time you get internal cabling throughout.