We round up some of the shiniest shoes at the Core Bike Show, including Northwave, Vittoria, Spiuk, Fizik, Gaerne, DMT...
by Mat Brett

There were tons of interesting bike shoes on display at the bike industry’s Core Bike Show earier in the week. Here are some that caught our attention…

Gaerne's shoe range has had a bit of a revamp since they got Boa on board to do the lacing on their top-end shoes. The new Carbon G.Chrono (main pic, £259.99 or £299.99 depending on sole material) is top of the pile, with the previous top-end shoe now renamed as the Carbon G.Air (£259.99). 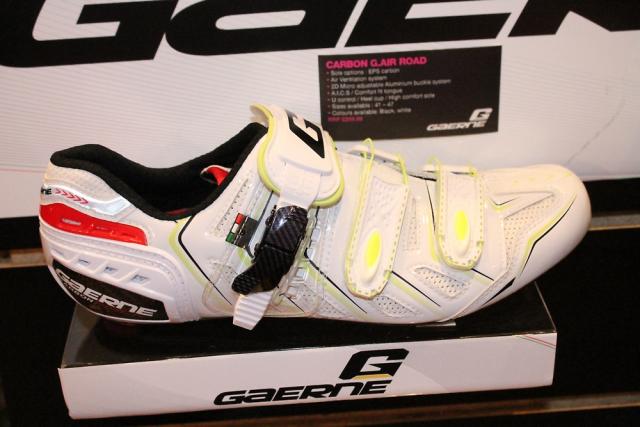 There are plenty of other interesting models in the range too. We were particularly taken by the G.Futura at £139.99 (composite sole) or £169.99 (carbon sole) which features an outer made entirely from reflective material. That'll get you seen on those early morning training rides. 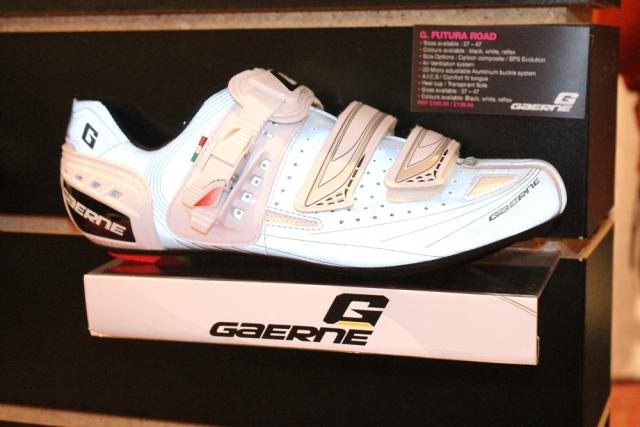 Spiuk had their shoe range on display and they had us wondering what some other manufacturers were doing to justify their shoes being so expensive. 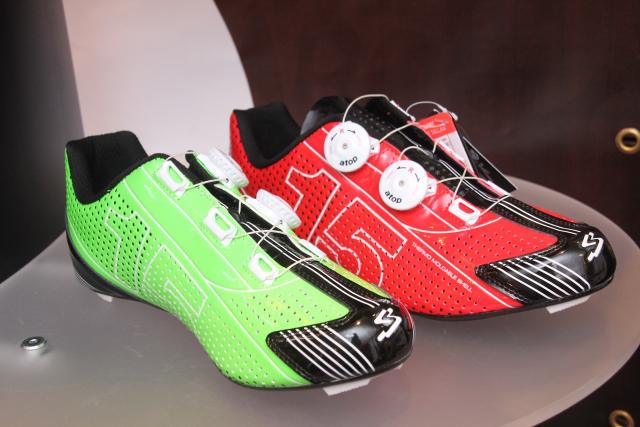 The top-of-the-range ZS15RC shoe has a Boa lacing system, full carbon sole, heat-mouldable insole and 470g all-in weight for just £169.95. That sounds like a bargain to us. 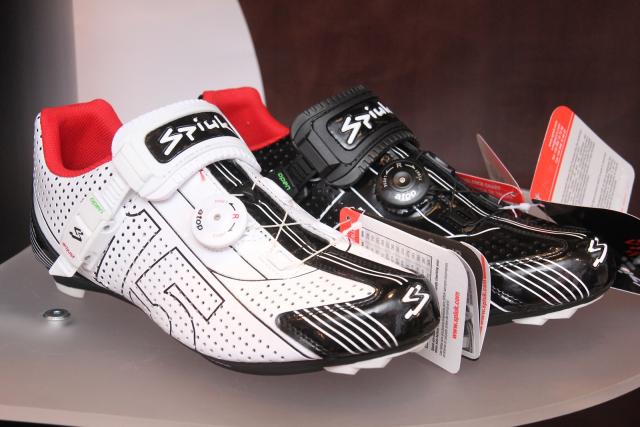 Further down the range the shoes look really good value too. The composite-soled ZS15R gets a Boa closure in conjunction with a ratchet strap, and it's a fair bit heavier, but it's only £109.95. 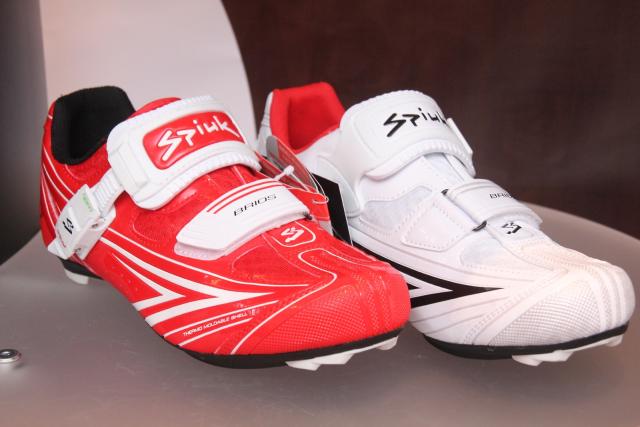 The Hora Evo is the top-level shoe in the Vittoria range, coming in at £219.99. It uses a unidirectional carbon sole with a thickness of just 3mm and a microfibre upper. The claimed weight is 276g per shoe (size 8).

If you’re not into this fluoro version, it’s also available in sensible black. The dial closure system that’s used alongside the ratchet strap is Vittoria’s own patent. 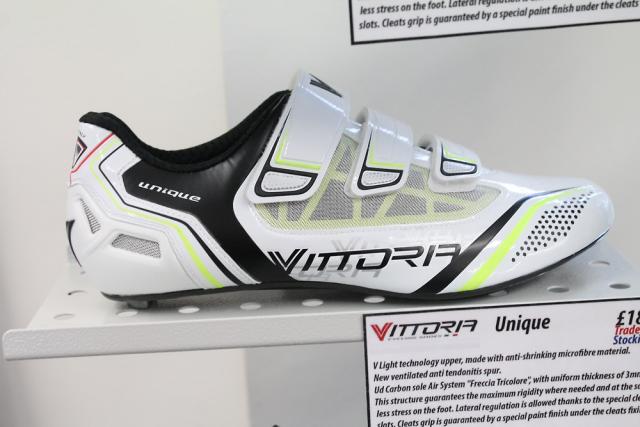 The Unique (£184.99) uses the same sole and comes with three Velcro straps to save weight - Vittoria quote it at just 229g per shoe for this design. 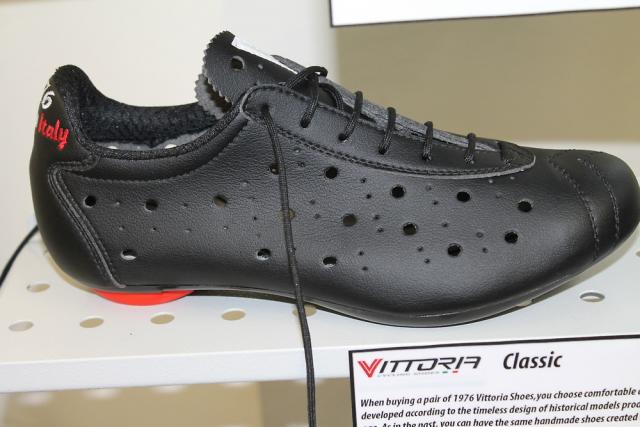 The Classic (£114.99) lives up to its name with looks that hark back to an era gone by, although they use modern materials. The uppers are actually microfibre rather than leather, for example. These were causing quite a stir among urban riding types particularly when they found out there available in an SPD version too. 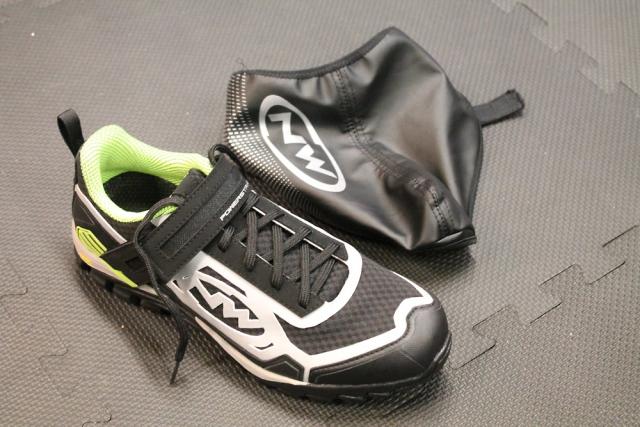 Northwave have plenty of interesting models in their lineup, including the Mission which comes with a chunky Vibram sole for plenty of grip when walking. There’s loads of reflective material on the upper so we can imagine this shoe is going to prove popular with commuters. Unusually, you get waterproof polyurethane shoe covers included in the £89.99 price. The £69.99 Jet 365 is designed as a touring shoe but we imagine it will appeal to commuters too thanks to the grippy natural rubber sole. 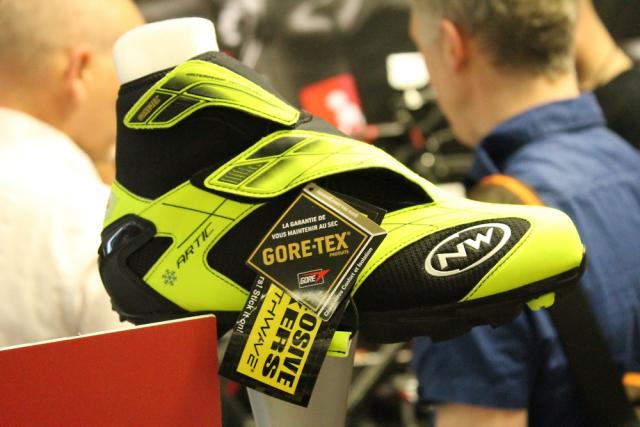 Northwave’s Celsius Artic GTX boots (£169.99) come with a Gore-tex membrane, a carbon-reinforced sole and a ‘Panda thermic Insulated construction’. Don’t worry, no pandas have been harmed in the making of this footwear – it just means there’s a thermal lining in there to keep your feet warm. The Extreme road shoes (£249.99) come in various different finishes, this being the most subdued. With a three Velcro strap closure, these are mega-light: Northwave reckon just 200g per shoe in a size 42 (a UK 8). This shoe is compatible with Northwave’s slim Speedplay adapter system. These are DMT’s Prisma 2.0 shoes (£235) in a Philippe Gilbert edition – hence the Belgian colour scheme. We reviewed these last year (in a far more subtle white finish) and got on really well with them. The sole is Toray MR60 carbon and that’s an Atop closure system. We told you about Fizik’s new and expanded lineup when we went to the launch in Italy last September and we’ve already reviewed the R3. The K1 triathlon shoe is new, and available for men and women. It has the same sole as last year's R1 shoe with a breathable neoprene upper and sailcloth straps. The women's shoes are an odd pair, with the right shoe orange and left shoe pink. Controversial! The K1s are £300 a pair.

For more news on shoes, check out our story on Bont’s new model and updated range.