Australia’s Bont have updated their range for 2013, introducing their most affordable shoe ever and altering the design, including the closure systems, of a couple of important existing models. There’s also a big price drop on Bont’s top road shoe.

First up, the new shoe… It’s called the Riot and it comes in at £99.99. Previously, the cheapest Bont was the £125 A-Three that Liam reviewed here on road.cc a few months ago. Liam fell in love with the A-Threes, by the way. We suspect he wears them to bed. He also gave them a rare-as-hen’s-teeth 10 out of 10 for value which bodes well for the Riots.

The Riots are made with a glass composite sole with a carbon surface layer. The guys at Bont tell us that the soles aren’t quite as stiff as you the full-carbon soles you get higher up the range, but they’re not miles off and some people don’t want that ultimate degree of stiffness anyway.

You do get most of the other features that we’ve come to expect from Bont. The soles are heat mouldable, for example, and you get good arch support in there. The Riot isn’t a full monocoque design, though, the sole is essentially a tub that your foot sits in, and then the uppers are stuck onto it. 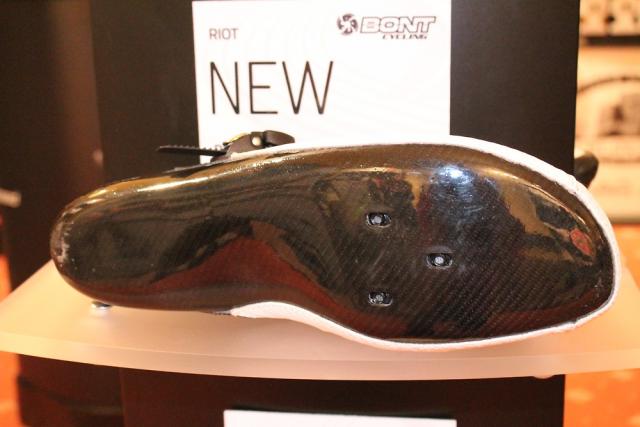 The one criticism that Liam made about the A-Three was that it lacked much in the way of ventilation but it looks like Bont have addressed that here. The picture shows a prototype model, by the way. The finished version will have grippers on the heel and toe, like other Bont shoes, to prevent sheep-on-lino moments when you walk to and from your bike. The ratchet will be slightly different too, and the upper won’t extend so high around your heel. It’ll be about 10mm lower to avoid any Achilles rubbing as you pedal.

We know that not everyone spends £100 on bike shoes but these look exceptional value for money to us. We’ll have to wait to find out how they perform, though, because they’re not due to hit the market until about June. 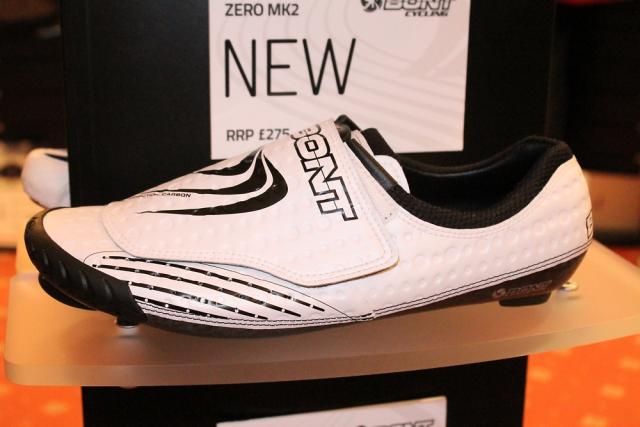 Right up at the other end of the scale, Bont are replacing the Zero with a new Zero Mk2. Logical; we like that. One of the biggest changes is that they’re ditching the laces of the previous incarnation with an Atop dial closure.

Despite Sir Bradburn Higgins wearing the Zeros to Tour de France and Olympic victory last year, word seems to have got back to Bont HQ that in our road.cc review we said, “The lace closure takes a bit of getting used to. Like most people, I occasionally fine-tune the fit of my shoes on the go but you can't do that here. I actually got around it by using a triathlon-style lace lock that worked well. Then I could easily slacken them off a bit if they felt too tight without the need to stop.”

Obviously, Bont have made the switch purely on the basis of our comments… and quite right too. 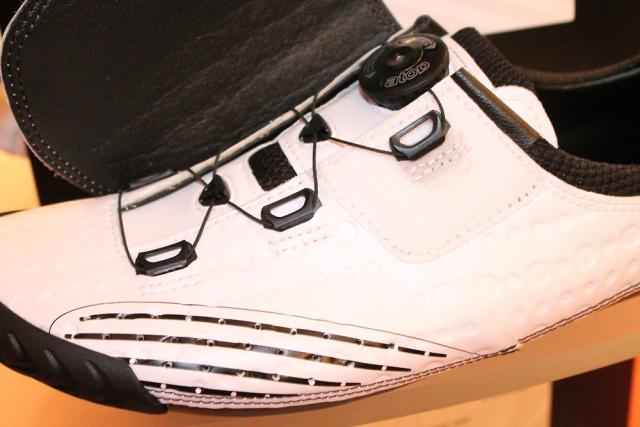 Arsing about aside, the Zero Mk2 is actually quite different from Mk1, now coming with a sole that’s made from unidirectional carbon sole rather than 3K carbon. The new version is a touch lighter and it’s much easier to make, which helps explain why the Zero Mk2 is priced at £275 rather than the £390 of the Mk1.

Look closely and you can see that the upper now gets a golf ball-style dimple pattern to the surface, a little like Zipp use on their wheels. That’s more about the appearance than the performance. Bont don’t claim it’s going to boost your speed. 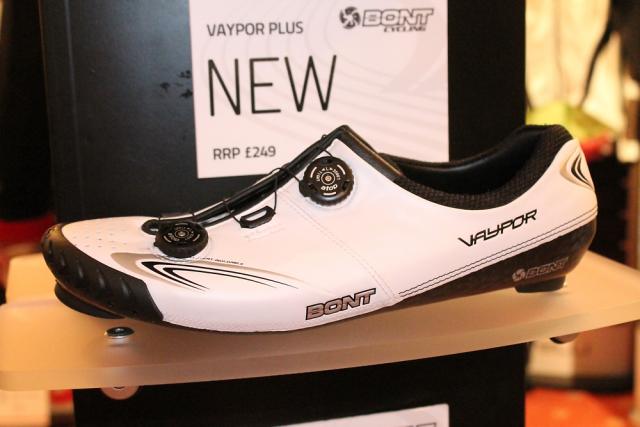 The other shoe that gets a major facelift for 2013 is the Vaypor, probably our favourite shoe in the Bont range, so we hope they haven’t mucked it up. The new version is the Vaypor… any guesses?... the Vaypor Plus. See, it’s dangerous to assume.

It’s a completely new construction using the same unidirectional carbon sole that Bont are using for the Zero Mk2. Bont have also altered the angle of the arch support – it’s a little flatter now but extends further into the shoe – and the way that your feet sit in order to avoid the numbness that some people felt with extended use. The insole also features a new metatarsal button too. It’s all about improving circulation.

The other big change is that whereas the Vaypor uses a strap and ratchet system a lot like the Riot’s (above), the Vaypor Plus gets two Atop dials. Once set, you should never need to touch the lower one. We’ve used the Atop system on DMT shoes in the past and found it to be perfectly reliable, strong easy to use… and all sorts of other good things. Turn the dial one way to tighten the lace, turn it the other way and, guess what, you loosen it.

For all the details on the Bont range go to www.saddleback.co.uk.