A rolling list of what's going on at Eurobike wheel-wise...
by dave atkinson

You could spend a whole week at Eurobike just looking at wheels, and still not see every one. Here's a quick rundown of some of the more interesting stuff we've seen, as well as news from the major players.

We'll add more when we see more, and we're sure we will. Of the major players, it's Campag and Fulcrum who have been the busiest, mostly keeping occupied amalgamating their ranges.

But there's hundreds of smaller companies doing interesting stuff too, so we'll keep adding to this story when we see anything of note. 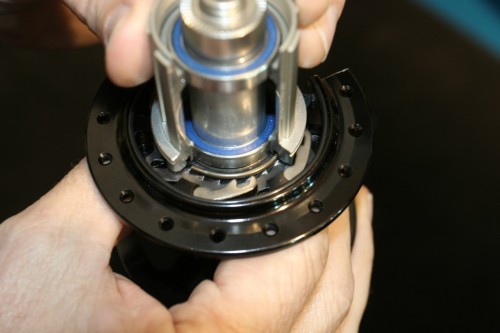 Bill Shook at American Classic was very keen to show us a couple of new wheelsets, but also had a nice cutaway of their rear hub which shows very well how the mechanism differs from a standard rear hub. Instead of using springs to push the pawls against the ratchet, the AC hub uses a timing ring which engages all of the pawls mechanically, at the same time. The pawls don't drag across the the ratchet, so it doesn't wear and there's no unnecessary friction, and because all six pawls engage at the same time there's less stress on the ratchet, meaning that American Classic can use an alloy one.

They've also been busy thinking about the freehub body. Shimano cut out three of the spline teeth on the ten speed cassette, and they have a patent on the high-splined alloy freehub body. We've had test wheelsets that have had their low-profile freehubs pretty badly chewed up by a ten-speed cassette. American Classic's simple solution is to dovetail some strips of hardened steel into the freehub, for the cassette to sit against. There's no danger of the cogs eating through the hub, and it's much lighter than a full steel freehub. 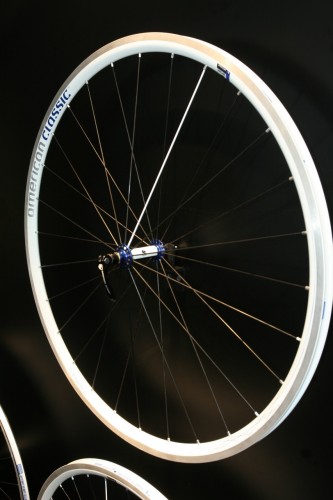 Anyway, on to the wheels. The American Classic Aero 420 uses the same rim as before, but in an effort to get the rear wheel stiffer, the spokes have been redistributed to a 2:1 ratio in favour of the drive side. This would normally mean less tension in the drive side spokes, but by moving the flange out on the non-drive side, it's possible to equalise the tension. "It's not a new idea", says Bill. "The same principle was used on the spoked wheels of Model A cars."

The new star of the range, though, is the new Magnesium wheel. A few years in the making, the Magnesium rim weighs just 300g. "The performance of the wheel is mostly based on the weight of the rim", says Bill. "Magnesium is lighter than Aluminium but it's not as stiff and there are issues with corrosion. These things can be overcome, but you need really close control of the process. We've been working on this for a long time, and as we've done it we've learned more and more about the material. It has great potential because it damps high speed vibration very well." 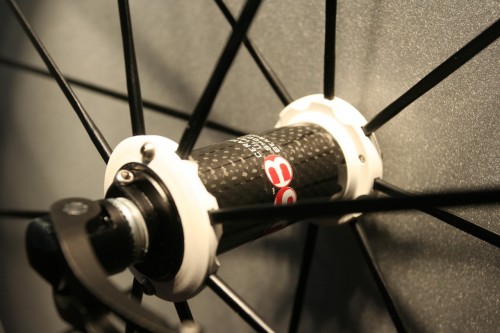 Fulcrum may be a subsidiary of Campagnolo but up until now their ranges haven't really crossed over too much, with Fulcrum pretty much given carte blanche to innovate and Campag doing their own thing. That can't be said of the 2010 ranges though, as there's a good deal more, shall we say, sharing. With the stickers off, you'd be hard-pressed to tell the difference between a Shamal Ultra and a Racing Zero, or a Zonda 2-way fit and a tubeless Racing 3. That's not a bad thing per se, just an interesting development. Campag continue with their three-spoke clusters on the rear wheel, whereas Fulcrum are using 2:1 with a two-cross pattern on the drive side. Other than that, you often seem to be looking at the same wheel.

Fulcrum's Racing Speed XLR (Read: Bora Ultra) has been well received over that last year and now it has a cheaper sibling with an alloy hub instead of a Carbon one, and different spokes. The change in weight is small (about 40g), but the change in price is substantial, about €600 on the continent.

Racing 7, Racing 5 and Racing 3 are unchanged but the Racing Zero and Racing 1 have been completely redesigned: there's a new hub, new spokes (standard flat profile instead of the tie-shaped ones from last year) and a new rim that's a different depth for front and rear: 24mm on the front, 30mm for the rear. The Racing Zero gets a Carbon hub and ceramic bearings, and there's an overall weight saving on both wheels of about 100g a set.

On the Campag front, most of the interesting new wheels are, well, the Fulcrum wheels we've just told you about, but with different spoking and different stickers. There's a new Hyperon One and a new Scirocco, too. 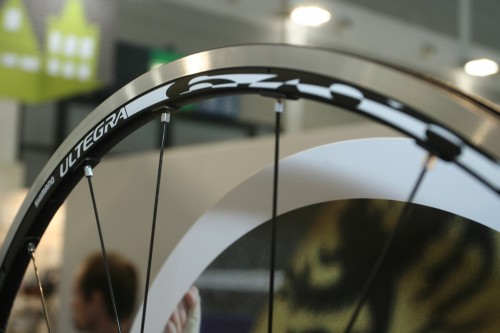 There was nothing on the Shimano stand that hasn't already been reported on road.cc - The new Ultegra 6700 wheels were there, along with the RS30 and RS80 sets we've reviewed, and the Dura Ace family of wheels (composite clincher, Carbon tubular, deep section) that we're hoping to get our hands on soon. 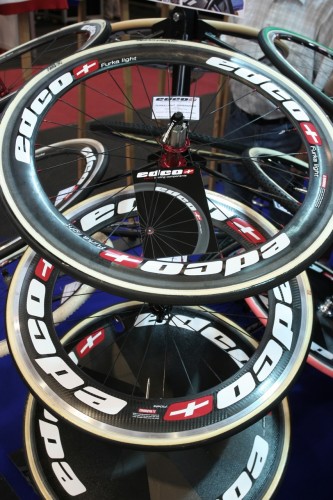 Edco are a company with a long history in cycling but the company in its current guise is only about two years old. Since it was bought by new director Rob Van Hoek, the Dutch outfit has concentrated solely on wheels and they are making some very nice looking high-end units, with Swiss-made hubs. The highlights of the range include the 1150g Albula light wheelset; new hub designs currently in the pipeline will look to shave another 100g. Rob's first original wheel design, a track wheel with the flanges set at the angle of the spokes to minimise stress, has been running in the six day races over the winter and has been very well received, with interest from several track builders who'd like to spec the wheels on their bikes. 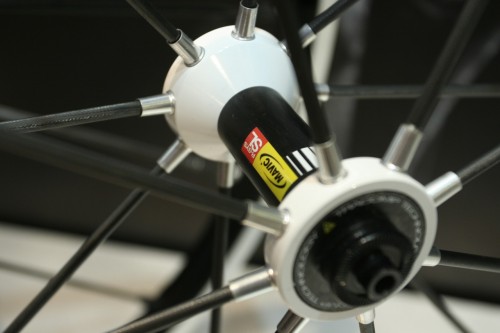 Mavic are ploughing on with the R-SYS range, despite a couple of high-profile wheel failures that have seen some riders lose confidence in the TraComp system. New boy for the show was the R-SYS SL, a lighter version of the wheel that tips the scales at 1295g. The Aksiums have had a makeover too, but it's pretty much as you were in the Mavic camp; perhaps with all the talk of takeovers and stuff there's not too much money to spend on R&D... 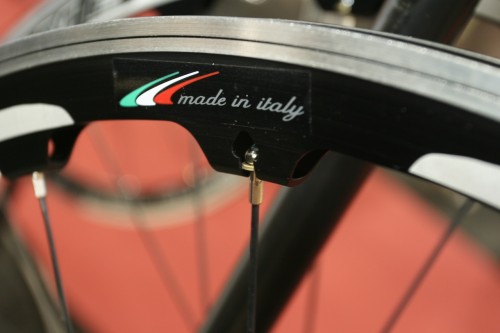 Gipiemme were showing their full range, which is extensive. The most interesting development was on their Phoenix light wheelset, which is designed for tubeless tyres. Instead of seating the nipple in the rim there's a CNC-machined bridge for every spoke, which allows the spoke to be replaced without removing the tyre. It's a neat system, although we can't help thinking it adds a bit of weight to the rim. Even more ingenious is the system they use for their MTB rims, a machined slot that has a wider section you can pull the nipple through. Gipiemme are planning to migrate this to road wheels soon. Also on the stand were the Carbon/Alu H5.5 deep section wheels, which have a structural Carbon section for this year, rather than a Cosmic-esque faring, and the Pista wheels, including a rather lovely deep section polished variant, the A40. 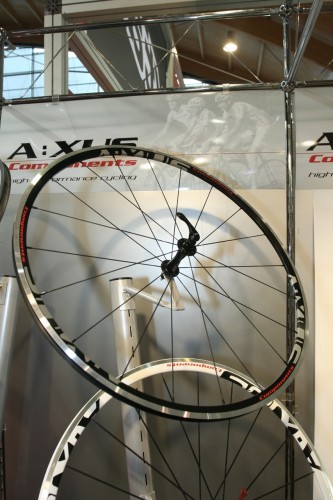 German wheelmeisters A:Xus were just one of at least ten wheel companies to be showing a particular Carbon clincher rim design that seems to be ubiquitous this year. They weren't, unlike some other companies, claiming it as their own design. "Our approach is to find the best components in terms of performance, weight and value and build them into the best wheels we can", they told us: they don't make any of the bits themselves. As well as a sub-1kg Carbon tubular wheelset, the Spica, they were also showing a €460 Alloy wheel, the Cursa, with a claimed weight of less than 1300g. Not bad... currently they're looking for a UK distributor so hopefully we'll be seeing them soon. 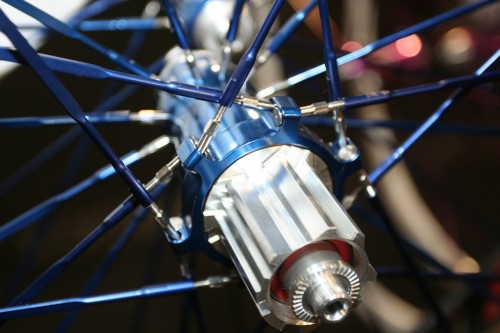 Nine Industries were showing their interesting spoke and nipple arrangement where the nipples seat into the hub and screw into the Aluminium spoke, rather than the other way round. They also use a fully modular hub system (all the components are machined in-house) so the freehub body is interchangeable. Rims come courtesy of Edge Composities for the Carbon tubulars, and they're also buying in stock of Hed's excellent Ardennes rim to build with their spoking and hubs. There's no UK distributor at the moment although the wheels are available direct, and through Just Riding Along...

1
Suspended sentence for cyclist filmed knocking over five year old in Belgium
2
Near Miss of the Day 550: Unmarked police car driver weaves through cyclists
3
"Too ridiculous": Cyclist reports motorist for driving on the pavement... and is threatened with fine for 'cycling on the footpath'
4
Mathieu van der Poel's broken Canyon Aeroad bar could have been caused by collision with car, claims his father
5
Cyclist fined after submitting dangerous driving video to police
6
Bath golf club set to be transformed into bike park
7
'Incredibly talented' police officer killed after being hit by motorist while cycling
8
Cycle campaign group urge people not to cycle over safety fears