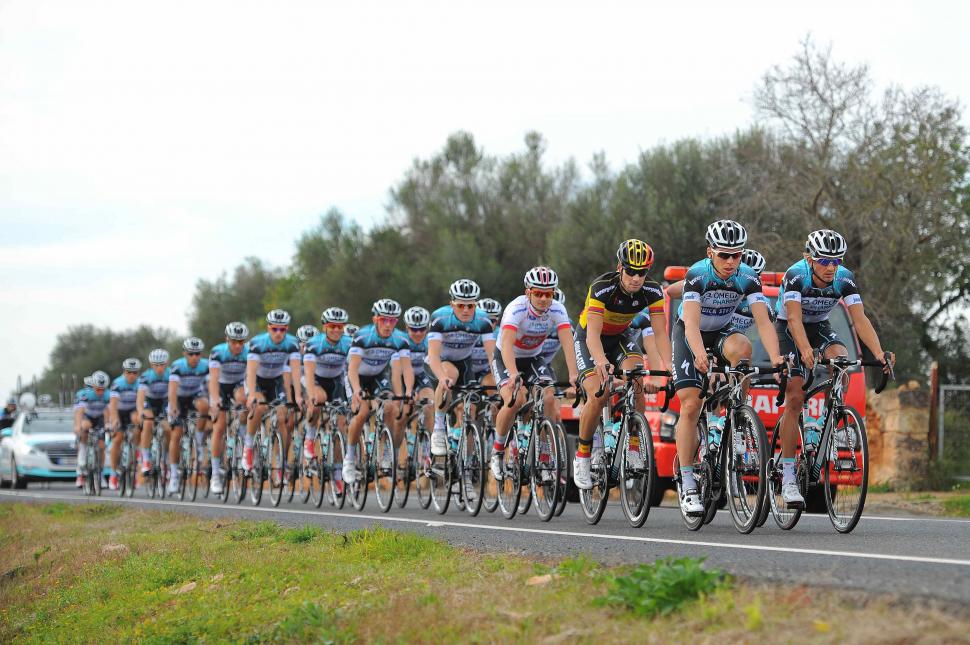 Belgian team unveils updated jersey that will be sported by Boonen, Cav and co next year - complete with Twitter handles
by Simon_MacMichael

Omega Pharma-Quick Step have unveiled the kit that Mark Cavendish and his new team mates will be sporting next season.  The Belgian team has also released a video in which some of the riders – including Tom Boonen and Tony Martin, but not Cavendish – talk about the new kit.

Made by Vermarc, it’s essentially based on the new design worn in the season just gone, but with the addition of a black on the top of the chest that appears to gradually fade into the sky blue above in what turns out on closer inspection to be something akin to an op art-inspired pattern.

There’s also a gallery of pictures taken by Tim De Waele of the jersey on the Omega Pharma-Quick Step website.

The team is keen to connect with fans through social media – witness the “I [like] #OPQS” t-shirt you can buy which in that simple message neatly gives a nod to both Twitter and Facebook – and last week riders attended a course on interacting through those and similar channels.

The theme is repeated on a jersey modelled in that gallery by Tom Boonen (in the standard colours, rather than the black, gold and red of Belgian national champion that he’ll be sporting on the road until June at least) – it includes his Twitter name down the side, @tomboonen1.

Like the standard jersey Boonen is sporting, Cavendish’s, of course, will sport the rainbow stripes on the collar and cuffs that mark him out as a former road world champion.

All riders’ jerseys – including those of new arrivals – also bear the logo that marks the team out as the reigning world team time trial champions, having won the inaugural edition of that event in the Netherlands last September.