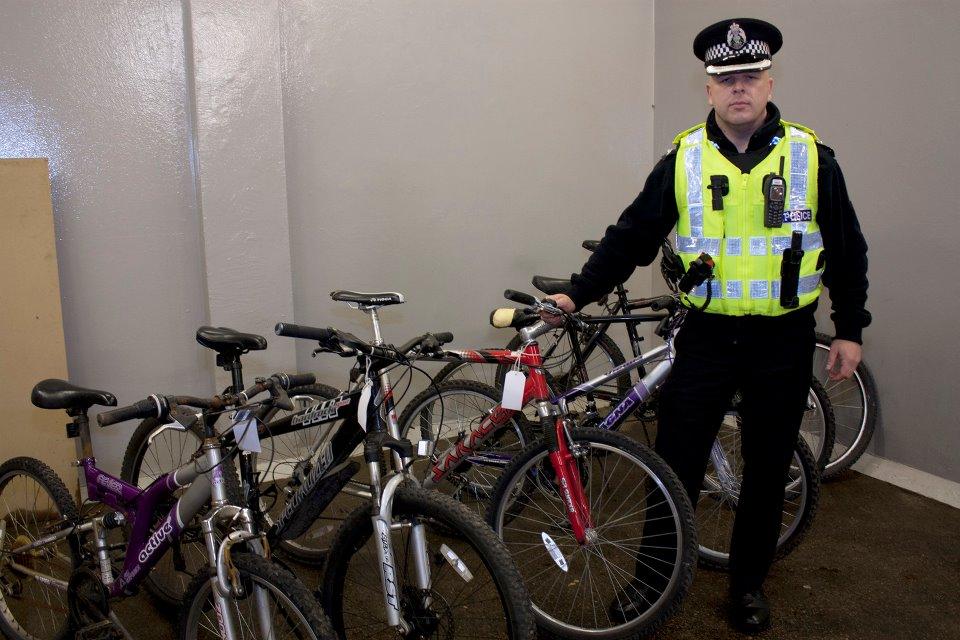 Thirty people have been charged and more than £10,000 of property has been recovered in an innovative operation to target bicycle thieves in Aberdeen.

Operation Inchbrae was planned and organised by Inspector Nick Thom in response to an increase in bike thefts in the city.

Between 1 July and 17 October, about 360 bikes were stolen in Aberdeen, an average of more than three bikes a day. The operation was launched to target bike thieves and address the problem.

Operation Inchbrae was not just about enforcement, it was a multifaceted attack on bicycle theft.

"We analysed previous bike thefts in the city, looking for crime patterns and trends," said Inspector Thom. "Similarly, we looked at the profile of criminals caught or suspected of stealing bikes and we targeted them.

"Learning from this analysis, we helped raise awareness of bike thefts in Aberdeen by circulating regular information bulletins regarding crime hotspots, recently stolen bikes and crime prevention advice, through local bike shops and cycling clubs, to ensure that we have many more 'eyes and ears' in our cycling community and among residents.

"During the operation we investigated all bike thefts, followed all leads and proactively stopped and checked cyclists, particularly in respect of lighting or road traffic offences, allowing us to check over their bikes."

Grampian Police say that the pilot phase of Operation Inchbrae has been well received and supported by the local cycling community. The police have been supplying cycling clubs in the Aberdeen area with a list of stolen bikes, the idea being that, as enthusiasts, club members will often glance at other people's bikes or possibly spot a stolen bike in the classified sections of newspapers or internet sites.

The Operation Inchbrae team have been successful in following up leads supplied by members of the public about bikes advertised in such a way at prices that seemed too good to be true.

"A cheap high-spec bike may very well be a stolen bike,” said Inspector Thom. “If it doesn't feel right - it's not right.

"The partnership approach of the operation, aided by information from members of the public about those involved, has enabled us to make significant inroads to reducing bike thefts in Aberdeen and improving the quality of life of the worst-affected communities."

More than a dozen cyclists were charged with careless cycling offences and numerous others spoken to by police regarding their standard of cycling.