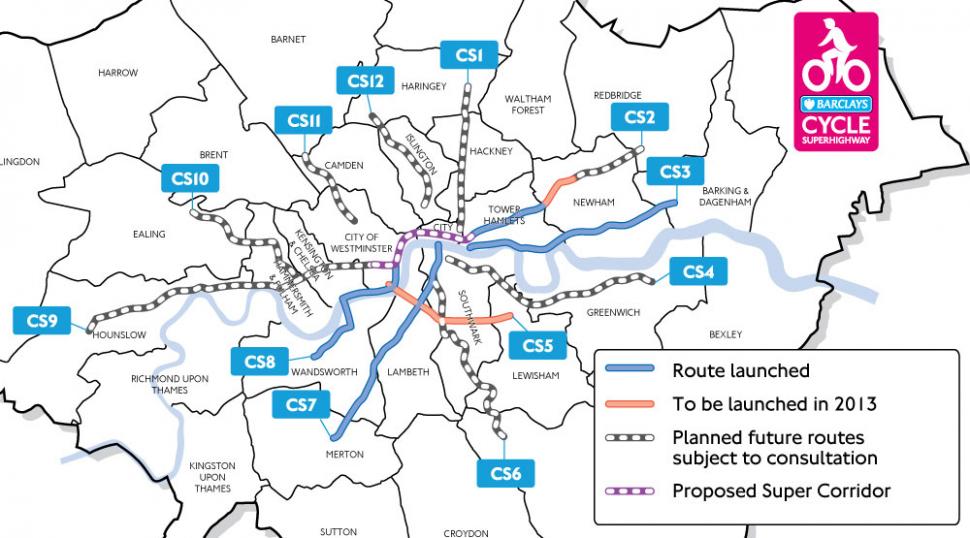 Transport for London (TfL) has opened a consultation on Barclays Cycle Superhighway CS5, which is planned to run to Victoria from New Cross, and not Lewisham as originally envisaged. The body that runs London’s major roads says that safety is a major guiding principle in the design, which will be closely analysed by cycle campaigners.

Current proposals for the route, which will cross the river at Vauxhall Bridge, heading through Peckham, Camberwell and Kennington on its way to the city centre, include ‘early start’ traffic lights for cyclists at Vauxhall Bridge Road/Millbank, an off-road short cut for riders on the Vauxhall gyratory, and the installation of 3,000 bike parking spaces along its length.

Criticism since their launch that the Barclays Cycle Superhighways gave cyclists no more protection than a lick of blue paint intensified after the death in October 2011 of Brian Dorling at Bow Roundabout.

His death, and that of several other cyclists in autumn last year, led to Mayor Boris Johnson ordering TfL to review junctions throughout the city, including those on the proposed and planned Barclays Cycle Superhighways.

It was also revealed that TfL had ignored recommendations on cycle safety at the Bow Roudabout from a report it had itself commissioned, with keeping motor traffic moving viewed as more important.

As a result, TfL’s proposals for CS5 will come under particularly close scrutiny from cycle campaigners and opposition politicians alike to gauge whether it has fully embraced the safety of cyclists in the route’s design.

For its part, TfL says that it has incorporated planned safety improvements at 52 junctions on the route, including “new advanced stop lines, cycle feeder lanes and speed reduction measures,” as well as greater use of mandatory cycle lanes (delineated by a solid white line that other vehicles are not permitted to be driven or parked in).

Following discussions with the boroughs whose territory CS5 passes through – Westminster, Lambeth, Lewisham and Southwark – TfL has today launched its public consultation, which will run until 11 January 2013.

“A lot of work has been put in to ensuring these lanes are created using the themes emerging from the Better Junctions cycle safety review process to ensure the best possible improvements for cyclists.”

TfL will be holding events outlining its plans for CS5 (proposed designs can be found here) at three locations along the route over the coming days:

Originally, the route was due to have started in Lewisham before being moved closer into the city centre to New Cross.

“As design progressed, it became increasingly apparent that in order to fulfil the Mayor’s commitment to ensure the Cycle Superhighway is of sufficient high quality, physical constraints along this stretch would limit our ability to complete the route to these top standards,” explains TfL.

“We are still very much committed to delivering significant cycling improvements on this part of the A20. Although they will not be formally branded as part of the superhighway, the route will still benefit from better cycling facilities, with 0.7km of new mandatory cycle lanes and substantial resurfacing of the roads.”