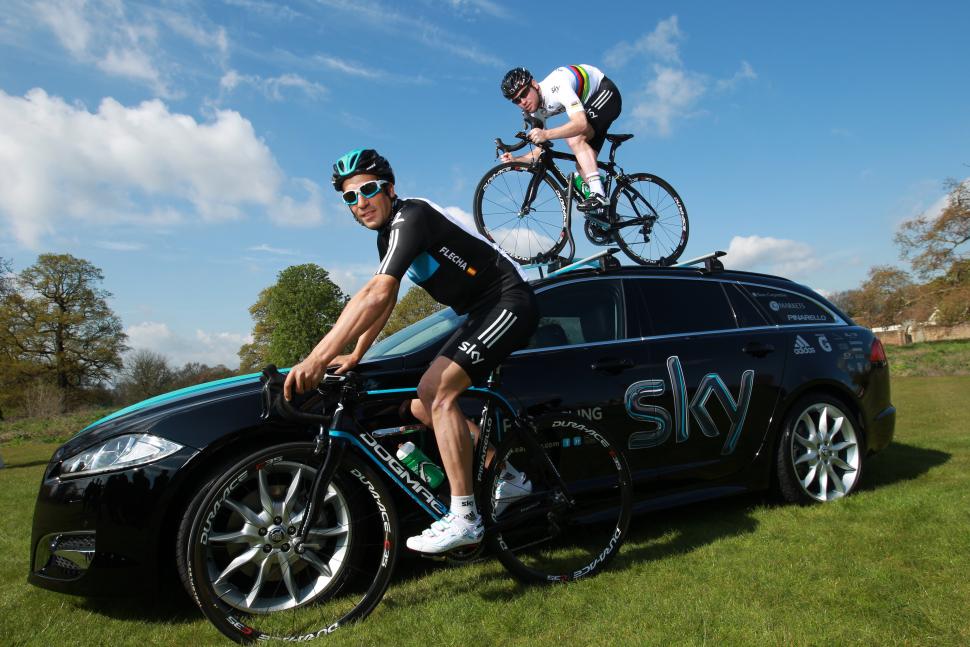 A Jaguar dealership in Exeter is tomorrow hosting a cycling event to help riders prepare for the 2013 season – and if it’s a success, the historic car marque, which supplies Team Sky with its cars, could roll the concept out across the UK.

Taking place at Grange Jaguar, Yeoford Way Exeter, EX2 8LB from 10am to 4pm, the event, called Velocity, will have a variety of free workshop activities including bike fitting and nutritional and training advice.

On show will be the new Jaguar XF Sportbrake – Team Sky were the first to get their hands on the car in April, with Mark Cavendish in the picture above trying out a new riding position for some of the tougher climbs in the Giro d'Italia.

We’ve been told that Bradley Wiggins’ time trial helmet from the Tour de France will also be on display along with other helmets from the Kask range and, hopefully, the £25,000 road bike launched this year by Jaguar’s former sister company, Aston Martin, which Grange is also a dealer for.

Coaching advice will be offered by Koolstof, while Torq and Paligap will be there to talk about nutrition, and alo attending will be staff from Exeter Massage Centre and Stuart Bergman, organiser of the Moor 2 Sea and Dartmoor Classic sportives.

Bike Shed Exeter will also be there to show off the 2013 Trek range, while I-ride Plymouth will be providing bike fitting advice, and Mid-Devon CC are bringing their junior squad who will be talking to kids and parents about getting involved in cycling.

If you bring your own bike along, there’s also a 1km turbo trainer challenge - small prizes will be on offer from some of the exhibitors, and Jaguar are also giving away ten ticket to the London Bike Show.

Place are limited and can be booked alastair.mills [at] grange.co.uk (here).