We saw the launch of the GoPro Hero HD3 last week, and today we've learned of another coming to these shores. The Nilox Foolish is a full HD unit from Italy that has some very interesting little touches and it's now being distributed in the UK by Windwave

At first glance you'll probably think, "That looks a bit like a GoPro," and you'd be right: it does. There's some different stuff going on here though.

For a start, the Foolish has an LCD viewfinder. Nilox have come to the conclusion that you're not always going to need one, and so it's removable. That makes for a much smaller package, but means you can't quite be sure where the camera is pointing. Except with the Nilox, you can. Because it has a laser pointer built in to allow you to target your shot; That's an excellent idea in our book.

The Nilox comes with two waterproof cases, for the camera with and without the LCD screen. Both are IP68 rated to a depth of 60m, twice what most camera cases can manage, so if you like to mix cycling and deep-water Scuba diving (as separate hobbies, rather than trying to do them at the same time) then the Foolish is certainly a camera to look at. Operation with the case on could't be simpler: one button for stills and one for video. There is a remote available too, but that's not coming into the UK just yet. 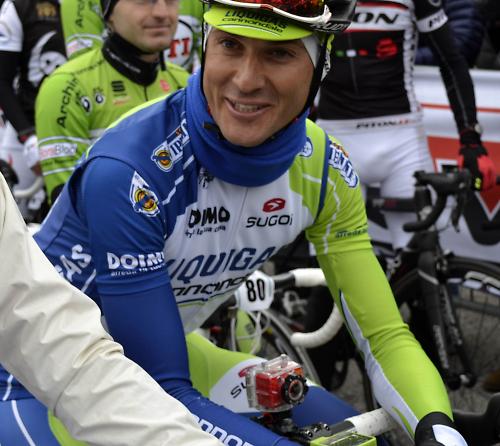 Ivan Basso using the camera at a Gran Fondo ride

The super-wide lens has a 175° field of view and can record in a number of formats. Still photos are up to 8MP and the video goes up to 1080p at 30fps. 720p recording is possible at 60fps – there's also a 4x digital zoom at this resolution – and there are lower quality modes too. The camera will ship in the UK with an 8gb micro-SD card so it's ready to go out of the box.

You get a bunch of mounting options. The camera itself has a standard tripod screw and there's flat and curved surface holders included. The mounting hardware looks to be the same as the likes of GoPro and Muvi use, so there's plenty of aftermarket extras knocking about.

The Foolish will retail for £199.95 in the UK and will be available soon; we'll get one in for testing as soon as we can.