London-based Condor Cycles were at the Cycle Show in Birmingham last week and showed their full range of 2013 bikes, including a limited edition Lotus bike, a new stainless steel frame and a major update for the Barrachi, plus a few changes and new colours to other bikes. 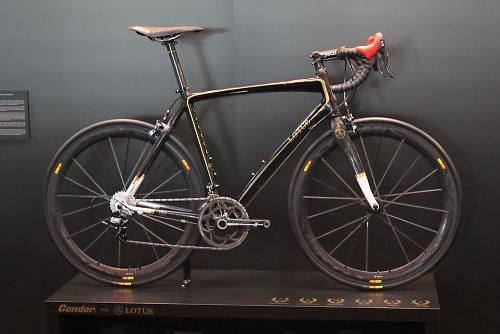 Lotus are no strangers to cycling. Remember the Lotus Type 108? Chris Boardman won a gold medal aboard it at the 1992 Barcelona Olympic in the 4000m pursuit setting a new world record in the process. The two companies have actually been working together for about a year and first launched the two bikes in the range in London and Monaco back in July. They're ready to launch them properly now and this bike, alongside a matching Lotus Elise, took pride of place at the show.

Aside from the branding on the two Type 1 LC bikes (named after the cars) that mimics the classic colours that Lotus is historically famous for, they two companies will be working closely together on developing the next generation of Condor racing bikes. Lotus, as any motoring enthusiast will tell you, built their reputation on incredibly lightweight cars with a well tuned chassis that many say are the best handling cars in the world. Richard Hill, the aerodynamics specialist involved with the Type 108, is involved once again and will be heading up the partnership. Condor tell us “their knowledge of aluminium could be used at the bottom bracket shell, maybe inserting a rod or sleeve to create stiffness without affecting weight or perhaps its where the dropouts bond into carbon.” It still early stages for the project however: “We don't know the direction yet but we are looking at it closely.” Sounds exciting to us. 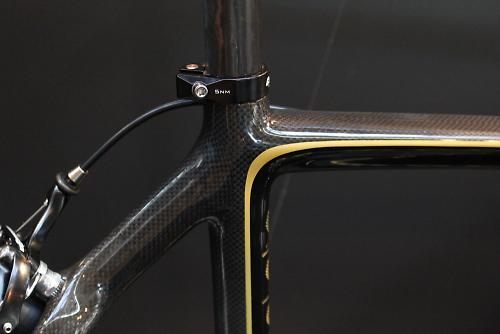 Kristian House and Ed Clancy are involved in the project so if you see them out on the roads training in the next couple of months, it might be worth paying attention to what they're riding.

Condor are keen to state that unlike some other collaborations we've seen recently, the Condor/Lotus bikes will be realistically priced. The bike pictured will cost £5,200 and be limited to just 64, on account of both companies starting in 1948 and they're each celebrating their 64th year. 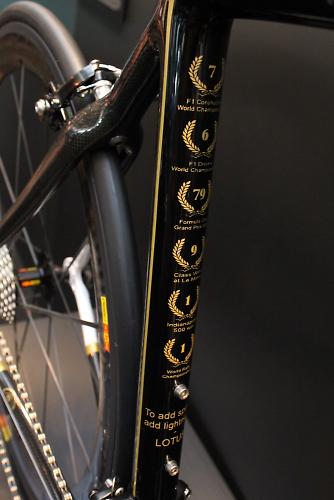 The bike is well specced with Campagnolo Chorus, Mavic Cosmic Carbone SLR wheels and matching Fizik Arione saddle and bar tape to mimic the upholstery of a Lotus car.

Who thought steel was dead and buried and not suitable for racing? Condor's Super Acciaio takes steel frames to the next level incorporating the latest developments to make it truly race worthy. It has been two years in development and was launched at this show last year, and will be available to buy later this year. Condor has a strong heritage of steel frames so it's only right they should be pushing it towards the metaphorical envelope of what is currently possible. The idea behind the frames birth was to make a steel frame that can compare to a carbon fibre frame. Light and stiff enough to race with all the unique traits of steel.

And race worthy it is proving to be. Dan Craven, instrumental in the early testing of the frame, raced a prototype at the Smithfield Nocturne last year. Success has continued with Rapha-Condor-Sharp rider James McCallum winning the Scottish Road Race and Criterium Champs and finishing on the podium at the UCI CiCLE Classic. 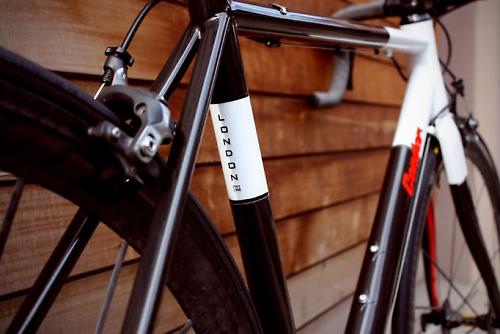 Incorporating features that are rapidly becoming standard features in carbon frames, but until now never seen in a steel frame, has allowed Condor to deliver an exceptionally stiff frame. That means a BB30 bottom bracket and a tapered head tube, and an ovalised top tube to increase torsional stiffness. Geometry is borrowed from the team issue Leggero.

Condor explained to us that the development was far from straightforward: “We worked very hard to thin the tubes where material was not required and the stays are quite small this helps keep the weight closer to a carbon frame. It was quite difficult initially to get the frame lighter without compromising stiffness, but we've got to a frameset that is both comfortable to ride but also perfect for accelerating and smashing around a race course.” 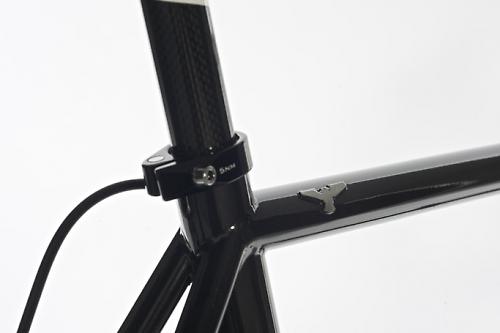 While the Super Acciaio is pushing at the boundary of what is possible with steel, the new Acciaio Stainless is their first stainless steel frameset. We love stainless steel here at road.cc and they've opted for the beautiful Columbus XCr tubeset. Condor is making these to order and each will be built by hand in Italy, and finished in any colour you want. They showed this fetching dark blue which we think looks superb. There's some lovely details the closer you look, including the scalloped seat tube, pinch bolt seat clamp design and etched dropouts. Stainless steel frames don't come cheap however and the Acciaio Stainless frameset will be £2,799.99. That includes s carbon fork, headset and custom colour or geometry.

It is now the season for mudguard-equipped bikes and the Fratello, a classic of Condor's range, is born from the traditional design brief for such bikes. A Dedacciai triple butted steel tubeset is TIG welded by hand in Italy and features full rack and mudguard mounts, clearance for wide tyres and sorted geometry. Condor use their own long reach caliper brakes in their build kits.

Few changes to the latest model except for the new Duck Egg Blue colourway which looks resplendent in the right light. The frame is supplied with a full carbon fork, including the steerer, for £599.99.

A fixed/singlespeed version of the Fratello, the Tempo, is available if you want a simpler setup.

The choice of the Rapha-Condor-Sharp racing squad for the past four years, the Leggero has been updated with full internal cable routing for Shimano Di2 and Campagnolo EPS groupsets. While not the lightest carbon frame in the world, the team apparently prefer a little extra weight and they like the stability and smooth ride of the Leggero. And let's not forget that it has been ridden to two consecutive King of the Mountains titles at the Tour of Britain. 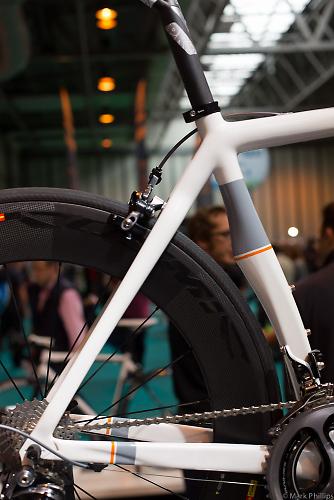 Next year the frames have had their livery refreshed and orange is introduced onto the frames with the base colours in black or white, with matte detailing. A team edition will be launched in the earlier part of next year with limited numbers available.

The Baracchi has been given a major bottom bracket shell up refresh for 2013. Sitting just below the Leggero in the Condor bike range pecking order, the new frame now has a tapered head tube and it's slightly taller at the front and longer in the wheelbase than the racier Leggero, so it's more suited to those wanting a touch of comfort. It's also fully compatible with electronic groupsets with internal cable routing. They're added a new rear triangle to the Baracchi which has brought the weight of the frame under the Leggero. 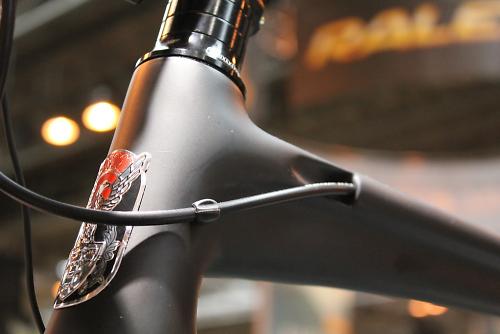 Condor's Neil Manning was keen to tell us about how the fact it is hand made with cut and wrapped tubes, rather than popping out of a mould, allows them to easily offer custom frames to customers. There's no extra cost involved, but you will have to wait a little longer. Oh, and it's lighter than the Leggero as well. Available in January 2013 it will cost £1699.99 and that includes a fork and headset. They'll offer two colours, matte black with a white seat band and red detailing and a black and blue option.

Cyclo-cross season is firmly here, and the Terra-X is pictured here fitted with disc brakes – both frames come with canti and disc mounts giving you the choice. It's also a good way of buying a future-proof frame, buy one and stick cantis on now and upgrade to disc brakes when they start to really emerge in the next couple of years.

The Bivio-x (frameset £649.99) features a triple butted aluminium frame and gets extras like bottle bosses,  mudguard and rack eyelets, so you can use it for other riding aside from cyclo-cross. The Terra-x (frameset £799.99) is aimed squarely at racing so ditches those extras in pursuit of purity of purpose. It's also has a lighter scandium downtube and a beefier carbon fork and new for 2013 is a nod towards the Belgian 'cross racing scene with red, yellow and black paint scheme.

Disc brakes are the Next Big Thing in cyclo-cross (though it's taken a while to mature). On this subject Condor comments: “Discs are becoming more and more popular but it is a commitment [not to mention the expense] for a cyclo-cross racer to switch all their wheels to disc so having both options allows the riders to upgrade in to discs in the future when hydraulic disc options become more available.”

We love Ti (well, I do) so no surprise that the other Condor to snag my eye was the Gran Fondo Ti… a bike to brighten even the bleariest eye. Made from triple butted Dedacciai K19 3Ai.2.5v Ti tubing laser etched, with raw Ti dropouts and a Condor Pioggia carbon fork - the basic frameset will set you back £2199.99 or as a complete build from £2949.99… my eyes have started to water now. Condor's Classico (£899.99) is rich in cycling heritage as a good reproduction of early 20th century road bikes updated with some of the latest technology. The Dedacciai SAT 14.5 tubeset is used for the frame and a classic 1” Condor threaded steel fork is slotted into the head tube.

Check out their slick website for more details of these bikes and the rest of the range www.condorcycles.com

Thanks to Mark Phillips for use of some of his photos (http://trackstanding.com/)