...they look nuts but sound well thought out and weigh very little
by Mat Brett

These wheels from Mad Fiber are some of the most distinctive we’ve seen in a long time… and that’s saying something because loads of new carbon wheels have been released lately.

Mad Fiber is a specialist wheel brand from Seattle in the US and they make their own wheels in the US rather than out-sourcing production abroad.

The idea behind the design was to forget about substituting metal parts for carbon, and instead produce wheels that are designed around carbon as a material. There’s so much technology going on here that you really need to visit the Mad Fiber website to check it all out. These wheels are designed to be lightweight, aerodynamically efficient and very strong. To talk you through a few key features, the rims (60mm front, 66mm rear) aren’t produced in a normal way, they’re made up from three separate parts: the two sidewalls and the tyre seat. Mad Fibre says this allows them to make the rims much more precisely than if they used a bladder mould inside the rim. The spokes are bonded to the rim sidewalls, dispersed the load across a large area of the tyre seat. Those spokes are just 0.7mm thick and, although the outer layers you can see are a 12k carbon-fibre weave, the inner layers are unidirectional carbon. If you’re worried about the carbon snapping, Mad Fiber reckon they can handle 40 times the load they’re ever going to need to and can twist up to 90 degrees if anything gets caught in your wheel. The hubs are interesting too. Rather than coming out perpendicular to the hub body, the flanges are aimed towards the anchor point on the sidewall to keep the load path straight.

And your final tech fact for the day is that the wheels aren’t constructed, as you might think, as rims, hubs and spokes and then the three elements all put together. Instead, the spokes are first bonded to the relevant sidewall and hub flange without any tension. Only once everything else is assembled are the flanges drawn from the centre of the hub to the edges, thereby applying the tension. It’s all very impressive stuff. 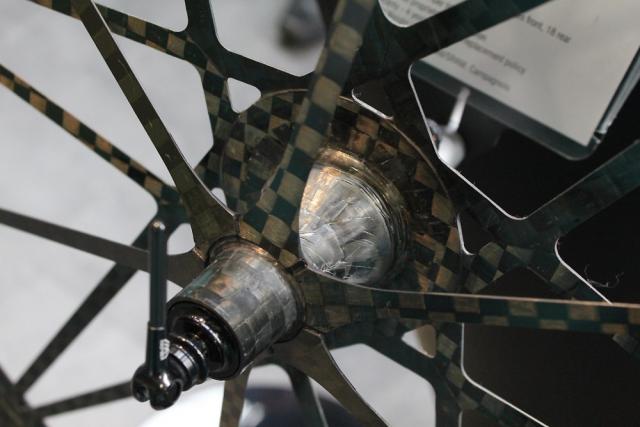 You might think those hubs look unfinished. Mad Fiber could easily have added another layer of carbon there to neaten things up, but it would have been purely cosmetic so they’ve opted to leave them as is.

The wheels are available in both tubular and clincher versions, with Shimano/SRAM and Campagnolo compatibility and, as you might have guessed by now, they’re not cheap – £2,500.

According to Mad Fiber, the tubular model is 1,085g a pair and the clincher version - which has an alloy tyre seat rather than carbon - just 1,300g, and there’s no rider weight limit. Titanium skewers and proprietary brake pads come as part of the package. You get a four-year warranty and there’s a crash replacement policy – which might come in useful because you’re not going to be finding the right spokes down at your local bike shop. 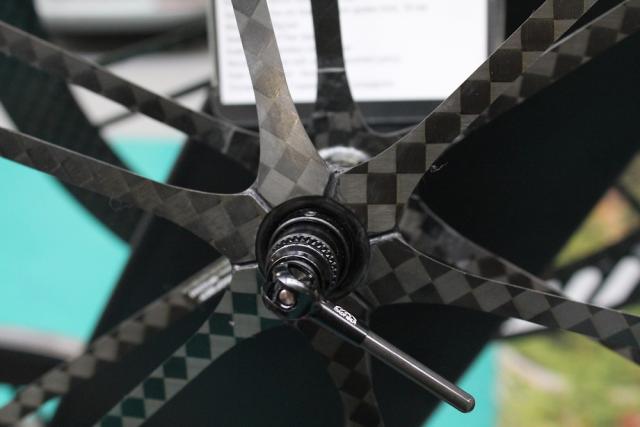 In terms of aerodynamic performance, Mad Fiber don’t give the usual statistics in terms of grams of drag, time saved over 40km or anything like that. What they say is, “Mad Fiber wheels are well within the norm for aerodynamic drag with aero wheels, and can be exceptional in high yaw situations. Given the significant weight advantage Mad Fibers enjoy over other aero wheels, there’s no doubt Mad Fibers would prove advantageous in the real world, where climbing performance and acceleration start to be factors.”

Sounds a bit woolly, doesn’t it? We’ll see if we can get any more concrete info. In the meantime, visit madfiber.com or see the wheels at this weekend’s Cycle Show at Birmingham NEC.