Shimano Alfine Di2 has broken cover here at Eurobike and in a rather unexpected place, not as you might expect on the latest top end urban machine from the likes of Specialized, Trek or Cannondale, but in a coup for the little guy on the new Cooper Avus. We reported back in March this year, that Shimano was introducin an electronic shifting Di2 version of their Alfine hub gear groupset but so far they've proved as rare as hen's teeth - even Madison Shimano's UK disbributor doesn't have any yet. Shimano's rationale in bringing out a Di2 version of Alfine is that sticking a top end hub gear together with electronic shifting will give the ultimate in low maintenance, easy-shifting performance. Plus the shifters look cool. 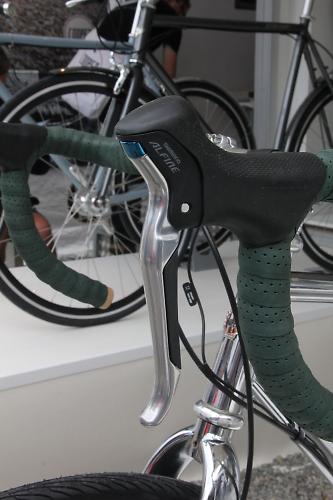 Shimano have always said that they were in no rush to produce a drop bar shifter for the Alfine hub - leaving the way clear to US company Versa to meet the obvious demand for such a thing. So its interesting to see a Shimano drop bar lever on the seemingly even more niche Di2 version of Alfine 11. The new shifter certainly looks the part - and Shimano must think so too cos word at the show is that they are now working on a drop lever for the mechanical version of Alfine. 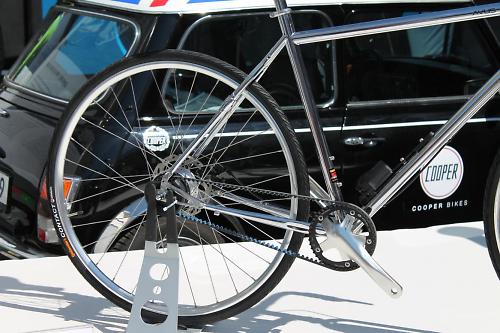 Whatever, the new Di2 set-up certainly looks the part on Cooper's rather handsome steel tubed Avus. Cooper have taken things a step further by adding a Gates belt drive, to the 11 internal hub gears, stainless steel frame which also comes equipped with mechanical disc brakes too - the show prototype was fitted with ProMax discs but the production version will come with Shimano discs. It's all finished off with a Brooks Swift saddle and leather bar tape for a very classy look. At the moment Mike Cooper told us he's pondering whether to make the production version of the bike in Titanium rather than stainless steel just to make it the ultimate, ultimate as it were mind you that might have an ultimate ultimate effect on the price too. Which, as you ask is currently expected to be around the £3,000 mark.