...Including a new titanium Equilibrium and a new range of Volant aluminium road bikes
by Mat Brett

We’re just back from visiting Genesis and we can show you their new titanium Equilibrium, their new Volant aluminium road bikes, and the updates on the rest of the range for 2013.

We featured a prototype of the Equilibrium Ti back in February when we visited the Icebike show. This (main pic) is the final version.

The rest of the Equilibrium bikes (see below) are steel so a titanium version marks a significant departure. It’s built to the same geometry as the steel models and, like them, it’s designed as a practical, do-it-all road bike. 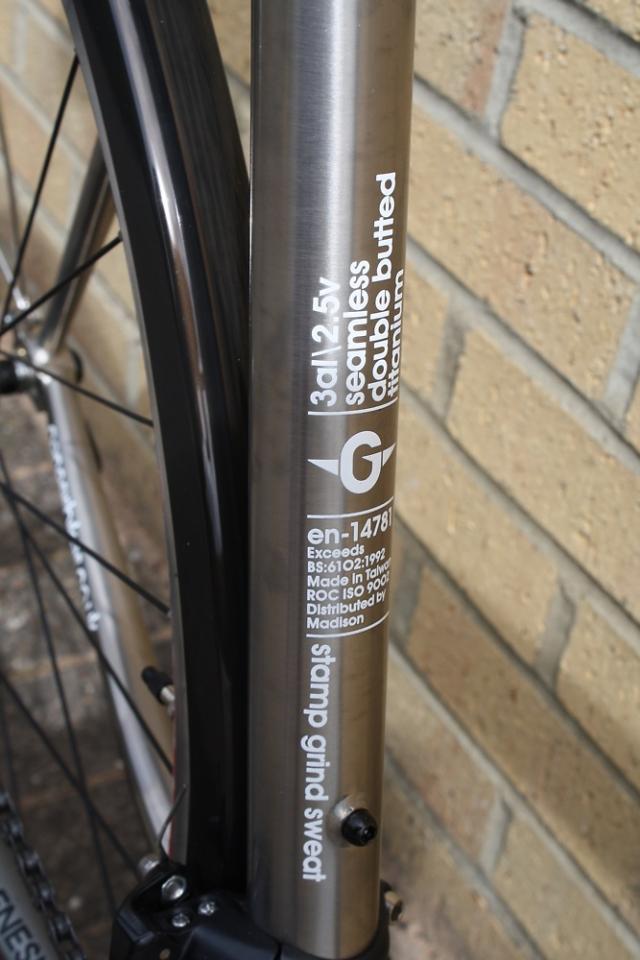 The frame is made from seamless, double-butted titanium – see, it says so on the frame lest you be in any doubt. Ti of the 3Al/2.5V variety is the most common type used in bike building. 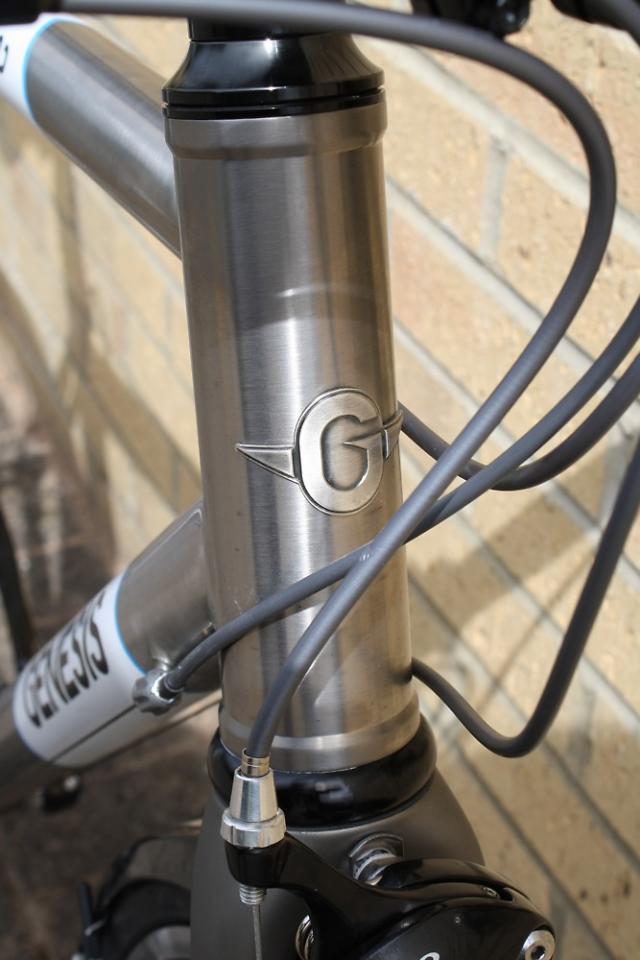 The headset is XX44 size so you can run a straight or tapered fork steerer. Genesis go with tapered, running a 1 1/2in external headset cup at the bottom for some extra front-end stiffness. The fork is carbon-legged with an alloy steerer, built for long-drop brakes and with mudguard eyelets. There aren’t too many of those about so sourcing one to slot into the front of the Equilibrium was a bit of a challenge.

The back end, in contrast to the front, is designed to be forgiving for plenty of long-ride comfort – a key feature of the existing Equilibriums - hence the super-slim seatstays. They’re actually slightly flattened so the profile width is slightly greater than the height to give a little more in that direction. 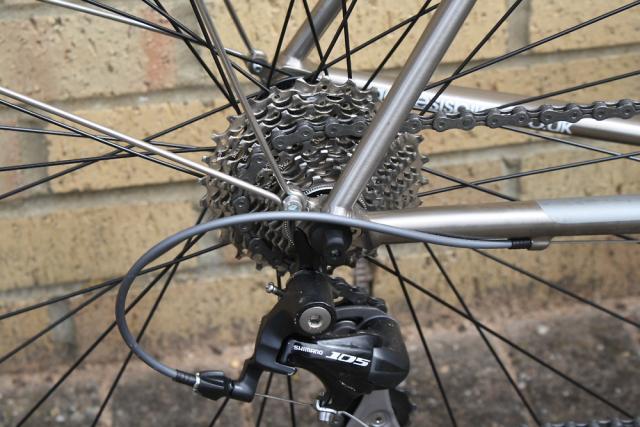 The Equilibrium Ti is intended to be a four-seasons bike so rather than giving it a high-end racy groupset, Genesis have gone with mid-level Shimano 105: solid, reliable stuff that’ll last the distance.

The chainset isn’t 105, though. It’s a non-series compact option – Shimano’s R-565 – matched up to a 12-28T cassette. The brakes are another departure; they’re long-drop Tektro R317s so you can easily fit mudguards in there. The mudguards fitted in our pics aren’t part of the package, by the way. They’re just there to show the possibilities.

Of course, the step up to titanium means the Equilibrium Ti is far more expensive than any of the steel models in the range. The complete bike will set you back £2,299.99. The frame and fork package is £1,499.99. More new models come into the Genesis lineup in the shape of the Volant aluminium road bikes – again, we first mentioned them back in February. There are four Volant models ranging in price from £649.99 to £1,249. The idea is that they have a more of a racy look and feel than the Equilibriums, with tighter clearances and a geometry that splits the difference between the Equilibriums and a road race machine. They come with straight frame tubes – there’s no hydroforming here – sloping top tubes and carbon-legged forks, and they’re designed for all-round road riding with an emphasis on speed. We can see them being used a lot for sportives and the like.

All four models come with oversized XX44 head tubes although Genesis have chosen to use internal lower headset cups and straight 1 1/8in alloy steerers throughout. The 10 (above), 20 and 30 are all built around the same 6069 ALX-9 double butted frame. The £799.99 10 has a full Shimano Sora 9-speed groupset – and Sora now uses two finger levers for shifting up and down the cassette, rather than one finger lever and a thumb lever. 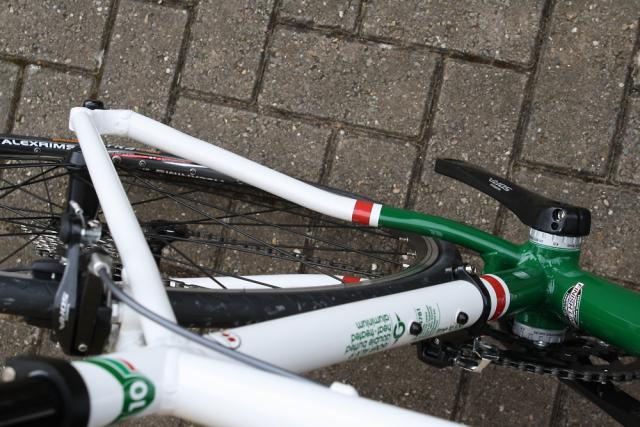 The £999.99 Volant 20 comes with full Shimano Tiagra and the £1,249.99 30 is 105 with a non-series chainset. It looks like you’re getting exceptional value across the board here. The finishes make them look pretty distinctive too, unlike many Identikit road bikes in this price range.

The Volants will be available from November.

The rest of the range 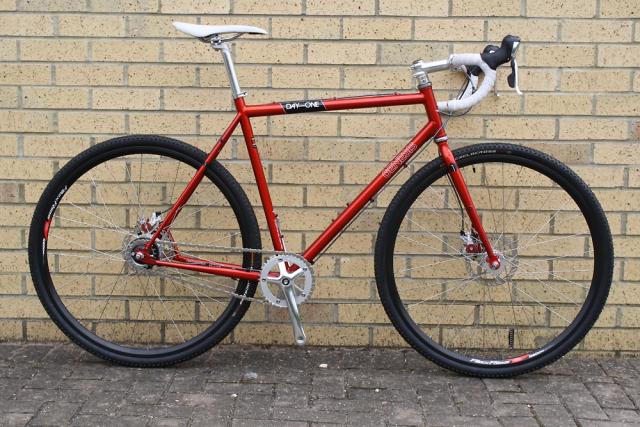 This model is Reynolds 520 steel and the eight-speed hub gear is controlled by Versa STI drop-bar levers because Shimano don’t offer anything similar. The cyclocross/commuting Croix de Fer goes up £50 in price too and it gets a colour change too – it’s now black rather than white. We should have one of these arriving at Road.cc for review any day now, so keep an eye out for that. It has become a modern classic so we’ve high hopes. The Croix de Fer is made from Reynolds 725 steel and comes with a cromo fork plugged in up front. The drivetrain is Shimano Tiagra with Avid BB7 brakes acting on 160mm rotors to provide all-conditions stopping power. 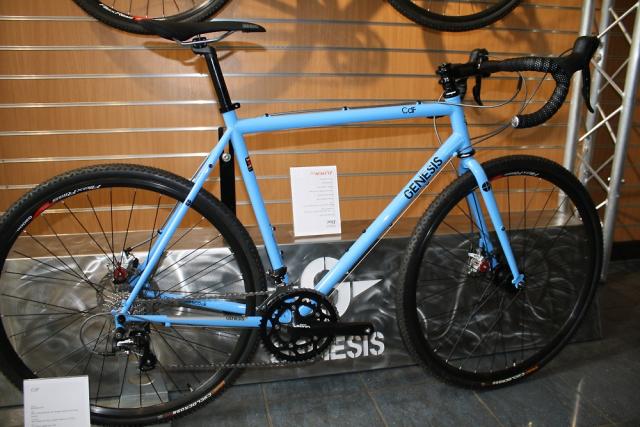 Don’t get the Croix de Fer confused with the CDF – they’re two entirely separate bikes: similar, but different. The CDF has the same geometry as the Croix de Fer but it’s Reynolds 520 with a Sora group and Avid BB5 brakes. It gets the new, improved Sora groupset for 2013, in black rather than silver, but other than that it’s pretty much the same as before and if you want more of an idea what that's like check out last month's review of the 2012 CDF. The other cyclocross bike worthy of note is the £1,199.99 Vapour Disc which has been updated with a new XX44 oversized head tube and a tapered (1 1/8in to 1 1/2in) fork. This is Genesis' no compromise 6069 triple-butted alloy CX machine although it still comes with eyelets for mudguards and a rack if you want to ride it on the road as well as on mud.

We're so darn early with everything that details of the 2013 range aren't on the Genesis website yet but they will be soon.