Carbon road bike in a sportive-friendly geometry
by Mat Brett

The HammerAndTongs is designed as the ultimate all-rounder and at first sight it certainly looks like an interesting bike.

We first showed you the revamped Pearson range way back in October. Pearson, who have shops in Surrey and London, have been around for over 150 years. Yes, 150 – they were established in 1860. They’ve redesigned their range for 2012, attention-grabbing model names and striking graphics setting them apart from the crowd. If you think HammerAndTongs is a strange handle, how about Goes Like Stink, A Cunning Plan, or I’ll Get Me Coat? The HammerAndTongs is available as a frameset for £1,399, or as the complete Shimano Ultegra-equipped bike that we have here for £2,500. The frame is a unidirectional carbon fibre monocoque and it comes with an oversized head tube for increased stiffness up front. The fork is a carbon monocoque too.

Three sizes are available: 51, 54 and 57cm. We have the 54cm model in on test here at Road.cc. The size is based on the measurement of the seat tube (centre to top), but the top tube slopes downwards so the frame is actually bigger than the official size would suggest. The effective top tube (the horizontal measurement rather than the length of the tube itself) is 56.6cm. 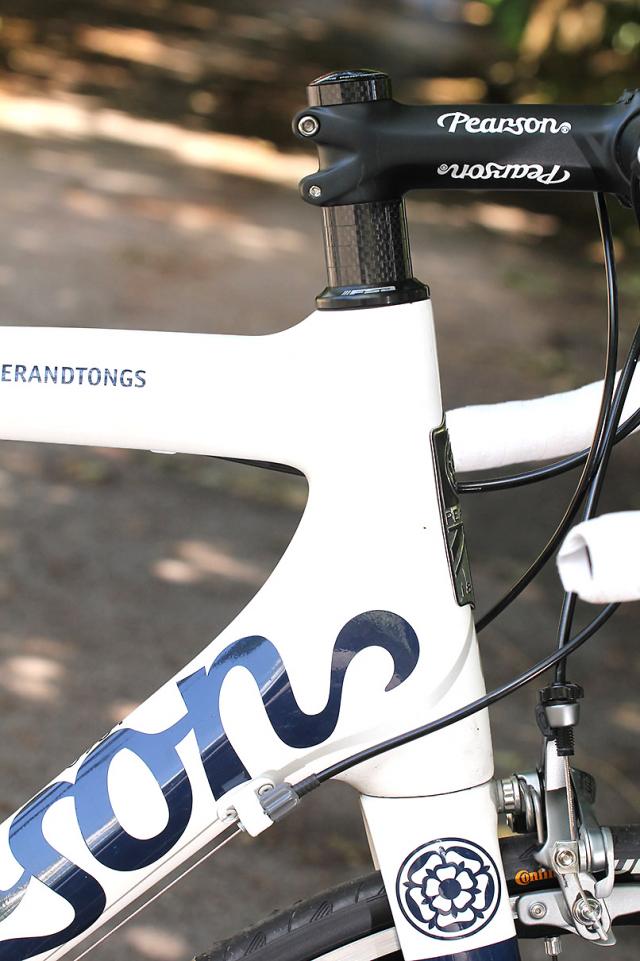 The head tube is 19.5cm, which is tall for a bike of this size. To put that in perspective Specialized’s Roubaix bikes in a 56cm size, with a 56.5cm effective top tube, have head tubes that are 0.5cm shorter – and they’re known for being high at the front.

The taller than normal head tube lifts the bars. That gives you a fairly relaxed ride position when you’re resting your hands on the tops or the hoods, putting less strain on your lower back. Some people go for a frame with a shorter head tube and fit a stack of spacers underneath the stem to get a similar ride position, but that sacrifices a degree of stiffness up front. Our bike arrived with plenty of spacers too, really pushing that front end height up. The groupset components are from Shimano’s Ultegra range. Ultegra is the second-tier line-up and it loses out very little to Dura-Ace in terms of performance. Of course, Dura-Ace is going 11-speed for 2013 but for the time being they’re both 10-speed. Ultegra is excellent kit and it has the bonus of not having Dura-Ace’s prestige pricing. Of course, it’s not cheap either but in our experience both the shifting and braking you get from Ultegra components are superb. The wheels are Mavic’s Ksyrium Elites. Ksyriums have been around for well over a decade now. Although they’ve developed over the years, they’ve always set standards for combining strength with a light weight. Mavic’s official weight for a set of Elites is a highly reasonable 1,550g. Their best feature, though, has to be the fact that they’re so tough. We’ve used them over countless miles in the past and never so much as broken a spoke: a modern classic. The saddle is one of the most popular out there in Fizik’s Arione CX while the rest of the build mostly comprises Pearson’s own components.

The complete bike weighs in at 16.3lb (7.4kg). You can get lighter for the money if that’s a big concern for you, but that’s certainly a decent weight. If you wanted a really light build, you could always buy the frame and have Pearson put it together with a tricked out spec.

Road.cc’s Dave Arthur is on board the HammerAndTongs at the moment. Keep your eyes peeled for his review on Road.cc shortly. In the meantime, head over to the Pearson website for more details.