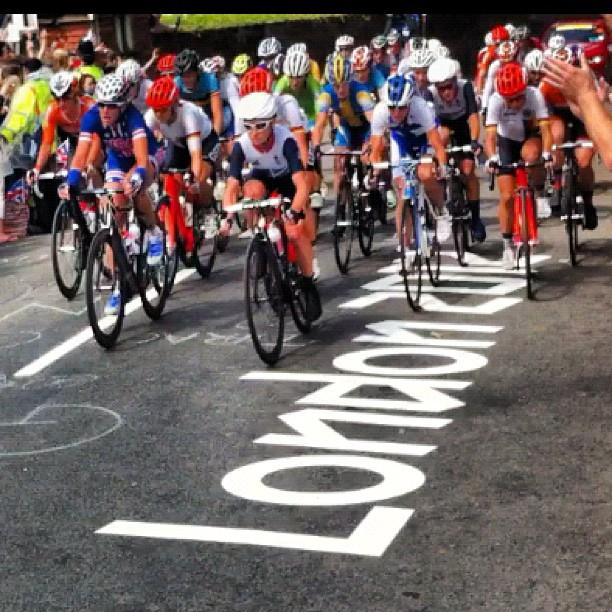 Marianne Vos of the Netherlands held off Great Britain's Lizzie Armitstead to win the sprint to the line and take Olympic gold in the women's road race this afternoon. Russia's Olga Zabelinskya took bronze. Vos and Armitstead had attacked off the front of a group of around 35 riders on the second and final climb of Box Hill, and together with the American rider Shelley Olds, later dropped, managed to bridge across to Zabelinskya. Heading into the final 40 kilometres of what was a gripping race, the trio were clear of the peloton and it soon became clear they would be contesting the medals, with Armitstead's being Great Britain's first of the Games in any sport. Heavy rain and thunderstorms contrasted with yesterday's sunshine, but didn't deter big crowds from turning out.

Since winning the world championship in 2006 at the age of 19, Vos has had an unenviable succession of near misses in trying to add a second title on the road, finishing second in each of the five years since then.

She has continued to add world titles in cyclocross and on the track, however, and also won gold in the points race at the Beijing Olympics, where Great Britain’s Nicole Cooke won the road race.

Vos is the strongest sprinter of the trio who led the race into its closing kilometres, followed by Armitstead, and that was reflected in the order the tree riders finished in.

The Briton followed her wheel throughout the closing kilometre and with chants of ‘Lizzie!, Lizzie!’ echoing down The Mall, launched herself for the line, but Vos responded to keep clear and claim gold.

Four years ago, Cooke followed up her Beijing victory by winning the road world championships in Varese, and now Vos has the chance to emulate that feat in September when the event takes place in her native country.

As in Beijing, today’s race took place in heavy rain that made conditions treacherous for the 66 riders who began the race, with standing water on parts of the course as it headed out of Central London and into the Surrey hills and a number of riders being involved in crashes.

The Dutch team had been prominent in a race characterised by attack and counter-attack, with Loes Gunnewijk and in particular Ellen van Dijk making repeated moves to try and disrupt Vos’s rivals.

With Zabelinskya having attacked the bunch on the climb at Headley to get clear, Vos and Armitstead, together with Alena Amialiusik of Belarus, had tried to get off the front of the main group shortly after Box Hill was crested for the second time.

They were soon brought back, and next it was Great Britain’s Emma Pooley who tried to head off after the Russian, but she too was reeled in.

The eventual gold and silver medalists went again, and this time the main group wouldn’t catch them, although it wasn’t until after Hampton Court that it began to become clear that barring misfortune, the fight for gold would be between the three women out in front.

The chasing group would come home a little under half a minute after the winner, including world champion Giorgia Bronzini of Italy, who finished fifth, while Cooke finished 31st and Pooley, who encountered a problem in the closing kilometres, was the last of the 40 women who finished.