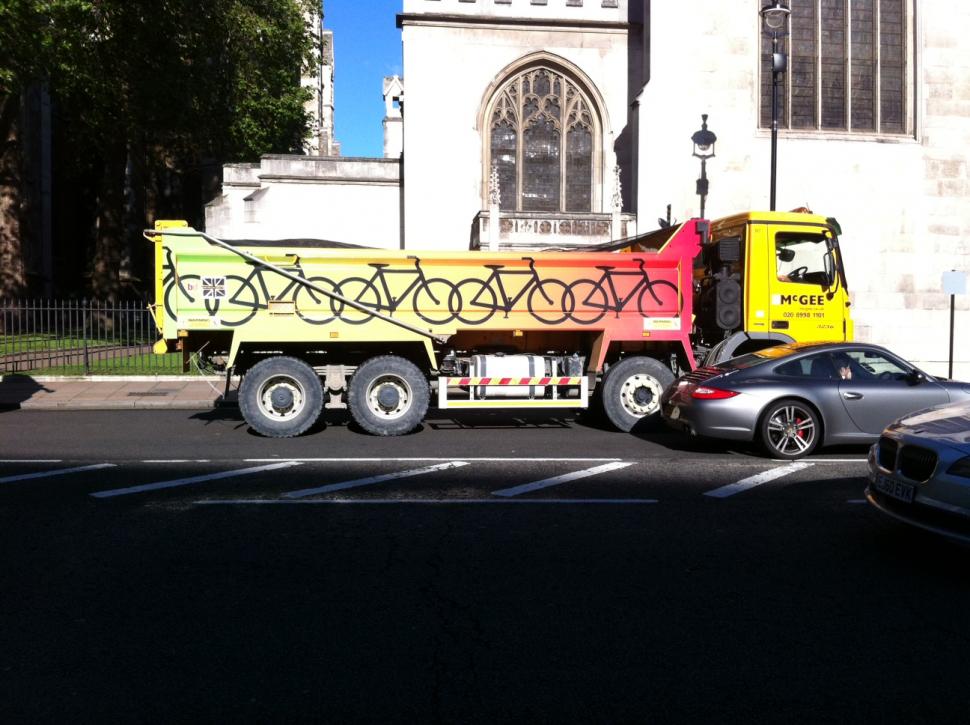 Architects, lorries, Lawrence Dallaglio - what's it all about then?...
by Sarah Barth

We recently reported on the competition to design a warning sign for cyclists to be fitted to HGVs, then on our travels we spotted this attention grabbing graphic on a tipper lorry owned by the McGee Construction firm.

Given the fearsome reputation of tipper trucks you could be forgiven for fleetingly wondering if it is some sort of macabre kill tally, a la fighter pilots of the second World War. It isn't. We got in touch with McGee Group, who own the truck, and they told us the story behind it.

"Studio AR designed the tipper wrap – it represents danger zones for cyclists around these vehicles – green to red," said Lisa Page, a spokeswoman for the company.

"We are sending a 13-tonne tipper truck on a tour of the UK’s Olympic cities to demonstrate how to cycle safely around heavy goods vehicles, with stop offs at architecture practices and key landmarks.

"Each one-on-one lesson delivered during the tour involves the cyclists exchanging places with the driver of a stationary tipper truck while a specialist trainer explains all the safety equipment and points out where the blind spots are."

Here's a video featuring world famous architect Richard Rogers and London Festival of Architecture founder Peter Murray, on their travels around London explaining why they're involved with the campaign.

Lawrence Dallaglio, who recently returned from the Dallaglio Flintoff 2012 Cycle Slam, cycling from Olympia to the Olympic Park over five weeks, has also got behind the campaign.

He said: "I am well aware of the risks posed to cyclists on the roads.

"It is good to see the construction sector taking a lead on this issue. Well done to McGee Group and Building Design for helping to build mutual respect between cyclists and truck drivers.

"It really is a two way thing - cyclists have to be more intelligent where they put themselves around trucks and drivers more considerate of cyclists.”

Michael McGee, McGee Group Director said: “Safety is of the highest importance to McGee Group and we do all we can to ensure the public are protected on and around the construction projects we deliver.

“We are focused on raising awareness of the risks posed to cyclists from construction vehicles, and this is why we partnered with Building Design to ask cyclists around the UK to exchange places with our drivers in a specially designed tipper truck by Studio AR.

“As a cyclist myself I know how important it is for cyclists to see for themselves how they can stay safe around heavy goods vehicles, and to also learn about all the safety features we fit on our tipper trucks to additionally help them.

We think it's a great initiative, and would like to see it rolled out in more than just the Olympic cities. But even just the sight of it (once you understand it) gives a new perspective to urban cyclists on what lorry drivers can - and can't - see.