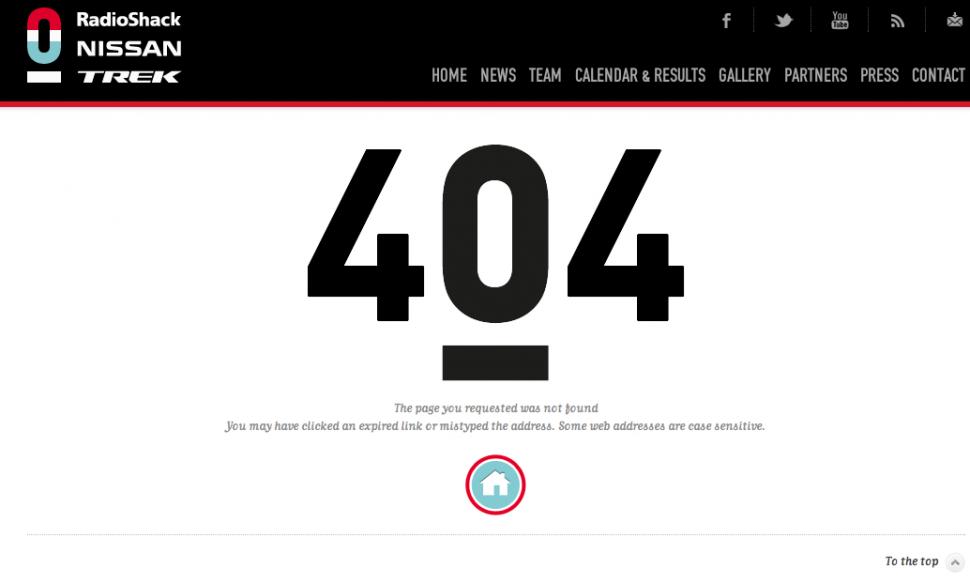 Press report in Germany claims Schlecks and Cancellara unpaid, Luxembourg paper cites €7.6m loss in first half of 2012
by Simon_MacMichael

Leopard SA, the Luxembourg-based company that holds the UCI ProTeam license for RadioShack-Nissan Trek, has issued a statement on Saturday evening denying "malicious and unfounded rumours" that it is close to financial collapse. The statement appears to be a response to reports published in newspapers in Germany and Luxembourg that highlighted alleged financial difficulties at the team, which this season has been the subject of a string of negative headlines.

German newspaper Süddeutsche Zeitung had published a report earlier on Saturday that claimed that the team’s star riders, Fränk and Andy Schleck and Fabian Cancellara, had complained to the UCI about late payment of salaries. Luxembourg newspaper Tageblatt, meanwhile, said that according to to a report from Deloitte, which audits Leopard SA, the company made a loss of € 7.6 million in the first half of 2012.

Leopard SA’s statement this evening made no reference to those latest figures, however, instead talking only about its accounts for the year to 31 December 2011.

“In response to malicious and unfounded rumours, Leopard SA, the company that owns the professional cycling team RadioShack Nissa Trek, through its Board of Directors, formally denies any situation that could be interpreted as close to collapse or to bankruptcy,” the company said.

“At its early start in professional cycling and at the time of its application for a 4 years UCI license, Leopard’s business plan anticipated an important loss to be covered by its shareholders for its first cycling season,” it continued.

The statement went on: “The financial accounts as of December 31st, 2011 are perfectly aligned with the former budget. The company’s and UCI’s auditors did not only confirm the validity of the annual accounts, but also confirmed the capacity of the company to pursue its activities.

“Leopard is also in line with its business plan for its second cycling season thanks to the support of new sponsors and to the indefectible support of its shareholders and its sponsors who have been with Leopard SA since the creation of the team,” it concluded.

While the Schleck brothers and Cancellara are almost certainly the highest paid stars on the team, they are not the only staff reported to have complained about non-payment of salaries.

Jakob Fuglsang, who has expressed his desire to leave at the end of the season, is also reported to have lodged a complaint to the UCI, whose auditors, Ernst & Young, recently visited the off ices of Leopard SA, owned by Italian-born Luxembourg businessman Flavio Becca, after three members of the team’s support staff notified the governing body that they had not been paid.

Becca himself, whose interests span food to construction and real estate, has himself been at the centre of an investigation in Luxembourg regarding alleged embezzlement, leading to his company offices being raided on two separate occasions.

Following the merger of the Leopard Trek team with RadioShack at the end of last year to create RadioShack-Nissan, it was reported that Becca would not be investing in the team to the extent he did in its debut season in 2011, although he is still understood to be the principal backer; the extent of the claimed losses in the first six months of this year, if true, would be likely to cause alarm both at the UCI and among the team’s sponsors.

Besides Leopard SA’s alleged problems, sponsor RadioShack faces potential negative publicity as a result of the US Anti-Doping Agency’s allegations that Lance Armstrong, who rode for that team in 2010 and early 2011, and Johan Bruyneel, still nominally manager of RadioShack-Nissan but absent from the Tour de France, were involved in a doping conspiracy from their time at US Postal through to last year.

While those issues relate to the period prior to the two teams joining forces for the start of the current season, it is certainly not unfeasible that the latest reports regarding Leopard SA might force it and Nissan to reconsider their involvement with the sport.

It’s not just the alleged non-payment of salaries and the reportedly poor state of its finances that have generated negative headlines for the team, which has also had to cope with the temporary loss of key riders this season such as Cancellara, who broke his collarbone during the Tour of Flanders in April.

The Swiss rider returned to win the Prologue in the Tour de France and wear the maillot jaune for the opening week of the race, where RadioShack Nissan remain top of the team classification, but those, plus Fuglsang’s overall victory in the Tour of Austria this month, are just temporary respite from the team’s apparent problems.

The relationship between the Schleck brothers and team manager Bruyneel was reported to have broken down beyond repair even before the latter became embroiled in that USADA enquiry, and the pair are reportedly involved in discussions with fellow RadioShack-Nissan riders Jens Voigt and Linus Gerdemann to set up a new team based in Germany.

Fuglsang himself, who had been due to lead the team in the Giro d’Italia before he was forced to withdraw ahead of the race starting in his native Denmark as a result of injury, was said to have been told that he would no longer be considered for selection for WorldTour races after saying that he wanted to leave at the end of the season.

He was replaced at the Giro by Fränk Schleck, who withdrew from that race early citing injury, although again that was not without controversy, with reports suggesting that the team management did not consider his condition serious enough for him to pull out of the Grand Tour. Currently the rider, third overall in last year’s Tour behind his brother Andy and champion Cadel Evans, currently lies 12th on GC, nearly ten minutes down on race leader Bradley Wiggins.

Andy Schleck, meanwhile, awarded the 2010 Tour de France title following Alberto Contador’s disqualification, missed this year’s race due to a broken pelvis sustained during the Critérium du Dauphiné, and earlier this week the team said that his recovery was slower than expected due to complications.