There's a long and proud tradition in the Tour de France of bike brands giving select riders custom-painted bikes, and that continues with the stunning ' Tourminator', gifted to Peter Sagan following his first ever stage win in the race.

Whether it's a yellow bike for the leader of the general classification, celebrating stage victories  as in the case of Cavendish a few years ago, or just to add some of the rider's personality to the bike, the Tour de France has always been the place for frame painters to strut their stuff. Show off a little, if you like.

And the latest shining example is Peter Sagan's custom-painted Cannondale Evo. The 22-year-old Slovak rider has risen to prominence this season with a string of impressive race wins and has already claimed two stages in the 2012 Tour de France. He's also gained some notoriety with his finish line celebrations... 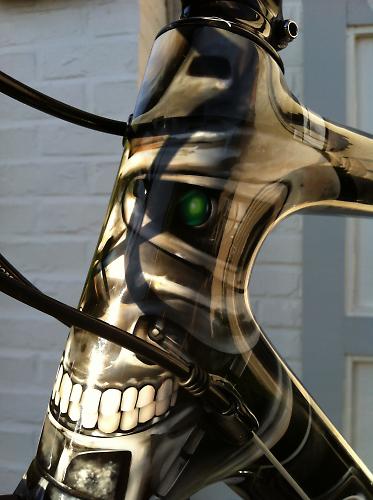 Liquigas are supplied bikes by US firm Cannonadale and they've pulled out the stops with an impressive rendition of the Terminator (the cyborg assassin played by Arnold Schwarzenegger in the classic 1984 film) across the front of the team's SuperSix Evo Hi-Mod. Interestingly, in a race where the very latest products are usually raced, the team are on the current Evo and not the new and lighter Evo Nano, which cuts about 40g using an improved carbon layup. We'll have more details on those changes soon.

Why the Terminator? It was in the Tour of California, where Sagan won an incredible five stages, that the Cannondale Factory Racing Team dubbed him the Terminator, on account of his knack for getting through his fair share of wheels and tyres as a result of his power and strength.

This led to a bet between Sagan and Cannondale’s Sports marketing director Rory Mason: win another stage and the Terminator bike would be waiting for him. All he had to do was win a stage at the Tour to claim it, which he did with an audacious finish on the first stage. Sagan will now ride the rest of the Tour on his very personalised bike; see if you can spot it. Sagan's Cannondale SuperSix Evo Tourminator differs slightly from that which you can get in the shops with a custom geometry to fit his 6ft frame. We have no details on how exactly it's different to a stock frame but the usual request by professional riders of this height is for a longer top tube, without the increased head tube length that going up the size range results in. With the UCI's ever-changing rules, we're not sure where the use of a custom geometry frame fits in with their desire for riders to race only on production kit...

The frame wears the same components as Sagan's Liquigas team mates, with a full SRAM Red groupset and Cannondale's very light Hollowgram Si SL chainset. Mavic Cosmic Carbone Ultimate wheels, Speedplay pedals, a Fizik Aliante saddle and FSA cockpit complete the build. The weight is reported to be bang on 6.8kg. The SRAM hoods have been colour matched with the frame.