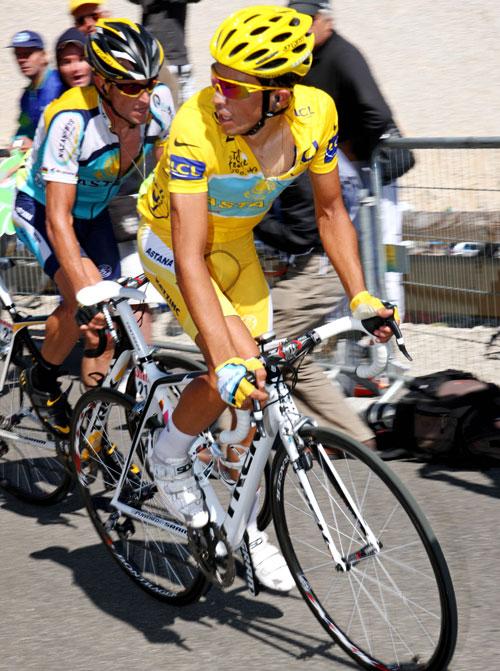 Armstrong and Contador: the gloves are off

Contador: "no admiration for Armstrong". Armstrong: "Drivel"...
by dave atkinson

Well there was a lot of talk during the tour about the relationship between Astana's two stars, Alberto Contador and Lance Armstrong, but radio silence was more or less kept by the team about any internal squabbles, and the Kazakh-backed team went on to score first and third overall.

But if we were in any doubt about the feelings the two have for each other, we're not now: Contador used a press conference yesterday to put the knife in to the seven-time Tour winner, and Lance wasn't slow with a comeback.

"My relationship with Armstrong is nothing", he told a press conference in Madrid. "He's a great rider but I've never had much admiration for him on a personal level". Asked whether he had a message for America, Contador replied, "I have nothing to say. I congratulate him on his third place".

Tellingly, Contador also used the press conference to compare his position in the team with that of Fernando Alonso with Lewis Hamilton at McLaren, lending more weight to the rumours that Contador will ride next year for an Alonso-backed team. Wherever he rides, says Contador, "the team that I go to will have to be 100% behind me"

Contador also confirmed that the atmosphere in the hotel was very difficult, and criticised Johan Bruyneel for favouring Armstrong, although he said that he "understood" their relationship.

The 2009 winner also responded to Greg Lemond's assertion that he should prove he's capable of the power levels he showed in the tour without doping, saying that he didn't afford Lemond's comments "the slightest importance".

Armstrong had until now been complimentary about Contador's win. "I think this year's performance would have beaten my performances in 2001, 2004 and 2005," he said at a recent press meet. "Contador is that good, so I don't see how I would have been higher than that, even in the other years."

Never one to shy away from conflict however, Armstrong has been quick to respond via twitter. "Seeing these comments from AC. If I were him I'd drop this drivel and start thanking his team. w/o them, he doesn't win", he countered, and we've no doubt that we'll hear more – much more – in the near future. Axel Merckx has chipped in on Twitter to side with Lance: "A champion is also measured on how much he respect his teammates and opponents. You can win a race on your own not a grand tour", he opines.