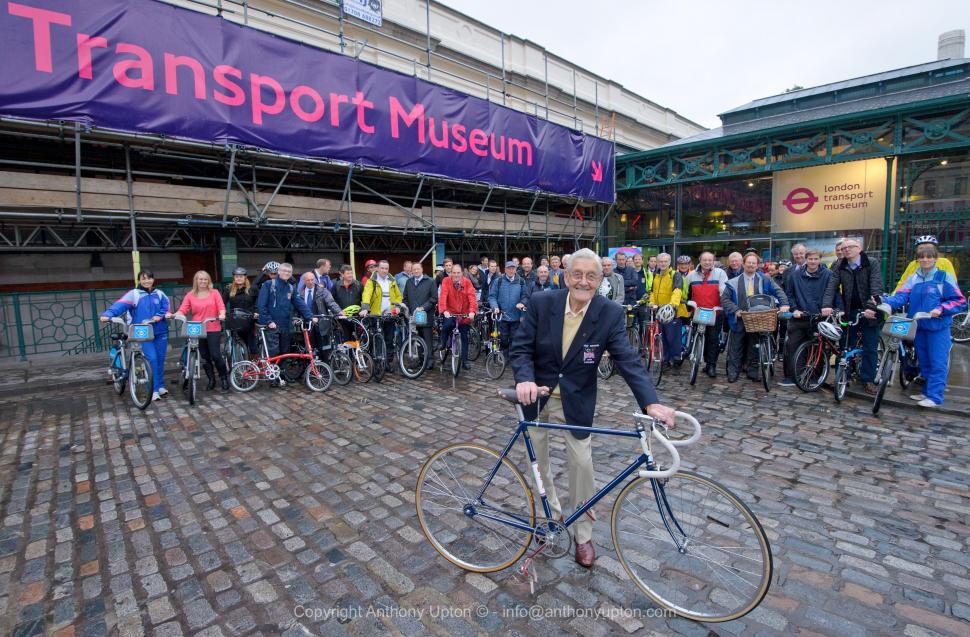 Tommy Godwin, winner of two bronze medals at the 1948 Olympics and subsequently GB team manager and president of the British Cycling Federation, joined Members of Parliament and others participating in yesterday’s All Party Parliamentary Cycling Group (APPCG) annual ride to launch Samsung Bike Week, which begins on Saturday and runs from 16-24 June.

The 92-year-old, who won his medals in the team pursuit and the Kilo time trial, was among those who pedalled three miles from the London Transport Museum in Covent Garden to the House of Lords.

Besides its backing of Samsung Bike Week, the Korean consumer electronics business is also one of the sponsors of the Olympic Torch Relay, and as reported here on road.cc recently, has launched the Samsung Hope Relay app through which it will donate £1 to charity for each cyclist who rides a mile during Bike Week and logs it through the app.

A link to download the app can be found on the Samsung Bike Week website, which also has details of a whole host of events taking place around the country.

Philip Darnton, executive director of the Bicycle Association and the man who heads up Bike Week said: “Samsung Bike Week is a unique cycling event because it is as much for total novices as passionate cyclists.

“What’s more with the added incentive of being able to raise money for charity by taking part with the Samsung Hope Relay, we hope even more families and people who have never cycled before, as well as those who need an incentive to cycle to work, and of course seasoned cyclists, will get on their bikes this summer.”

Andy Griffiths, Managing Director of Samsung UK & Ireland added: “Samsung is delighted to sponsor Bike Week to encourage everyone to take part in cycling during the summer and we are looking forward to bringing cycling to the whole of the UK through the regional events which we are supporting.

“The chance to raise money for charity is an added incentive for cyclists and with the Samsung Hope Relay people can contribute to a charity by simply downloading an app, and then cycling a mile or more. We hope this will encourage even more cyclists to take part.”

One of the charities benefiting from the initiative is Kids Company, whose founder Camilla Batmangelidjh commented: “Downloading the Samsung Hope Relay app and taking part in Samsung Bike Week are two great reasons to start cycling and give something back in the process.

“Simply cycle one - or as many miles as you like - during Samsung Bike Week and every mile you cover will fund a meal at one of our centres where we support some of the most vulnerable children and young people.”

A cyclist more than seven decades younger than Godwin who has gold medal ambitions at London 2012, double track world champion Laura Trott, is the ambassador for Samsung Bike Week, who said: “Samsung Bike Week will be a great reason for people to get cycling and get fit during the summer.

“I’ve been training hard ahead of the London 2012 Olympic Games, but everyone can get involved in cycling regardless of ability and Samsung Hope Relay brings with it the opportunity to raise money for some incredible charities.”