Flying Scotsman gives the lowdown on the bike he'll use for his tilt at the human-powered land speed record ...
by Mat Brett

Here’s a treat for you: a video of the great Graeme Obree explaining the design and building of the bike that he’ll be using for his attempt at the human-powered land speed record in September.

We’ve featured one video from the Humans Invent website before, where The Flying Scotsman explains the motivation for his attempt. This time around, he talks in more depth about how he arrived at his idea of riding head first, and the actual development of the bike. 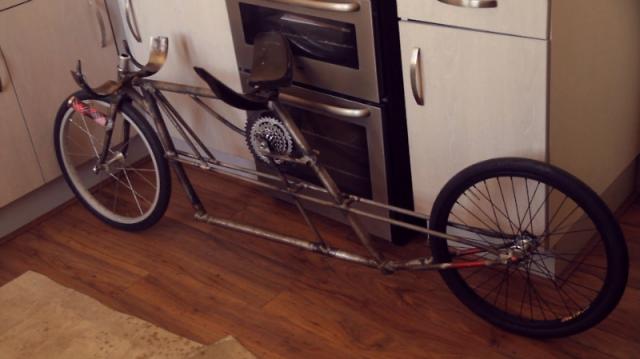 The mainstream media’s perception the former world hour record holder and 4000m pursuit world champion, now 46, is that he’s an eccentric inventor who knocks up stuff from spare parts in his kitchen… and that’s about right. He comes across as someone with a hell of a passion for both the engineering and the riding.

Obree talks about the advantage of being both the engineer and the rider for his record attempt, in that he can adapt the design immediately to suit his requirements rather than having to go through a time-consuming back and forth to get it right.

He also explains how he’s ended up using that old saucepan – the best known part of his record attempt story – to produce the shoulder supports for his bike.

“I thought the perfect thing would be a piece of stainless steel which will be relatively light and accessible, and it will probably end up lighter [than a component made from other materials] because if you use aluminium you’ll have to bolt that onto the steel… and if you use glass fibre then you’ve got to use an awful lot of it so as it’s not going to give way at some point. “I thought, ‘Hold on: sacrifice a saucepan.’ The whole job from that point – shaping and silver soldering – took about two hours. There was no going anywhere to search for glass fibre or getting an engineer to make that component for me. It was saucepan to shoulder support in two hours without leaving my kitchen.”

Anyway, we’re giving away the plot. Take a look for yourself.