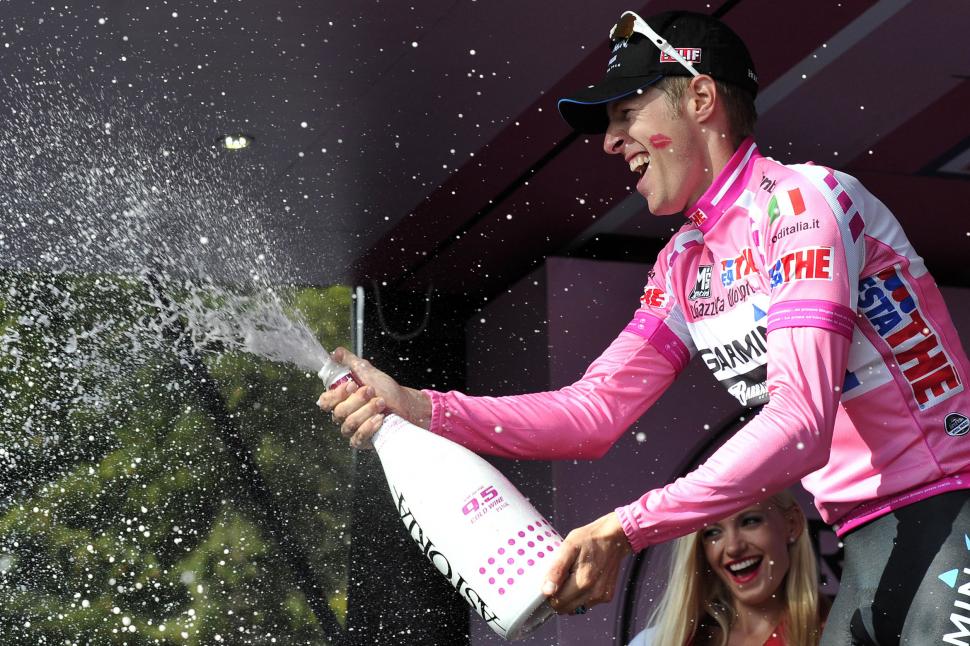 Ryder Hesjedal of Garmin-Barracuda has become the first Canadian to win one of cycling's three Grand Tours, overhauling the 31-second advantage that Katusha's Joaquin Rodriguez had held over him this morning in the closing time trial of the Giro d'Italia in Milan, though the Spaniard fought hard to try and take time back in the final kilometres.

Thomas De Gendt of Vacansoleil-DCM, who jumped from eighth to fourth on GC yesterday with that stunning solo victory on the Passo dello Stelvio, leapfrogged Lampre-ISD's Michele Scarponi to step onto the podium in third place behind Rodriguez. The stage victory itself went to Marco Pinotti of BMC Racing, with Team Sky's Geraint Thomas second.

Immediately after his overall victory had been confirmed as Rodriguez crossed the line, the 31-year-old former mountain biker Hesjedal, who in his early days on the road helped Discovery Channel team mate Paulo Savoldelli win the 2005 Giro, said: "It’s unbelievable. I knew I was good when I came to this race, I just stayed focused every day and took every opportunity. The team was behind me 100 per cent and I kept driving off that support, and especially the fans back home in Canada, it’s been unreal."

That support from his Garmin-Barracuda team was evident yesterday, when Peter Stetina and Christian Vandevelde in particular helped him limit his losses to Rodriguez on the Stelvio to just 14 seconds, and it's also the team's towering performance in the Stage 4 team time trial in Verona that helped build the platform for the ultimate victory of Hesjedal, who had two separate stints in the maglia rosa earlier in the race, losing it to the Spaniard both times.

Hesjedal held nothing back today on the 28.4 kilometre course, and several times seemed to struggle to keep his bike upright on some of the corners on what was a fairly technical route out from the Castello Sforzesco in the city centre towards the northwestern suburbs, then back into the historic heart of Milan, via the inner ring road that follows the shape of the old medieval walls to the finish in Piazza del Duomo.

He had begun the day as favourite to win the overall title, although De Gendt, perhaps represented the biggest threat to him; the Belgian, whose stage win yesterday had taken him from eighth to fourth on GC, had started the day 1 minute and 47 seconds down on him, and 2 minutes 18 seconds behid Rodriguez.

As perhaps the strongest man against the clock of the top four, the Belgian could potentially capitalise on any weakness or errors from the Garmin-Barracuda man. As it turned out, De Gendt would go just eight seconds quicker than Hesjedal, although his time was good enough to comfortably beat Scarponi for the third place on the podium.

Hesjedal went through the first checkpoint one second quicker than De Gendt, and the Belgian, who this morning admitted that his legs were still sore from yesterday’s efforts, looked like being for a podium position with both Rodriguez and Scarponi in his sights.

By the first intermediate time check, Hesjedal had taken back all but two of the 31 seconds he needed to make up on the maglia rosa, and at the second checkpoint, he was 44 seconds quicker than Rodriguez and seemed to be heading towards a comfortable victory over the Spaniard as he completed the course in a time of 34 minutes 15 seconds.

The Katusha rider, whose weakness in the time trial cost him the race lead in the closing days of the 2010 Vuelta, more or less matched Hesjedal's speed in the final ten kilometres today but it wasn't enough to prevent him losing his grip on the maglia rosa on the closing day of the race, missing out by 16 seconds, the narrowest margin in the race for more than half a century.

He does however win the points classification by a single point from Mark Cavendish, having overhauled the Team Sky man at the top of that ranking yesterday. A top 15 finish today for Cavendish would have put him back in the red jersey, but he finished 54th, a minute and 17 seconds outside the time he would have needed to set.

There was consolation for Team Sky, however, with Rigoberto Uran finishing safely to confirm his win in the young rider's classification, the first jersey the British ProTeam has won in a Grand Tour, while Matteo Rabottini of Farnese Vini was confirmed as the winner of the mountains classification.

Jesse Sergent of Garmin-Barracuda had set the early benchmark time of 33 minutes 59 seconds, which would be beaten first by Thomas, then Pinotti. The latter, five times Italian champion in this discipline and winner of the time trial in Milan that brought the 2008 Giro to a close, had begun last year's Giro in the maglia rosa after his HTC-Highroad team, including former team mate Cavendish, took the opening team time trial in Turin.

He had been one of the favourites to take the final day's time trial in Milan but crashed out of the race on Stage 19 in an incident in which he broke his hip. Instead, it was Garmin's David Millar who won the time trial on the last day of the 2011 Giro, but today Pinotti made sure there was no repeat of that British success by comfortably beating Thomas's time of 33 minutes 45 seconds, going 39 seconds quicker than the Welshman.