Sneak peek: Pinnacle Arkose - do it all road bike with cyclo-cross roots

Fresh from the photo studio and untouched by Photoshop prettification, these pics show the 2013 Pinnacle Arkose series bikes from Evans Cycles.

Completely revamped from the current Arkose range, these are machines for commuting on crap urban streets; cyclo-crossers with provision for rear rack, full-length mudguards and tyres up to two inches across. All three bikes are priced to come in under the magic cycle to work scheme £1000 limit 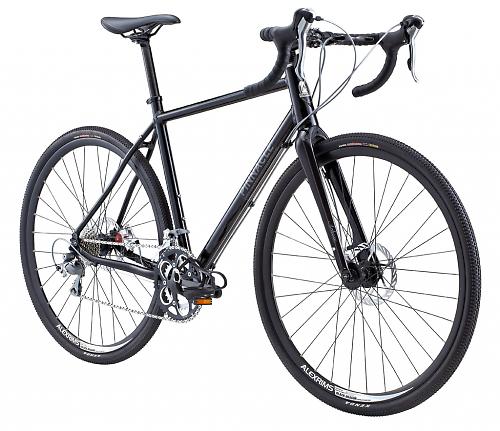 The base model Arkose 1 will have 18-speed Sora and Tektro Mini-V brakes for an RRP of £750. Next up, the £900 Arkose 2 has Shimano Tiagra components, FSA Omega Compact chainset and Avid BB5 disc brakes with Alex Black Dragon rims, while the £1000 Arkose 3 gets you Shimano 105 shifting, FSA Omega Compact chainset, Avid BB7 discs and slightly lighter, wider Alex CXD-26 rims. On paper at least the Akrose 3 looks the pick of the bunch with good wheels, those 105 shifters and Avid's BB7s the best of the current crop of mechanical discs and a class above the BB5s on the Akrose 2 - mind you, that is a nice colour and we're not saying that in a sniffy way. It's also got to be said that the Akrose 1 looks like a lot of bike for 750 notes - especially if you don't want or need disc brakes.

Designer James Olsen tells road.cc the new machines are for “anyone who wants to be unhindered by the terrain, within reason of ride position and wheel strength. Commute home via the canal towpath or a woodland shortcut in the summer, a bit of light touring, that kind of thing.” In other words, the kind of do-everything road bike that's risen in popularity over the last few years as riders attracted by the speed of skinny tyres and drop bars have realised they're just a bit scary when you're dodging the potholes of the inner city.

Evans' marketing bloke Albert Stewart agrees. “I think the cyclo-cross bike-to-commute popularity is based on a combination of different things including perceived fragility of road bikes; looks (cyclo-cross bikes are ‘cooler’ than hybrids); versatility (in terms of terrain, mudguard compatibility); and speed," he says. "I’m gobsmacked at how many cyclo-cross bikes in London I see being used as commuters with 32mm slicks fitted.”

James Olsen says what he therefore had in mind with the Arkose was, “A wider-ranging road bike, or simply a road bike that doesn’t get pinged about over potholes when you’re tired on the way to work, and stops faster in the wet – a safer ‘fast’ commuter.” 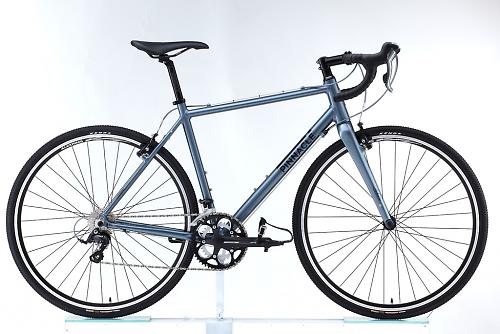 Olsen was known for steel frames in his previous life as designer of Genesis bikes. Why is the Arkose aluminium? “Pinnacle’s market position at the moment in part; also we wanted a light bike (perception of speed for effort too) and the larger tyres do take out a lot of the sting,” he says.

“I’m a steel fan as you know, but a good aluminium frame can be very close and the Arkose has slim stays, thin walls and an all-carbon fork so comfort levels are good. It’s not a race bike, but it’s closer to being raceable with an aluminium frame. We can also spec a better value for money part list on aluminium frames now.”

As he says, though, this isn't intended as a highly raceable cyclo-cross offering. “It's more street bike, less race, but there’s only downtube cable routing (that I feel works better for longer, looks clean too) between it and a disc-equipped race bike. The aluminium frame makes it a bit more of a competitive option if someone wants to give cyclo-cross a go this winter.”

The Arkose bikes are well-sorted with nice details for your street warrior requirements. For example, the all-carbon fork has forward-angled drop-outs for disc safety. “I'm a bit of a sceptic about whether discs every actually eject wheels in reality,” says Olsen, “but the forces work out and the forward slot was only a dropout adjustment job.” Plus, the front mudguard eyelet is an M5 boss on the fork so there's less faff clearing the disc.

Olsen says he's also been careful to design “better heel clearance around the rear post-mount dropout. It's our own design with a more inboard chainstay weld tab than most. Some people will ride in casual shoes and some pedal a bit heel-in. On a cross bike, the chainstays being about 425mm long and a road chainset with narrower Q factor of a highlights issues with wider disc mounts. The Arkose is about 10-20mm narrower across the heel area than some other disc-equipped road/cyclo-cross style frames.”

Finally, if you're wondering what a taper steerer is doing on a bike not intended for racing, Olsen says, “Too many cyclo-cross bikes can’t be braked that hard. Tyres are part of it but the fork stiffness and canti judders are a part of it too. I wanted a ‘no judder’ feature on these bikes, so a taper steerer and mini-v or disc option seemed a good way to go. If you’re not racing in deep mud, why use cantis? Also, the taper steerer helps the front end feel a bit stiffer if you do decide to take it down the local singletracks and tackle roots etc.”

The new Arkoses will be available from Evans Cycles stores and website from late July/early August.