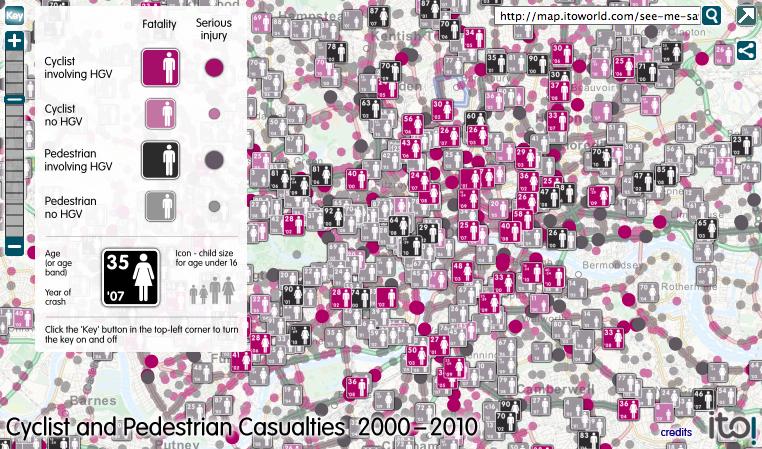 See Me Save Me, the road safety campaign founded by the family of Eilidh Cairns, the cyclist killed by a lorry as she rode to work through London’s Notting Hill three years ago, has teamed up with data mapping specialists ITO World to produce a map of cyclist and pedestrian casualties in the capital between 2000 and 2010.

Last year, ITO produced an interactive map that showed road casualty statistics across Britain during the same period. Like that map, the one produced for London is based on the Department for Transport’s Stats 19 road traffic casualty database, and shows the age and gender of the victim as well as the severity of the incident.

For the first time, the London map also distinguishes between the size of the vehicles involved, with those with a gross combination mass of over 3.5 tonnes – which includes medium and large goods vehicles – shown in darker shades than those involving smaller vehicles.

As with the previous map, the data presented should not be used to identify individuals involved in any of the incidents.

One striking feature of the map is the higher prevalence of fatalities and serious injuries among cyclists compared to pedestrians in many parts of Inner and Central London and in particular in and around the City of London and bordering boroughs such as Islington, Camden and Southwark.

When it was revealed earlier this year recently that there had not been a single cyclist fatality in Paris during 2011, the point was made by some that data from the French capital were not directly comparable to those for London, since they only covered a small, central zone; the map shows clearly, however, that it is in such a narrow-defined area that many of the cyclists who died in London over the first decade of the millennium lost their lives.

Subscribe
See Me Save Me
London
ITO World
Data visualization