The BMC Racing Team rode the brand new GF01 over the Paris-Roubaix pavé on Sunday, Alessandro Ballan piloting the bike to a podium finish. We had the chance to take the bike for a test ride in Belgium last week, taking in some cobbles along the way; here’s what we thought….

The first thing you notice is the geometry. The front end of the GF01 is a little higher than on their standard road bike. BMC have started quoting figures on stack (the vertical distance from the centre of the bottom bracket to the top of the head tube) and reach (the horizontal distance between those two points). The stack on the GF01 is 1.5 times the reach across all the sizes.

Essentially, the reach on the GF01 is a little shorter than you get on the Team Machine while the stack is a little higher. It’s hard to compare the two because the models don’t come in the same designated sizes but the reach of the 58cm GF01 is just a touch longer than that of the 55cm Team Machine. It’s certainly enough to notice. 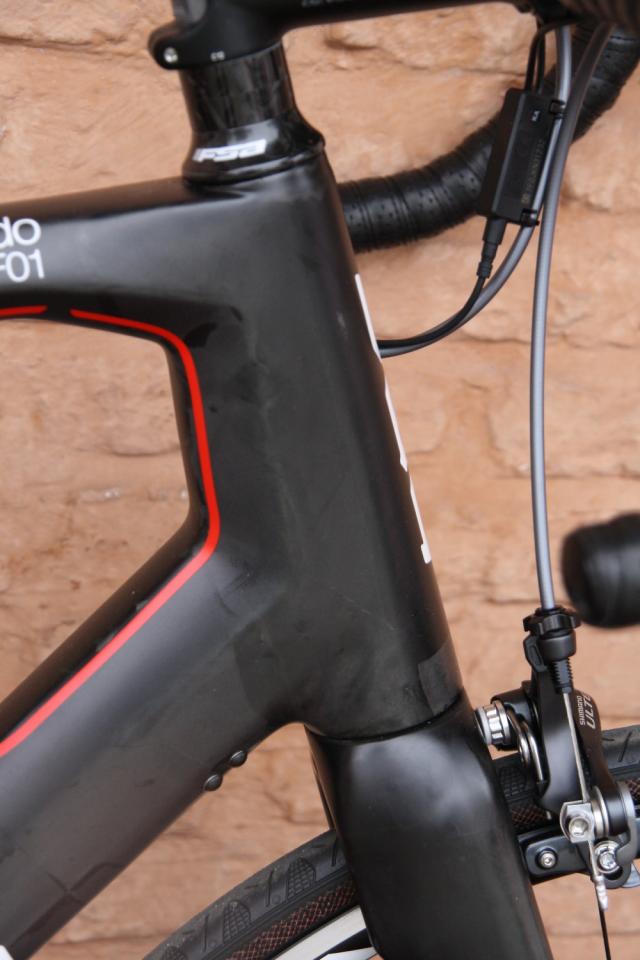 If you struggle to stay comfortable in a low and stretched road race position, maybe you should think about a geometry like this. But don’t get the impression that this is some super-relaxed setup. The front end is nothing like as high as you get with Specialized’s Roubaix, for example.

The flip side, of course, is that your upper body catches more of the wind so you’re in a marginally less aerodynamically efficient position... but, you know, there’s no such thing as a free lunch. Maybe that’s a sacrifice worth making. 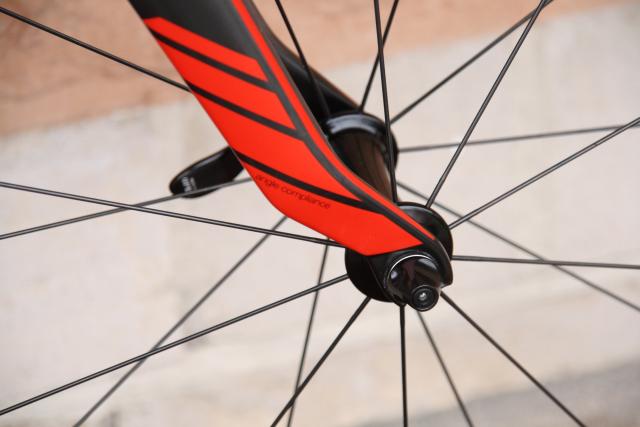 The other things you’ll notice about the geometry are that the fork rake and the seatstays are a little longer than normal, increasing the length of the wheelbase. The bottom bracket drop (the vertical distance between the centre of the BB and a line between the hubs) is slightly greater too. This all results in a slightly more stable ride; handling that’s a little less nervous and a feeling that the bike is a little more planted.

In practice, all this meant that hitting jagged cobbles at speed on my 2:30hr test ride didn’t knock the bike off line too easily. Even if you’re not hitting the pavé on a regular basis, you’re getting a bike that’s a little easier to control. The other main feature of the ride is the compliance. Now, we often joke about compliance because pretty much every manufacturer claims their bikes are laterally stiff to efficiently transfer power and vertically compliant to provide cushy comfort. We joke because they all say it seemingly regardless of a bike’s actual characteristics. But even though we take the Mick, compliance is a valuable feature – it’s a real thing that you want for improving the ride quality. The rougher the roads, the more valuable it is as an asset.

We detailed the features that BMC have included to add compliance in our previous story. Essentially, they’ve added kinks to the seatstays, chainstays and the fork legs, and designed the seat post to soak up the bumps too. The cross sectional area of the seatstays and fork legs is kept low too. The idea is that all of these elements bend slightly to soak up the hits. Compliance is hard to quantify, especially on unfamiliar roads like the Paterburg and Kwaremont. Really, you need to know how other bikes handle in the same conditions to make a meaningful comparison, which is why we’ll hopefully have a GF01 coming in for test at Road.cc very shortly. BMC do put a figure on it, though. They reckon the GF01 is 40% more compliant than the Team Machine.

This bike certainly takes the edge off rough terrain. It seemed to me that the bigger the bump, the more impressively the GF01 handled it. Of course, any bike is going to feel bumpy over the cobbles – that’s part of the fun – but the GF01 does rein that in. 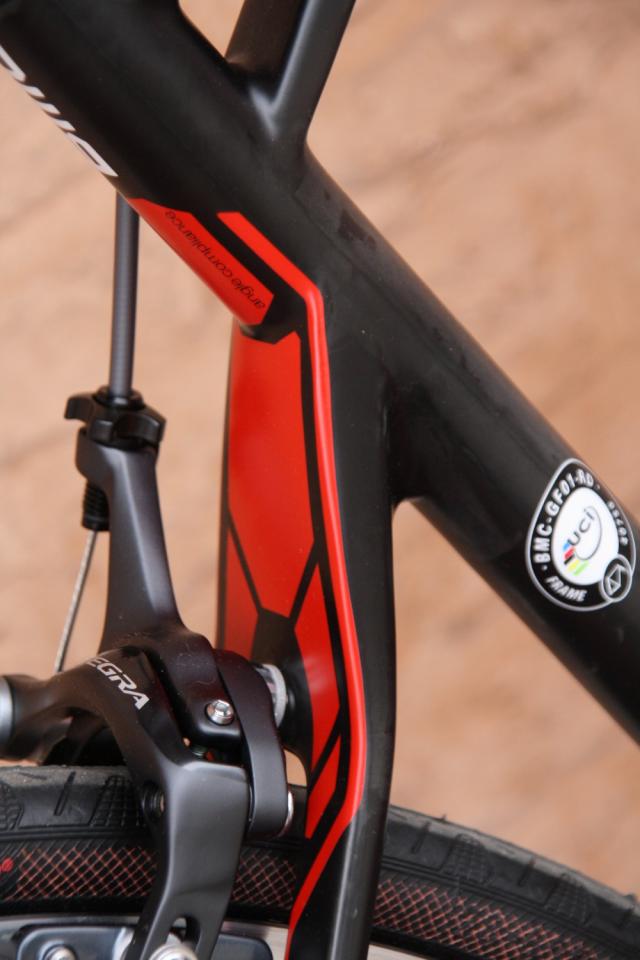 If you’re getting an image of full-suspension mountain bike suspension here, cast those thoughts from your mind – it’s absolutely nothing like that. But there is certainly a degree of damping going on – like someone put a thin layer of carpet over the cobbles to reduce the buzz and soften the sharp corners… just a touch.

One of the easiest ways to feel that compliance is to stand up on the pedals and then sit down hard. Rather than cracking your teeth together like normal, the bike absorbs the impact. It’s quite odd. The 28mm tyres are doubtless partly responsible for that feeling, but there’s a distinct cushioning provided by the frame too. The clever bit is that the GF01 feels direct when you put in the power. The head tube and the bottom bracket aren’t at all mushy or springy when you get out of the saddle and heave the bike around – they’re perfectly solid. And the GF01 climbs very well too. We didn’t do any long climbs but heading up a couple of the steep cobbled sections the bike reacted really well to increased effort. You’re looking at a frame weight of 995g (54cm model), a 380g fork, and 7.38kg (16.1lb) for a complete bike (BMC’ s figures) so there’s no reason why it shouldn’t.

The GF01 will come with those 28C tyres as standard, by the way. Big volume tyres obviously make a lot of sense on cobbles where you need plenty of cushioning and the ability to avoid pinch flats. I’m not sure I’d want to be rolling around on 28s day in, day out at home, though. That seems like overkill to me. Of course, you might feel differently and tyre size isn’t the biggest issue in the world – you can whip off the 28s and go with something narrower if you don’t get on with them. 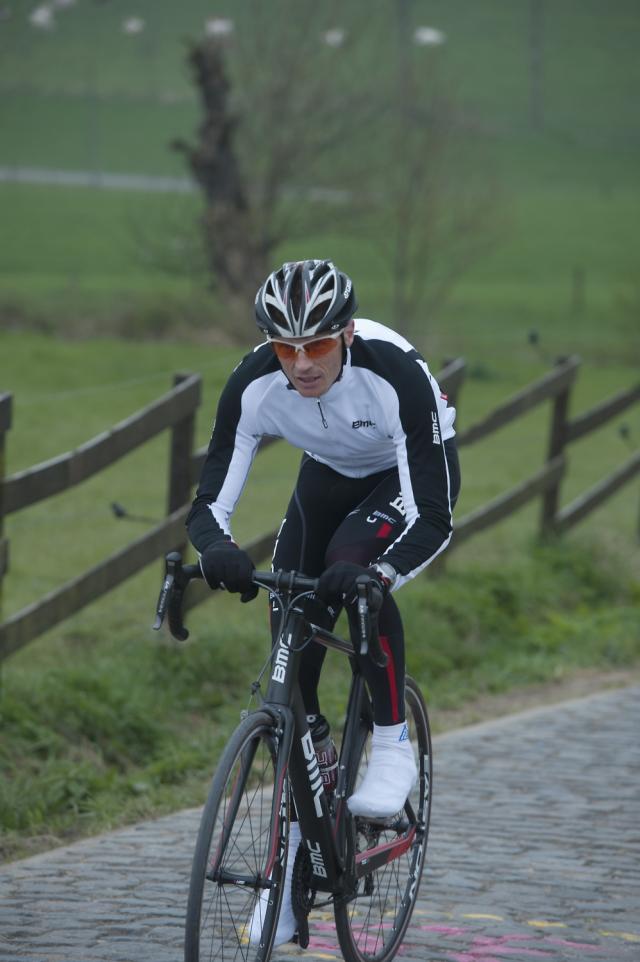 Riding the GF01 across the Belgian cobbles in all very well but it’s not particularly relevant for most of us. Britain’s roads are often pretty poor but they’re not generally as uneven as all that. Of course, BMC realise this and in the wider market place they’re aiming this bike at long-distance riders looking for comfort and beginners who want easy handling but not an aggressive position. If that describes you, this is a bike that has a lot to offer.