BMC today launched their new Gran Fondo GF01 top end road bike, a performance machine designed with long distance comfort in mind... but you probably guessed that from the name.

The GF01 comes with a frame geometry that's designed for comfort, following the shorter and taller route that many other manufacturers have gone down over the past few years. But as well as that, BMC have taken their tuned compliance concept (TCC) further than before by introducing what they're calling angle compliance technology (ACT). Essentially, they've added kinks to the chainstays, the seatstays and to the fork legs to absorb hits and vibration. They're also altered the seat post design to do a similar job.

A quick glance at the spec sheet and the GF01 certainly promises much. A 54cm bike built up with Shimano Ultegra Di2 and Easton EA90 wheels weighs in at a claimed all up weight of 7.38kg (16.2lb) with comfort most noticeably being taken care of by a taller head tube ranging in size from 125mm to 220mm and a stack height  range of 525-622mm on the six sizes available.

For comparison, BMC's out-and-out road race bike, the SLR01, has figures of 113-213mm for the head tube and 506-608 for the stack height. The other thing that immediately jumps out is that that those Easton wheels have 28mm tyres which should instantly add to the plushness. I'll find out soon enough cos we'll be riding the GF01 straight after today's launch presentation. We'll be posting our first ride review shortly. 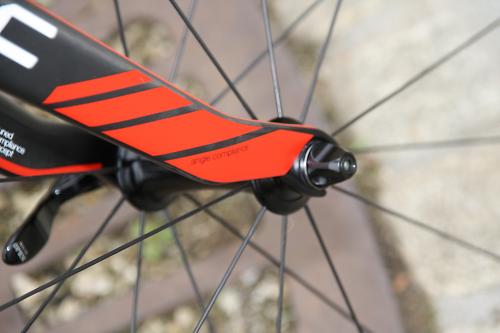 To further emphasise the GF01's performance credentials, BMC stress the amount of input they've had in its development. Indeed, the press handout says the bike was, "Designed for the big, powerful BMC team riders who race on the battering cobblestones of Paris-Roubaix".

As luck would have it, Paris-Roubaix is on this very Sunday and you can expect to see big, powerful Thor Hushovd and Allesandro Ballan doing their best to win on the GF01. Hushovd in particular is targeting this year's edition of the race. As with the Trek Domane last week, BMC are saying that their new bump muncher is both the stiffest and the most comfortable bike in their range.

History tells us - and BMC too, obviously - that bikes that do well for the pros on the pavé are also good for the rest of us when it comes to riding long distances, especially if that also involves doing so over crappy roads. So, as well as the pros, BMC are targeting this bike at:

Long distance riders looking for performance and comfort, but who aren't necessarily racing… sportive riders, then.

New riders who want to jump in with a top end performance machine but also want something that's easy to handle, stable and dependable, and who don't want a riding position that's too aggressive. New riders with a few quid to spare, obviously.

BMC also hope the bikes combination of stable handling, comfort and an upright position will appeal to women and existing BMC riders looking for an alternative choice.

So light weight, bigger tyres, and a taller head tube... but what else is on offer to make your fast ride more comfortable?

Well, in terms of geometry it's not just the head tube that's got longer, the chainstays are a centimetre longer (412mm) than on the SLR01 for a more stable, planted ride. We're guessing this will also add in a bit more back end compliance. The head tube angle has been slackened too and there's plenty of fork rake up front. BMC dub this their endurance geometry and it's a pretty standard approach on all sportive machines and on tourers. 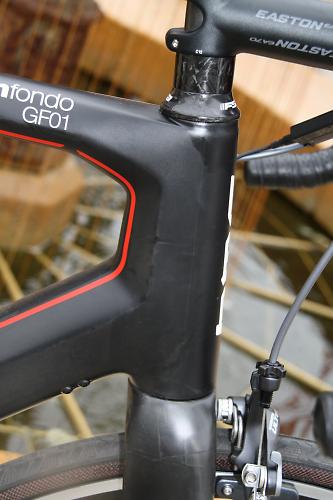 Compliance equals comfort and the GF01 should not be wanting in that department according to BMC - they've taken their tuned compliance concept (TCC) - which involves using the best combination of materials, tube shapes, and layup to maximise compliance in the required plane without sacrificing strength. It's a logical approach and one that BMC went big with on the SLR01, the bike they say sets the benchmark for vertical compliance in a race machine. 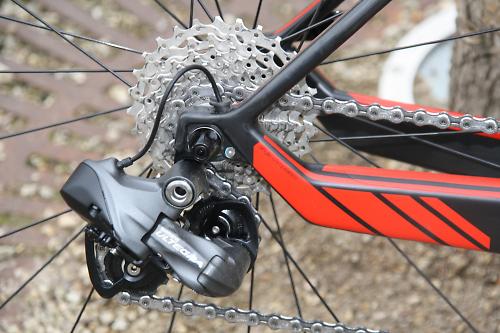 The challenge with the Gran Fondo was to increase this still further without compromising important stuff like braking and your pedalling action. To solve this problem, BMC have introduced Angle Compliance Technology (ACT). Basically ,they put a kink in the chainstay around the dropout to allow it to bend vertically while still keeping things torsionally and laterally stiff. BMC, though, have also applied angle compliance technology to the fork allowing for more "constant impact absorption', to the top of the chainstays and to the seatpost. That seatpost is long and thin (27.2mm diameter) and has a specific carbon layup to maximise compliance.

The GF01's seatpost will come with a 18mm setback as standard although 3mm and 30mm versions will be available too. The carbon layup is different in the different versions so that you get the same ride characteristics regardless of the option you fit.

So after comfort, performance and easy handling, the final part of the GF01 jigsaw is ease of use. The drivetrain is Shimano Ultegra Di2 and electronic shifting doesn't really get more hassle-free than that. Aside from the occasional recharge, it more or less takes care of itself.

The gearing set up is a 50-34 compact chainset pulling an 11-28 cassette - which should get up and over most things. The rest of the component spec majors on comfort and durability with Easton EA70 bars and stem and a plush Fizik Aliante saddle.

P*nctures are a bad thing, and to combat them while retaining performance - and doing away with the need to swap between winter and summer tyres - BMC have specced 28mm Continental Four Seasons as standard. Nice choice. One other thing that's worth mentioning is that the GF01 comes with an integrated chain catcher. We're told that results from a request made by the team. The vast majority of pro riders seem to be using chain catchers these days, especially over the cobbles where all that bouncing makes it much easier to drop the chain. Oh, and just one more point... this bike comes with DTi. Do what? DTi stands for Dual Transmission Integration and it means that you get easily removable/addable external cablestops that allow you to switch between mechanical and electronic groupsets.

That'll do for the moment. Mat is out riding the BMC GF01 over some of the cobbled sections of the Tour of Flanders so we'll have more on the bike shortly.