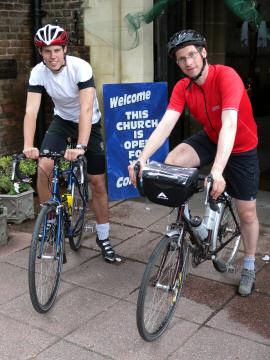 A pilgrimage of sorts has been carried out by two cycling churchman who have notched up 1,000 miles visiting 29 cathedrals.

Father Philip North and pastoral assistant Peter Garvie were aiming to raise around £30,000 to help fund a hospitality suite at their church, St Michael’s in Camden, north London.

The pair cycled 70 miles a day and took in ecclesiastical landmarks including cathedrals in York, Liverpool, Coventry, Bristol, St Albans and St Paul’s. Like proper pilgrims, they took little with them except the clothes they were wearing and a few essential suppliers in their panniers.

When they arrived back they cycled up the aisle of their own church in the middle of Sunday mass, to cheers and applause.

During their ride, the pair had plenty of time to observe Britain through the eyes of cyclists, rather than churchmen, and came up with some interesting conclusions. The most cycle-friendly city, they concluded, was London (“thanks to Ken”) and the least was Birmingham, which only just beat Manchester.

Fr North said: “We learnt something about the power of hospitality. Almost without exception the cathedrals we visited offered a really warm welcome and we found that deeply honouring not just of the challenge but of the ministry of the church in Camden.

“We were also very deeply moved by the warmth of the welcome we received from those who put us up overnight. Many of them had never met us before but they welcomed us into their homes as if we were family.”