We talk to designer James Olsen about the new range and what's coming up in 2013.....
by dave atkinson

Evans Cycles' own brand Pinnacle bikes have been around for a long time in various guises, and they've just let us know that the new 2012 range is live on their website. We've been looking forward to the 2012 range. Why? Because the new man at the helm of the design team, James Olsen, is the man behind one of our favourite bikes of the past few years.

In his time at Genesis James was instrumental in upping the profile of steel in the mainstream road bike market. The Equilibrium may look like a bunch of other bikes from where we're standing in 2012, but back at the start of 2010 it was at the crest of the steel revival wave. And they nailed it, first time: the original Reynolds-520-framed Equilibrium was an absolute gem, and the newer bikes, made from Reynolds 725, are just as good.

Now James is at Pinnacle, and the 2012 bikes are the first he's been fully involved with. "I joined Evans 12 months ago, and we've been busy revising the range," James told us. "Evans had already rebranded the bikes just before I joined, so my brief was to improve the bikes as much as we could within that style. The categories of bike we had in the range were good, but some aspects of the geometry of the bikes and the spec needed looking at."

"My idea originally was to work on a couple of categories, but when I started looking at the bikes I realised that the best thing to do would be refresh the entire range; I wanted  to make sure that a medium in one category was comparable to a medium in another, for example. I dug myself a pretty deep hole, redesigning frames and respeccing parts for over 30 models!" The Dolomite Aluminium road bikes look broadly similar to last year's bikes but there's been plenty of work put into the 2012 models. "There's more butting, so the frames are lighter," James told us. "We've tweaked the front end geometry too, and all the bikes across all the categories have a flat oval taper top tube; it's more pronounced on the MTBs and more subtle on the road bikes. We've done a lot of work with the sizing to get a better spread of reach and stack height measurements across the range of sizes. The Dolomite gets a shallow drop bar this year and mostly Shimano running gear."

This year there's four bikes in the range, with the £900 Dolomite 4 topping the range and packing Shimano 105 transmission and a Shimano RS10 wheelset. The three cheaper bikes get Tiagra, Sora and 2300 gearing and retail at £750, £600 and £500 respectively. There's a women's version too, the Gabbro, available in Tiagra and Sora builds for £750 and £600. One of the bikes James has spent most time on is the Arkose, Pinnacle's all purpose CX machine which has been one of their best sellers. "I'm trying to get away from model years with Pinnacle, but this is a sort of 2012-and-a-half bike," he said. "Pre-production samples are coming through now [an Arkose 3 sample is pictured above], we wanted to wait so that we could spec the new Shimano Sora on the low-end bike. The Arkose range is great value for money, we've got a new all-Carbon fork with a post mount for discs, and we've worked really hard to price the bikes as aggressively as we can". Certainly they look good value on paper, especially the 105-equipped Arkose 3, which also gets Avid's excellent BB7 disc brakes and still manages to sneak under the cycle-to-work limit of £1,000. The Arkose 2 gives you Tiagra and Avid BB5s for £850, and the entry-level Arkose 1 (new Sora and Mini-V brakes) is £750. All the bikes have full rack and mudguard compatibility for the bike-to-work sector.

The Evaporite carbon road bike is unchanged this year, although James hinted that there was interesting stuff in the pipeline for 2013. "We're very much in the middle ground with Carbon," he said. "In terms of volume it's hard for us to commit a big budget to R&D for our own frame, but we're big enough that it's also difficult to compete with open-mould frames from smaller companies that have much lower overheads. We're keen to have something unique, and it's been quite an experience for me trying to develop that with our volume of sales, and mould costs being what they are. We're confident we can make it work though, and I'm hoping to have samples by this time next year." 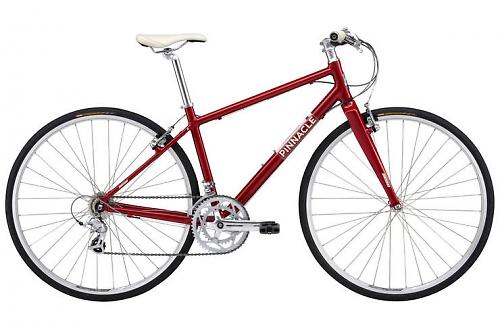 On the flat bar front there's three ranges designed for the road. The Lithium probably best described as an urban 29er. There's five bikes in the range, from the £300 Lithium 1 with V-brakes and a low-end Shimano transmission up to the £600 Lithium 5, sporting Shimano hydraulic discs and an Acera/Alivio 27-speed drivetrain. The Neon is a fast commute hybrid with road gearing and lighter wheels; it tops out at £550 for the Neon 3 with Sora gearing hanging from an Aluminium frame and fork. Finally there's the Cobalt range with lockable suspension forks and four models ranging from £350 to £600. All three bikes are available with women-specific geometry too.

And steel? "It's a regularly asked question," says James, "no doubt because of where I've come from. Much as I'd love to do a steel Pinnacle it'd be very much a step in a new direction for the brand, and the name on the down tube means a lot in the steel market. I'm keen to get Pinnacle on a roll and build the credibility of the brand before we try to go off in another direction."