If you’ve not heard much about Velocite before, that’s because the brand has been around only since 2008 and it has just got UK distribution. The Geos is the first level carbon bike in the lineup, designed to be a lightweight, stiff and fast race bike, but also comfortable enough to ride on a long sportive or a multi-day event... which, admittedly, is the same as many other manufacturers promise. 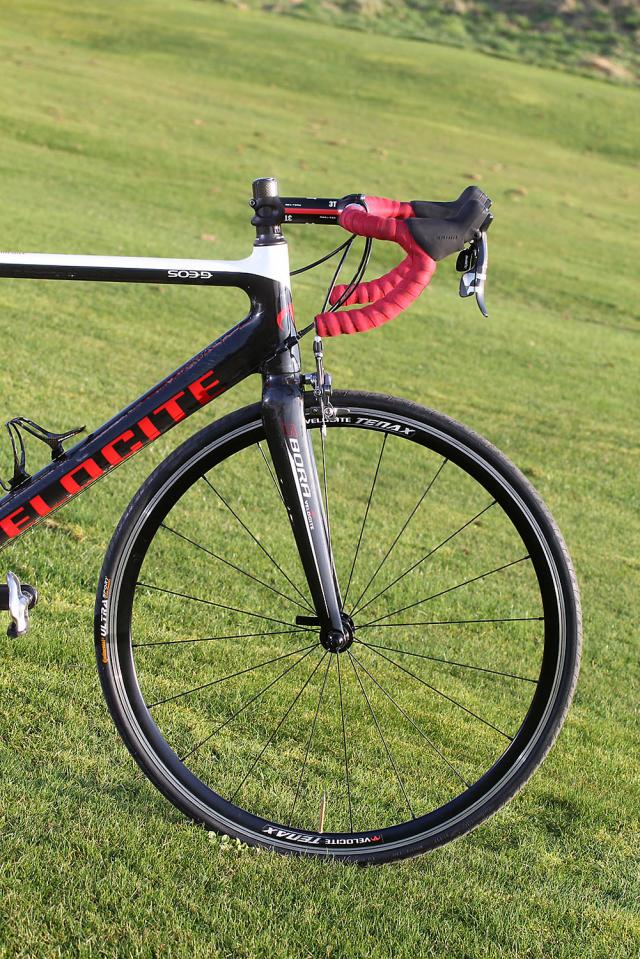 But we’re getting ahead of ourselves. Back to the frame… The Geos is a unidirectional carbon-fibre monocoque that boasts many of the features we’ve come to associate with high-end performance bikes over the past few years. 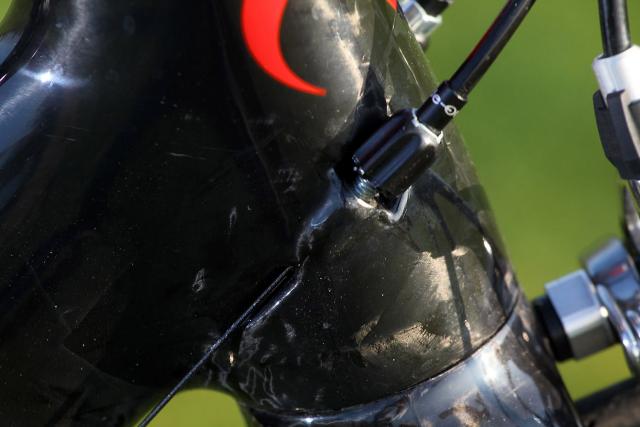 So, you get a tapered head tube with a 1 1/8in upper bearing at the top flaring out to 1 1/2in at the bottom to increase strength and torsional stiffness, and the bottom bracket is of the oversized BB30 variety – again to increase stiffness and also to drop the weight. 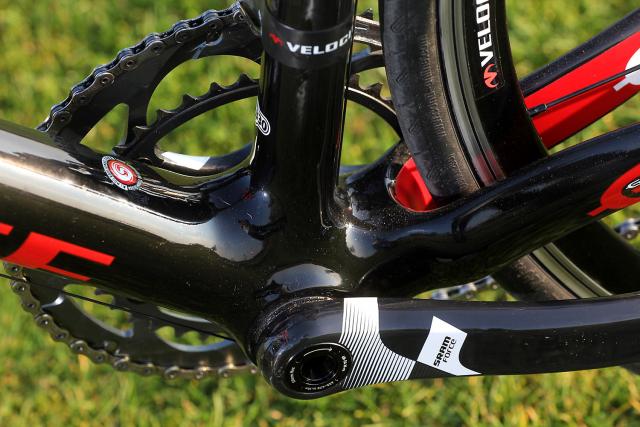 The down tube is designed to be stiff too – are you starting to notice a theme here? It’s up to 60mm in diameter while the chainstays are 45mm tall as they leave the bottom bracket shell. 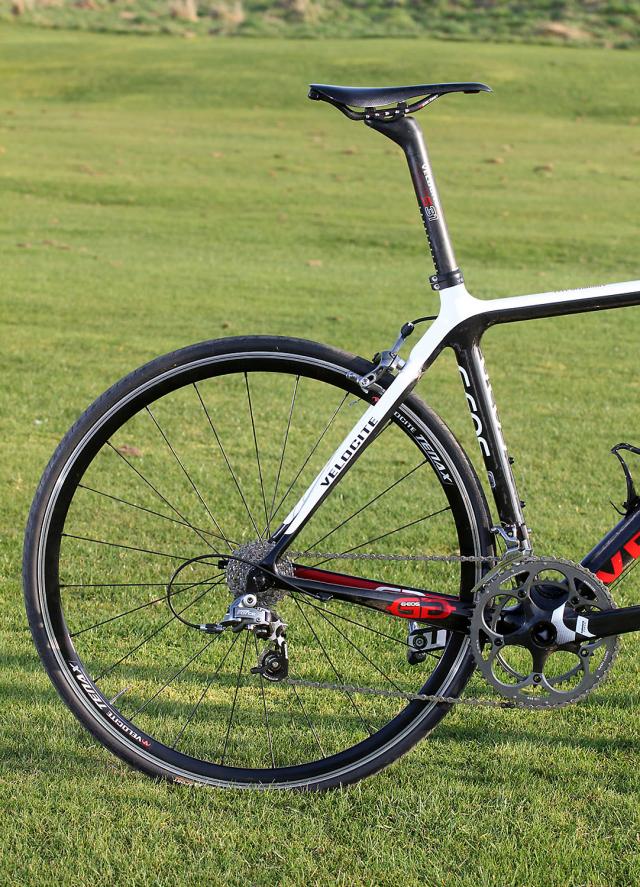 Velocite use a compact geometry with a sloping top tube so the front triangle is pretty small for the bike size and the same goes for the back end. The aim of the small triangles is, again, to provide more stiffness.

Speaking of the geometry, the Geos comes in four different sizes from small to extra large. We have the medium model here. Despite a 547mm top tube, the sloping geometry means that the seat tube is just 480mm, so if the reach is right for you, chances are that you’ll have a lot of seat post exposed. The idea is that you’ll get enough flex there to keep the ride comfy. That’s a concept that Giant and other adopters of compact geometry have been pushing for years. The dropouts are carbon as are the headset races, which drops the weight just a smidge. The cable stops are integrated into the head tube while the rear brake cable is routed inside the top tube. 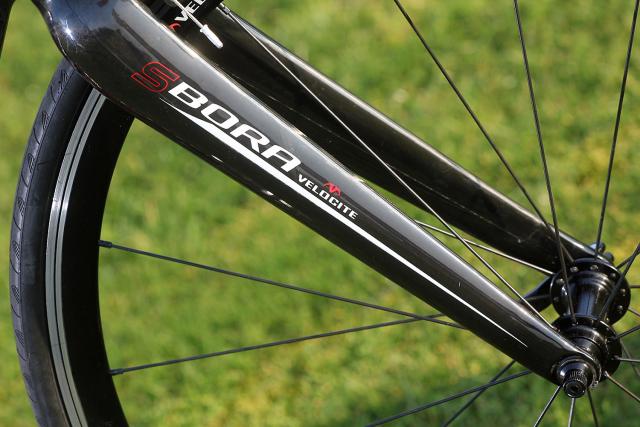 The fork plugged in up front is Velocite’s own Bora S which they use across most of the road range. It’s a full high-modulus carbon monocoque right down to the dropouts and Velocite claim a light 360g weight. 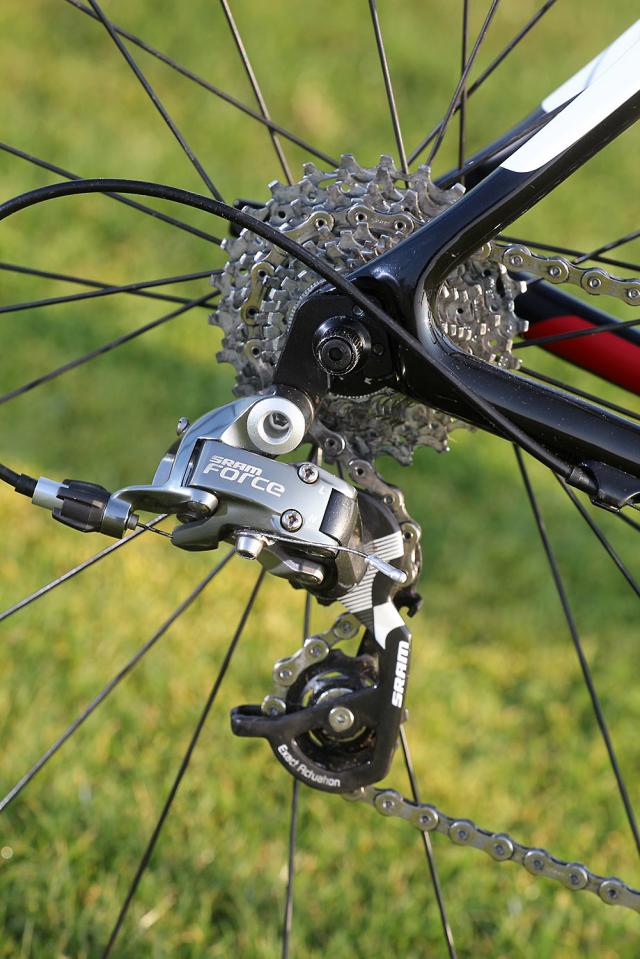 The 2.0 comes with a SRAM Force spec – Force being the second tier groupset after Red – although, as we said, you can opt for a slightly cheaper Ultegra build if you prefer. 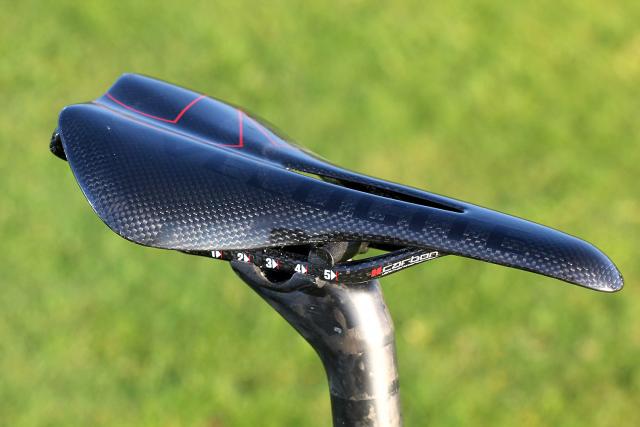 You’d usually get a Prologo saddle on this bike but our review model has Velocite’s own SCS model instead. SCS stands for Soft Carbon Shell. As you can see, there’s no padding here, it’s just a shell that’s designed to flex a little to provide comfort. The carbon rails are mounted on a leaf spring at the back end and there’s a cutout in the middle. Velocite’s claimed weight for the saddle is just 113g and bought separately it would cost you £130. The Geos rolls on Velocite’s own Tenax alloy wheels which have an official weight of 1,698g. If you prefer, you can upgrade to Fulcrum wheels; speccing a pair of Racing 3s will cost you £169 extra. Or you could go for Velocite’s deep section carbon wheels if you like, but that’ll put a big chunk on the price.

So, there you go… this is the first Velocite that we’ve ever had in for testing on Road.cc so we’re pretty eager to find out how it rides. Even now it’s heading off to VecchioJo’s place so standby for a review shortly. In the meantime, check out the full range at www.velocite-bikes.co.uk.