We've been itching to get hold of this tourer with disc brakes since it was first launched in America...
by nick_rearden

Raleigh have gone upmarket in the do-everything tourer market with their Sojourn, just arrived at road.cc towers. Its £1,100 price pitches it among some hot competition but it has disc brakes, surely a precursor of things to come as utilitarian tourists tend to care more about how things perform and for how long, rather than how they look and how much they weigh which is taxing the sensibilities of the lightweight crowd as you read this.

The Sojourn has been in the range of the United States arm of Raleigh's worldwide empire for a number of years but never in the brand's spiritual home country, which is odd as we like to think of ourselves as a nation of tourer buyers. Certainly a quick glance at any railway bike park will reveal a good number of Raleigh Royals and Dawes Galaxys perhaps not bought for their globetrotting credentials but blooming' useful nevertheless with practical tyres, gears for all eventualities on weekend runs and luggage racks for the trip to Tescos on the way home from the station.

Well, the Raleigh Royal at £500 and indeed the Dawes Horizon at a wee bit more are still very much alive and kicking in the ongoing ranges but if you want something a bit snazzier in case you really are heading off up the Karakoram Pass, the Raleigh Sojourn looks like it should be fit for the job. The good news is that it's already been doing battle in the US where the similarly-priced Surly Long Haul Trucker and plenty more besides make that market a competitive crucible for genuine continental tourers. The big story on this Sojourn is disc brakes for the first time here: Avid BB5s which won't surprise anyone that rides a mountain bike but likely to raise a few eyebrows in the traditional touring world.

So, what have we got in this here Sojourn? Well, apart from the disc brakes that are a bit new in the context, a whole lot of traditional thinking and all painted in understated plain black gloss. The size 55cm - with a 54cm top tube - that the average-height UK man will ride has a 73° seat angle and a 71° head allied to a 50mm fork rake. That as well as a long but not overly long 1046mm/41" wheelbase should mean a high degree of stability especially if your front rack is loaded and bumping across loose shale. The geometry varies as well across the sizes which are nominally 50, 53, 55 and 57cm so that, for example, the 57 has a shallower 72° seat angle on the assumption that your taller rider has longer thighs.

Of course, the frame is made from classic steel tubing. Let's see whose? Ah yes, Reynolds. Of course. It's their '631' blend, the latest version of the classic '531' which they've tweaked over the years so that it can be hand-brazed by elven artisans in converted railway arches in Lancashire as well as laser guided robot welders in Taipei. The upshot though is that the stuff is super-strong but malleable enough to be drawn into the nice thin-walled shapes frame designers like for stiffness and strength here - points at the chain stays and forks - and just a bit of 'give' there - the forks again - which is why they have that special oval cross section. 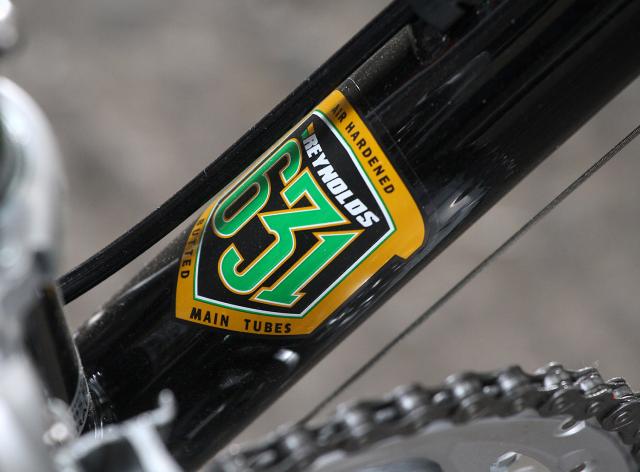 It would be funny old traditional tourer that didn't have Reynolds steel tubing of some kind. This is the middle-ranking 631 flavour that's light and strong without being too exotic and pricey and it can be repaired my a man with an anvil in Botswana.

Anyway, let's tick a few boxes that the potential expedition tourist will be looking for; Brooks B17 saddle - in black obviously - check, Vittoria Randonneur 700C x 35c tyres, yup. Nice wide Shimano gears based on a Sora triple chainset with 50/39/30-tooth chairings and 9-speed 11-34 at the rear, yes. And a sturdy rear luggage rack and the braze-ons on the fork for a front one as well if you want to add it. Got them, too.

Less common or expected are steel mudguards which although painted beautifully to match the overall scheme look to our eyes like they might be a bit vulnerable on a bike that could get bashed about. Let's see what Mr Simmonds our reviewer says about that one. Most likely he'll notice and appreciate the kink in the stainless steel rear mudguard stays where they avoid the chainstay-mounted disc brake calliper. Did I mention the disc brakes? Ah, yes - that's what everyone including us is dying to read about; the disc brakes. A nice pair of Avid BB5 cable-actuated callipers as fitted to a million mountain bikes, matched up with the 160mm centre-lock rotors on middle-ranking Shimano hubs.

We have a number of nice tourers lined up for review over the next few months; the aforementioned Surly Long Haul Trucker which they're offering with or without discs, the Super Galaxy where Dawes are going with the new Shimano CX50 cantilevers and a Ridgeback that their man still thinks is right for sticking with cantis. It will be interesting to see what Rob Simmonds makes of the Great 2012 Disc v Cantilever Debate as it applies to classic expedition tourers. 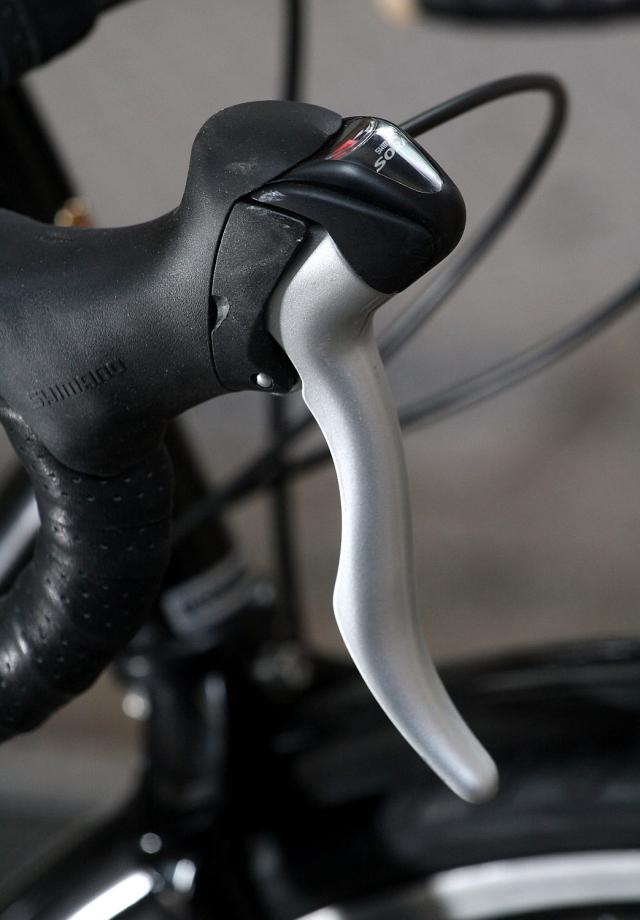 Just so you know your British Raleigh folk are thinking of you, the UK-bound versions of the Sojourn come with Shimano's Sora STI levers instead of 'bar end controls the USA gets.