The sportive ventures out into the cloud: we head to Rutland to try out the come-any-time Giant 365
by dave atkinson

The Giant store on the shores of Rutland Water is the start and finish point for a new Sportive, the Giant 365. There's two main routes - a 96-mile long loop and a 62-mile shorter version - taking in the lumpy and scenic terrain between Melton Mowbray to the north and the Vale of Belvoir to the south. But there's no need to put a date in your diary; this is a timed challenge that you can do whenever it suits you. The Giant 365 is so named because it's available to ride 365 days a year. You get a timing chip from the Giant store, swipe a terminal on the exterior of the shop then take your map and work your way round the route. There's two intermediate timing points on the shorter route (with an extra one on on the long loop), and you swipe yourself back in at the end, whereupon you can get an instant confirmation of your time and see yourself added to the roll of honour. All the timing stations are externally mounted, so assuming that you've picked up your timing chip in advance you can do the ride whenever you like, even when the Giant store is closed. 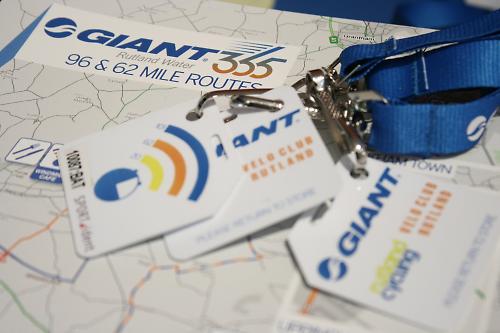 The hardware supporting the Giant 365 is tried-and-tested stuff from timing specialists SPORTident. They've been developing their system for years, and you may have used it at events in the past, and not just cycling ones; the system of dibbers and timing points was originally developed for orienteering. Unlike the more usual timing mat systems, which bleep you out as you cross the start line and back in as you finish, the SPORTident system relies on you swiping your timing card on a timing station, which writes the information to the chip. The chip can store a number of times and they get downloaded at the finish line, where you can get a printed receipt showing the breakdown of your ride; often the numbers get uploaded to a results website too as is the case on the Giant sportives.

Obviously this means that you can't have a hundred riders rolling out at the same time and the start gate registering them all instantaneously. But it's a simple system that works extremely well, and it's used on open-start sportives such as the Fred Whitton Challenge with upwards of 1,200 participants. It also lends itself to being used on static events, and that's what's happening at Rutland Water. The Fred Whitton was the first ride in the UK to use the SPORTident system to log riders at any time of day or night as the FWC four seasons, and the Giant 365 is following on the back of a very successful launch up in the lakes. 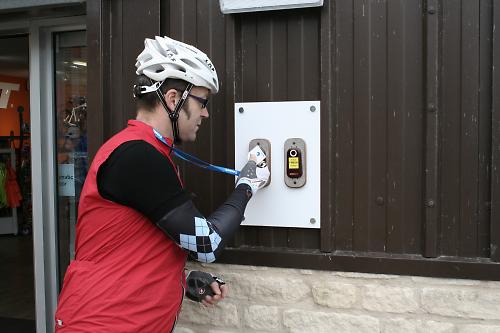 The routes themselves have been set with the help of Ian Penrose from Velo Club Rutland, who's responsible for organising other sportives in the area, including the Rutland CiCLE Tour and the popular Lincoln GP sportive with its cobbled climb finish. Ian joined us on the day to show us around the route, which takes in much of the same area as the CiCLE Tour. It was also helpful to have him shouting directions; The Giant 365 routes are waymarked but obviously the fact the signage is permanent means that it has to be fairly unobtrusive, not like the huge arrows you'd expect on a mass start event. Your free map and the little orange arrows should see you round okay even if you're not familiar with the area, but it's not like the follow-the-leader feel of a big sportive: you need to know which way is up on your map.

The route heads out west from the Giant store through Wing and Preston then turns north towards Oakham, at which point the flat terrain gets decidedly more lumpy. This is one of the final stretches of the CiCLE classic, Ian tells us, the elite day race that's run partly on the unsurfaced gated roads and farm tracks around the area. After ninety miles of hard racing the short, sharp climbs and descents must really hurt the legs; after a half marathon the day before I was doubting my ability to cover 100km on this terrain! Thankfully after that the profile flattens and it's swoopy and fast as far as Wymondham and the Windmill Cafe, where the first intermediate timing station is located. Reserves of cake are located there too, thankfully. The timing stations allow you to swipe yourself in, have a bit of a sit down and a cup of tea and then swipe yourself out when you leave, so you can see your time with and without stops. After the stop it's flat for a little bit longer before the needle points to lumpy again, and this time it stays there. Okay there aren't any mountain ranges in Leicestershire, but there's plenty of climbing in this route and the back leg is a real energy sapper, with the climb past Launde Abbey a particular reminder of how much the early season fitness is lacking. Ian tells us that the longer route, which dips down into the Vale of Belvoir, features some of the region's more feared climbs on top. Certainly the short ride is no picnic. Things get a bit more gentle through Hallaton and the impressively moneyed Horninghold – more a collection of mansions than a village – before a swooping, alpine-style climb up to Uppingham which will bless you with superb views back over the countryside if you can tear your sweaty gaze from the tarmac in front. There's another card swipe in the middle of Uppingham (a bit off route so happy hunting) before a couple of final climbs to Morcott and North Luffenham and a short hop back to the Giant store and a well earned sit down. With a 20-minute stop for coffee and cakes at the windmill we trundled round in 4:25, which wasn't too bad considering Ithe excesses of the day before and the fact that I was also struck down with the lurgy. Excuses, excuses...

If you want to try the Giant 365 out for yourself then the Giant store at Rutland Water is the start and finish point, and they're the ones handing out the timing chips. There's a £25 deposit for your chip of which you get £20 back when you're done, and the proceeds from the 365 will be going back into local cycling clubs. You can order the chips from the store so they're ready to pick up when you arrive, and you can post them back through the door if you finish the ride when the shop is closed; they'll download your ride times and make sure you get on the wall of fame.

Many thanks to Ian from Velo Club Rutland for being our guide for the day, and Kieran from Giant for riding with us, at least until he disappeared up the Uppingham climb... Thanks also to Dave from Giant for inviting us down and lending us a TCR Advanced 3 for the ride; we'll be testing that bike on road.cc soon so stay tuned for that.