Charge Bikes are putting the finishing touches to their 2013 range and they’ve given us a sneak peek at a few of the bikes, plus details of a new custom saddle service that they’re about to launch.

Although Charge are based local to road.cc in Frome, Somerset, we caught up with them in Taipei, Taiwan. Rather than having a stand in the Bike Show like everyone else, they’d hired the love hotel down the road. 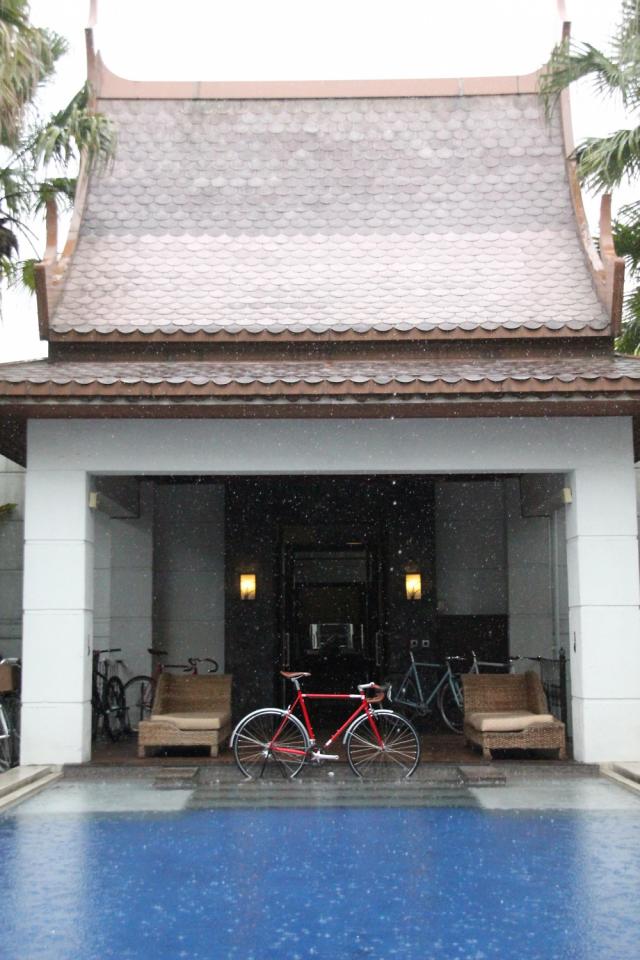 Why? I'm not sure we really did get to the bottom or that one. I mean, it was unused at the time but Charge were still asked to hire the place by the hour, which is the hallmark of a quality establishment. Honestly. 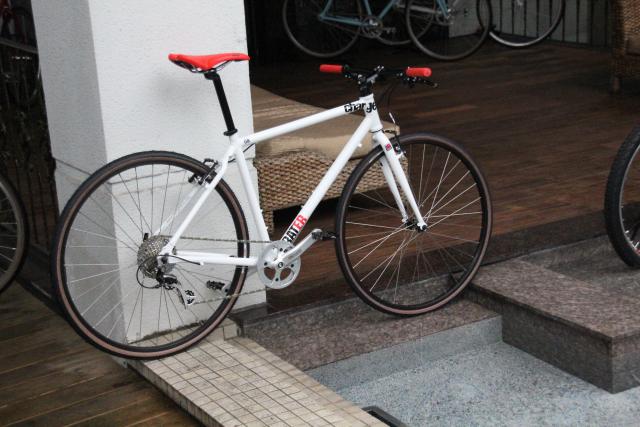 The Grater – as I’m sure you know, all Charge’s bikes are named after stuff you’ll find in the kitchen – is a brand spanking new bike for 2013 and it’s a flat-barred aluminium street machine. Essentially, it's a cheaper version of the existing Scourer and Zester bikes in the Charge range; it's likely to cost £400. The frame is 6061 aluminium and it comes with a cromo steel fork up front. You get 8-speed Shimano gearing, a Truvativ E400 chainset and 700c wheels. 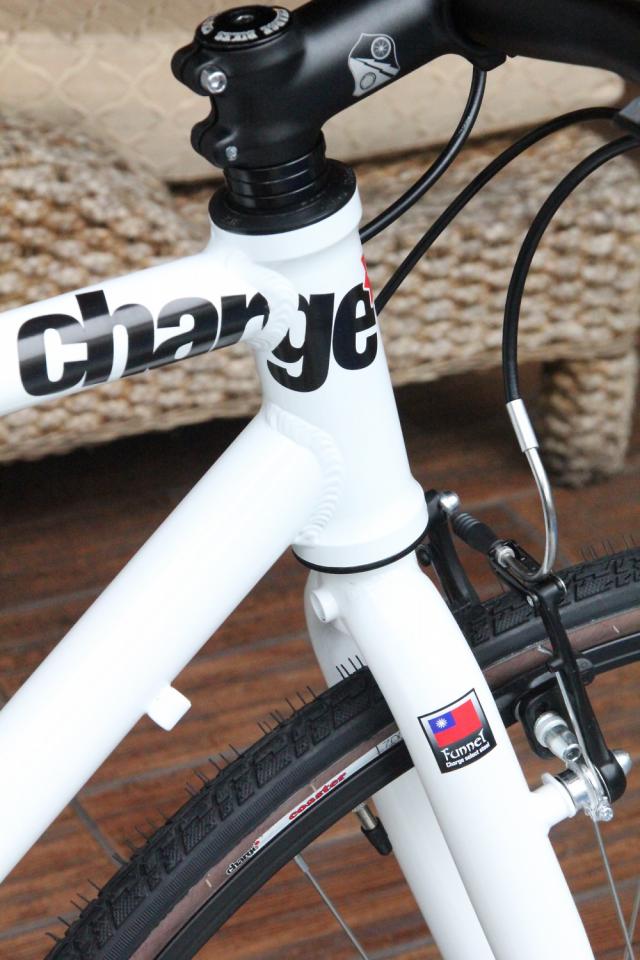 We can see this one proving popular with urban riders wanting the comfort and visibility of a fairly upright riding position, along with a bit of speed. Mudguard and rack eyelets will come in handy if you want to use it for commuting duties. 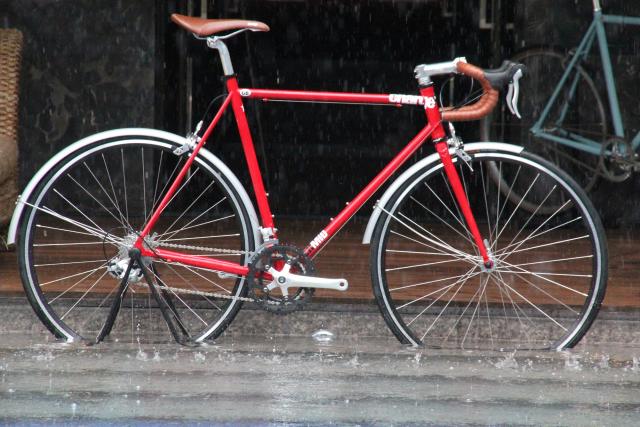 The Juicer bikes use skinny Tange Prestige cromo tubing that’s custom drawn and double-butted, and a Tange Prestige fork too. The idea is that it’s forgiving and will last for years. 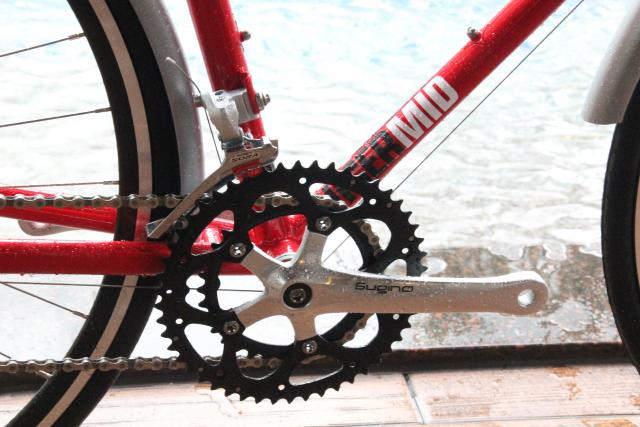 The Juicer Mid has a few component changes but it’s essentially the same bike as before, but now it comes in this red finish. 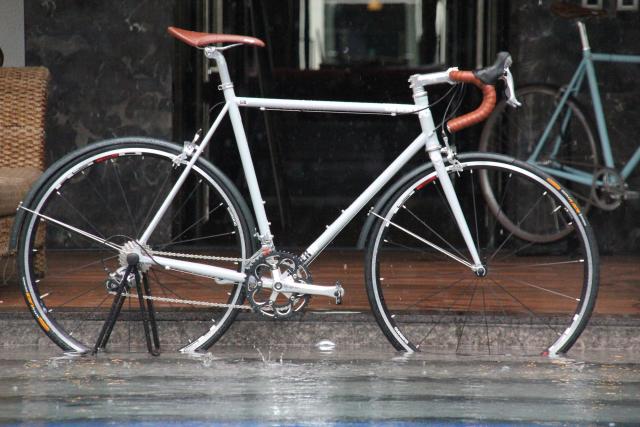 The Juicer Hi comes with Shimano 105 10-speed gearing and will come in a grey finish. Both bikes come with mudguards so they’re ready to hit the UK streets. 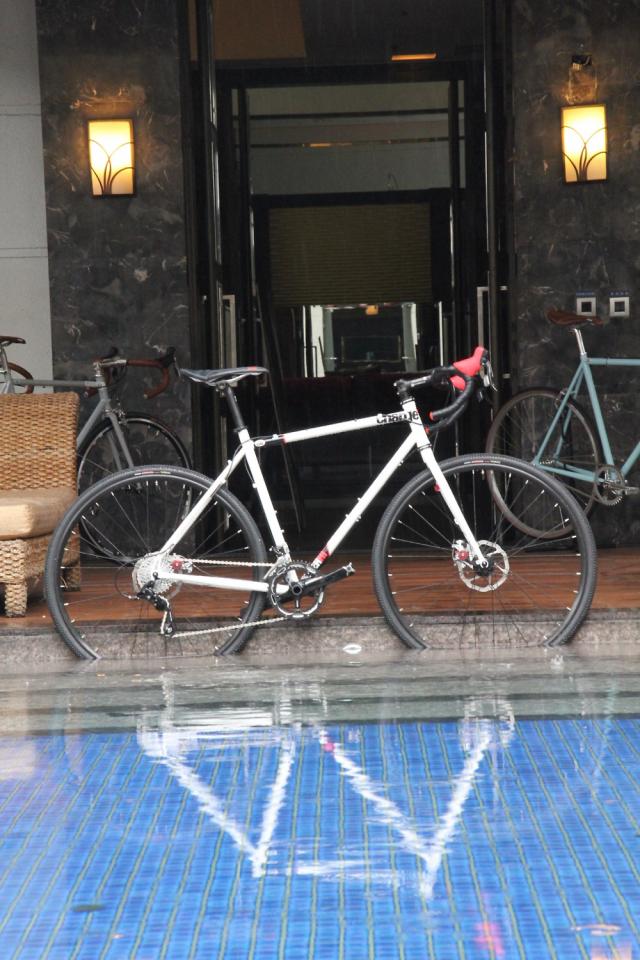 The commuter/cross Filter Hi is steel too, with a Tange Infinity frame and fork that’s double butted and custom drawn. Those are 10-speed Shimano Tiagra shifters on there and the mechanical disc brakes are from Promax. 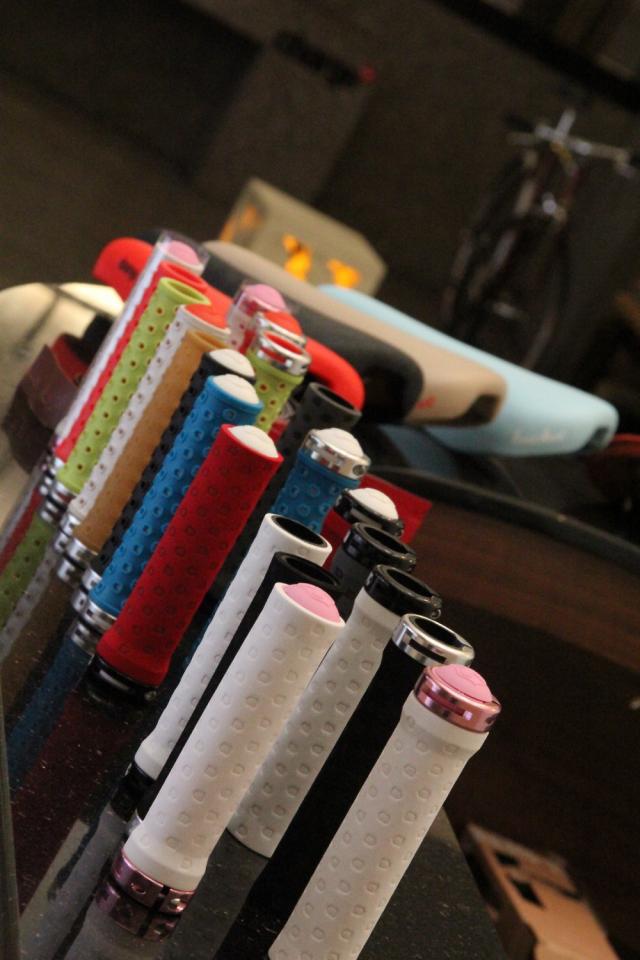 The Griddle grips will be available in more colours for 2013 and Charge will add a new foam grip, the Skillet (those white ones at this end are Skillets). It’s a lock-on design with a single clamp to hold it in place. 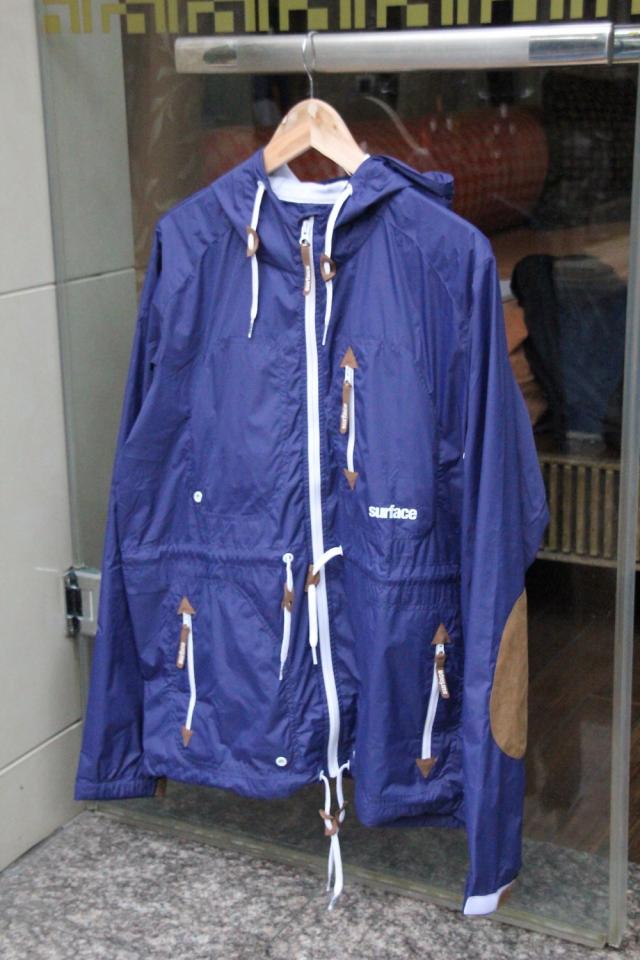 This is the new Parka Jacket in the Surface range – Surface being Charge’s clothing brand. That’s a waterproof/breathable fabric and the seams are sealed inside. It’s quite a slim cut – not racy, but it’s not going to flap about too much as you ride. 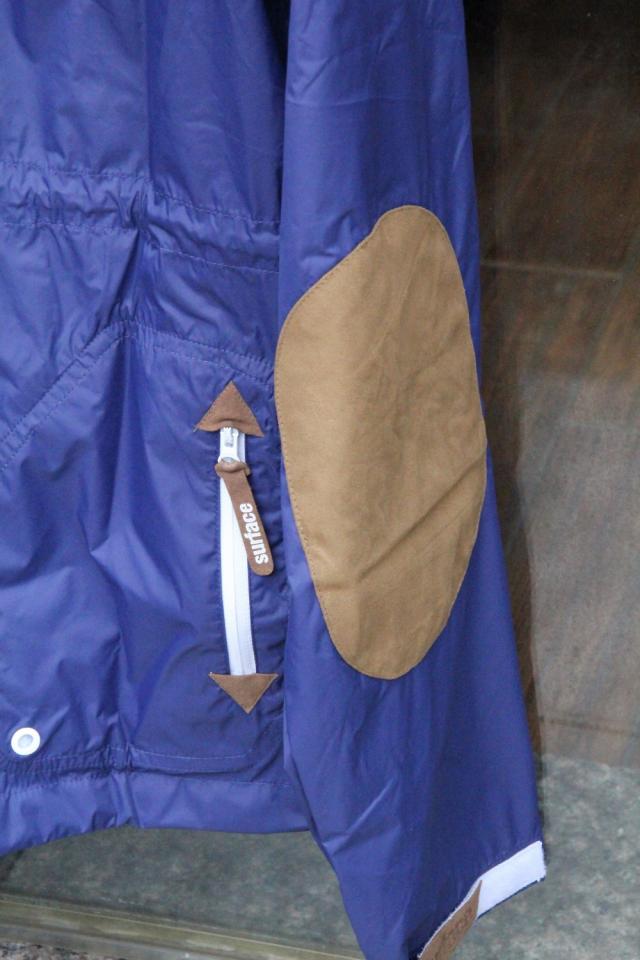 You get a whole bunch of zipped pockets, a hood and adjustment around the hem, wrists and hood. Suede is used for patches on the arms and as details elsewhere and it looks pretty cool to us. 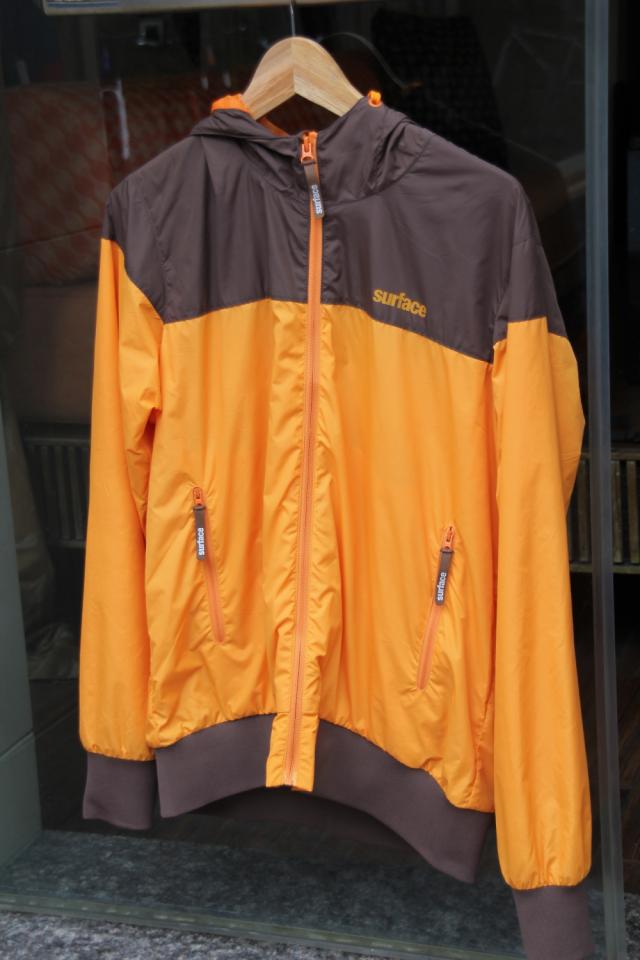 The Wind Cheater is new too. It’s made from a mid-weight polyamide fabric that’s windproof and showerproof, and there’s a full mesh lining inside to help with breathability. Rather than having an adjustable hem and cuffs, these are a stretchy rib design. Like the Parka Jacket, the Wind Cheater will be available in various colours. 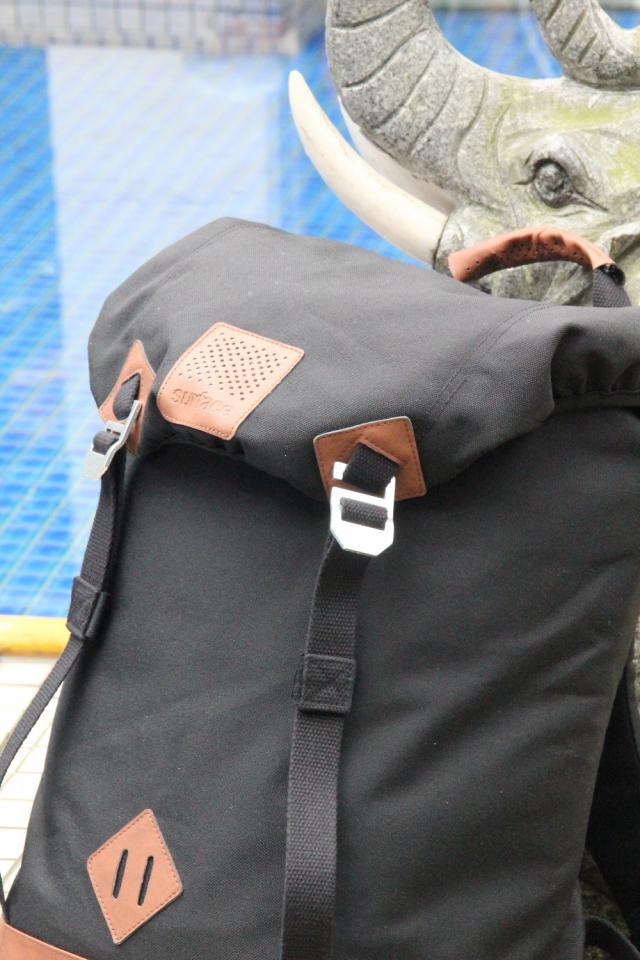 Surface will be adding a new carry pack to the lineup for 2013 too, made from heavy-duty waterproof nylon. The main compartment is a big old cavern of space – 45 litres – with a padded laptop sleeve in there. 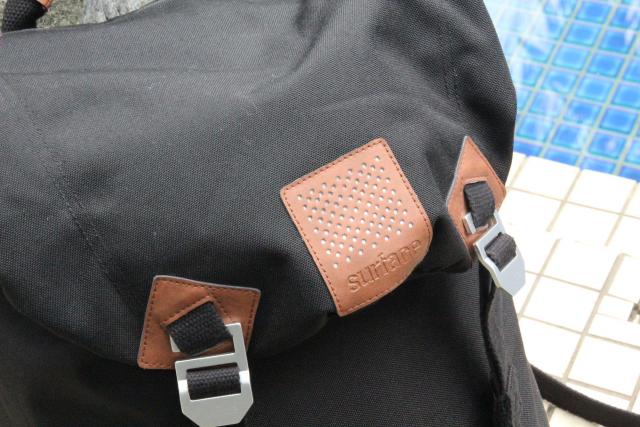 It looks really good quality with custom metal closures, sliders and belt loops, deep-padded straps and a zipped pocket in the top. There’s reflective material behind that patch on the top flap which shines through the perforations when light catches it, and you can fit a blinky LED on the back. It's likely to cost £69.99. The Surface products are likely to go online some time in April.

One other interesting new development from Charge is that they’re about to launch a custom saddle builder service that’s pretty darn neat if you ask us. 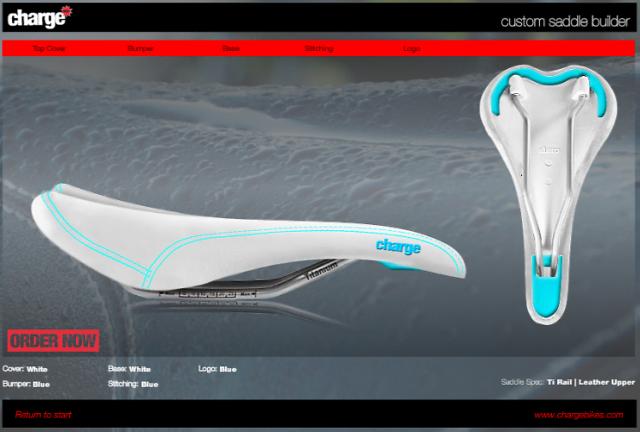 It’s an online thing that you’ll access through the Charge website. First, you select the saddle spec: you choose between titanium and cromo rails and between leather and synthetic upper.

Then you choose the colour of everything: the top cover, the base, the bumpers (the bits at the front and back on the underside), the stitching and the logos. There are loads of different options to choose from. In fact, there are a total of (gets out calculator)… over 100,000 different combinations.

Saddles will range from £59.99 to £99.99 and delivery time will be 90 days. The service isn’t quite up and running yet but it should be ready to rock in the next few weeks. These are a few screen grabs from the site which isn’t quite ready for operation yet. 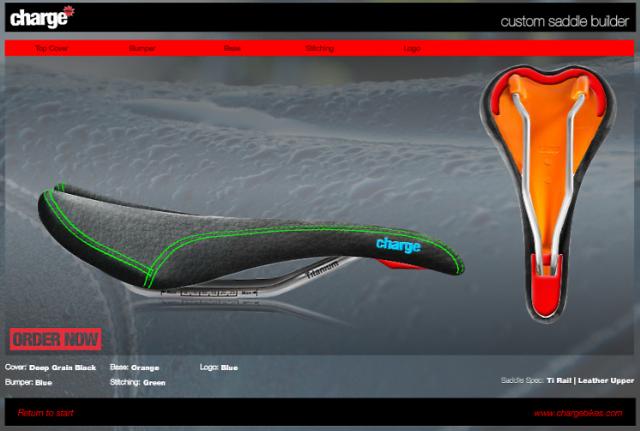 You could go tasteful, or you could go all Timmy Mallett. Keep your eyes on Chargebikes.com for this over the next few weeks.