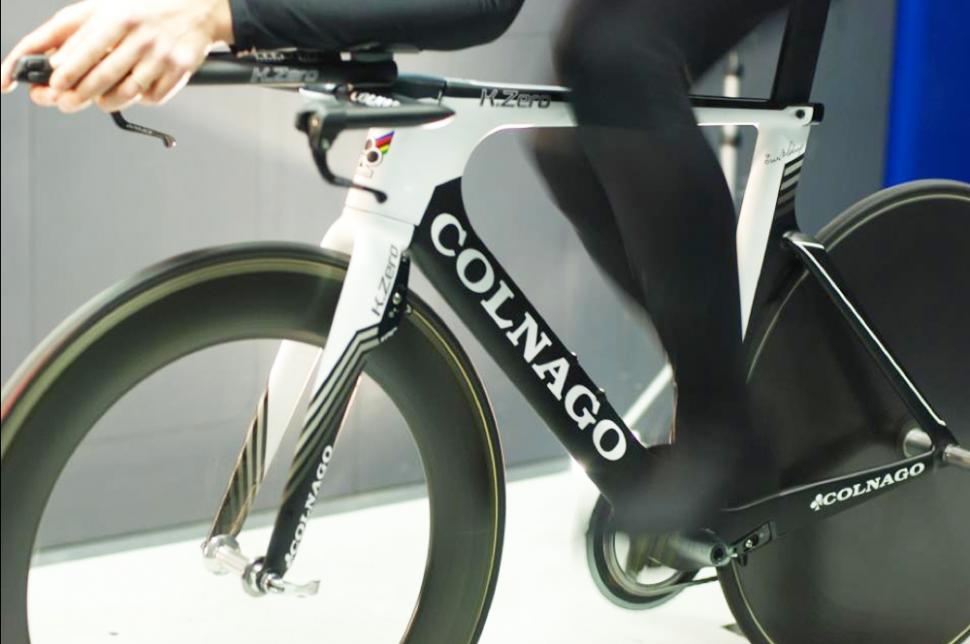 Italian frame brand Colnago has released pictures and a video of the new K.Zero that will replace the current Flight dual-purpose time-trial and triathlon frame for the 2013 model year.

'2013' of course means that we will be seeing this new carbon frame used by Colnago-sponsored team Europcar this season although our racing department will have a better idea of whether that's likely to mean appearances at the Giro d'Italia and Tour de France what with both Colnago-CSF and last year's TDF folk hero Thomas Voeckler's squad enjoying mere Pro Continental status and therefore only getting a possible wild card entry.

Update: our racing correspondent Simon MacMichael confirms that Colnago-CSF are riding the Giro in May and Europcar should be at the Tour in July, so expect K.Zero in action at both for the time trial stages.

Anyway, what looks different bearing in mind at this stage Colnago are just teasing us on their Facebook page, saying that more details will be on their main website in the next few days?

Not too much, in truth, from the looks of it other than the usual 'incremental gains' malarky. The cables disappear very quickly into the fuselage which is always popular on an aerodynamic frame but the main bit of tidying up is that the brake callipers are now concealed within the fork-crown and to the rear of the bottom bracket in properly modern style. The top of the fork where it intersects with the stem is also fully faired into the headtube in the style of numerous Shiv imitators although unlike Specialized's much persecuted-by-the-race-commissaires time trial model, it's unlikely to be coming in both UCI-legal and devil-may-care triathletes' versions.

We'll look forward to seeing whether braking is expedited by some cunning CNC alloy machining along the lines of TRP's brakes for the explicit purpose and already much used in this role or something as radical as Ridley's Noah Fast idea where extra elements of the carbon-fibre frame itself are pressed into service as brake arms. We'll see but cheeky peeks suggest it's the former.

Price? We may as well indulge in some speculation: the Flight was launched in 2009 at £2,500 and then dropped to £2,000 for 2010 so we're going with £2,500 for the frame and fork kit when it becomes available, probably in mid-summer. The current Flight comes in nominal seat tube sizes 45, 53 and 58cm and we suspect that will remain; it's probably more useful to look at the top-tube lengths which are 505, 540 and 560mm. You also get two carbon seat posts; an inline one for time-triallists and a forward-position version which replicates a 77〫seat angle for triathletes, and we don't imagine that will change either. Is this Alessandro Colnago or Pierre Rolland modelling? The interwebs are agog. Colnago 2012 K.Zero: side profile not too different to Flight but concealed brakes and cables. The stem is inset, too.