Look's Kéo Power pedal is now available to buy in the UK as is their new cyclocross bike, and that seems like a good enough reason to take a good look at them.

Fisher Outdoor Leisure, one of Britain's biggest bike and components distributors, are currently running an expo for dealers and journalists, giving us the chance to take a look at many of the new products that have recently become available or are just around the corner.

First up, the Look Kéo Power pedal... How does it work? There are eight stress gauges in the axle of each pedal that measure the deflection of the axle. That deflection indicates how much force you are putting in – the more deflection, the greater the force. It’s a simple enough concept even if the actual measurement is a tricky process. Look reckon they have it nailed, though, claiming the force measurement is accurate to within 2%.

The system also measures your cadence (crank revolutions per minute) to give a power reading that you display on a Polar computer mounted to your bars. It’s compatible with CS600X and CS500 computers.

Fitment is really simple. You just fix the pedals to your bike and then add a little transmitter to the end of the pedal axle on the inside of the crank arm. Each transmitter slots in place and is then held there with a good old zip tie. It seems perfectly secure. As well as your power and cadence, the system tells you how much of your power is coming from each leg. One of the key benefits of the Look system is that it’s so easily transferable between bikes. How long does it take to move a pair of pedals and a wireless computer? A few minutes. 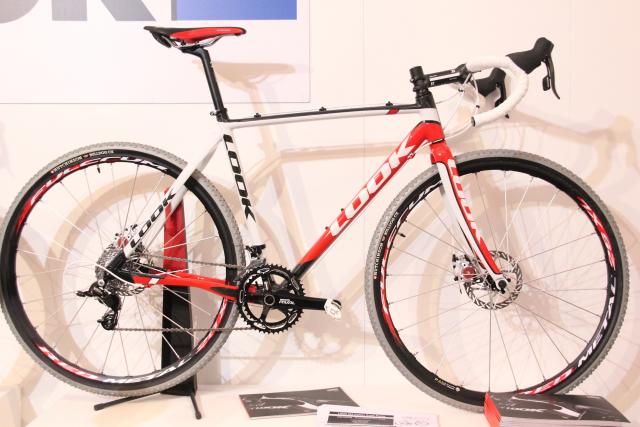 We showed you Look’s X85 before when we covered the Cycle Show at Birmingham NEC last September. Maybe we showed you it at Eurobike too… it’s all a bit hazy now. Either way, the X85 is available to buy…

This is clearly a high-end machine designed for racing rather than for urban adventures. This isn’t a bike that comes with eyelets for fitting a rack; it’s not that sort of thing at all.

The frame is made from high modulus carbon fibre and Look reckon it weighs in at just 1,150g. As you can see, the chainstays are flattened slightly in the middle which Look call their DCSC design – Dual Comfort and Stiffness Concept. The idea is to dampen out vibration while improving the transfer of pedalling energy – or, to put it another way, to make the back end laterally stiff and vertically compliant. The seatpost is a skinny 27.2mm in diameter to allow a little flex and soften the ride too.

As you can see, the X85 Is disc-brake compatible with the rear brake cable running along the upper edge of the top tube so it doesn’t get in the way when you shoulder the bike. That top tube is flattened to make carrying it more comfortable. 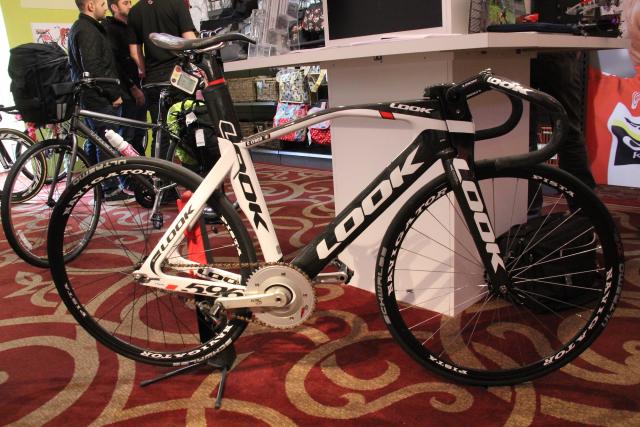 This track version of the Look 596 is the one that Colin Lynch of Ireland rode in the kilo (1km time trial) at the recent Paracycling Track World Championships in Los Angeles.

The 596 is another beautiful-looking piece of work, made from VHM (Very High Modulus) carbon fibre – even the dropouts are carbon. The aero fork hides the leading edge of the frame while that unusual stem comes with indexed carbon arms. That’s the head unit for the SRM Power Meter chainset tucked away underneath the saddle, by the way. There’s no need to see it in a four-lap event but it’ll record the data for use later on. The Tacx Genius Multiplayer is now available in the UK too, taking over at the top of the Tacx virtual reality trainer line-up.

We’ve covered it before so won’t go into too much depth here, but the Genius is completely wireless - it uses ANT+ technology to link the resistance unit and your PC (it’s not officially Mac compatible although we’ve heard tell that it can be done). The BlackTrack base incorporates a steering pad so when you turn the bars, you move yourself on the screen. It’s pretty darn clever. You can’t really see in the pics but that base folds up into four bits so it’s really easy to store in a corner. Of course, technology like this doesn’t come cheap. The Genius Multiplayer – the all singing, all dancing version including software and the ability to race other people on the internet – costs £1,349.99. 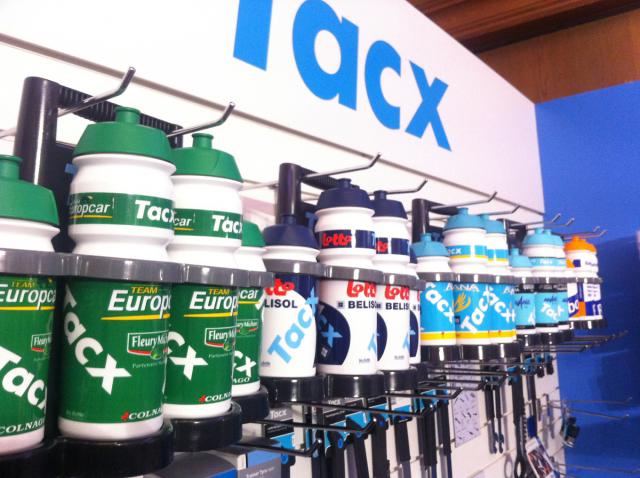 Tacx’s other big area of expertise is water bottles. That’s an odd combination - indoor trainers and water bottles. Anyway, Tacx, supply screw top bottles to some of the big teams and they’ll do the same for your club or team if you like. The 750ml team replica bottles are £6.99 a go. Tacx have just brought out the Starlite Bottle Crate that’ll take eight bottles. You can push that central handle down into the body of the crate to stack them on top of one another. Those are £19.99. Fishers’s own in-house Vavert range provides many everyday essentials. This Gel Sports saddle, for example, comes in at £27.99... 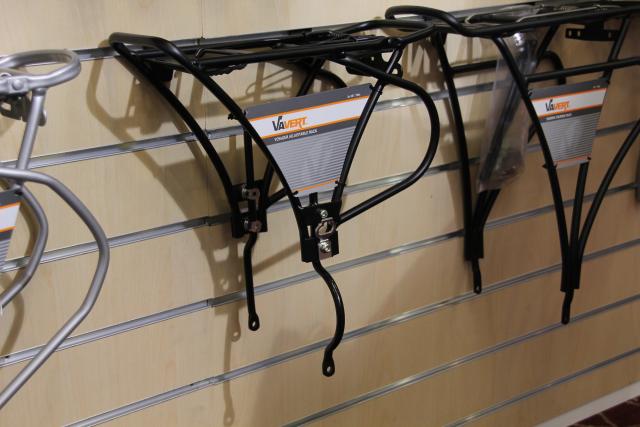 Vavert are also doing a range of bike racks. This one, for example, is the Voyager adjustabe rack with a disc brake fitting. That’s £29.99. The rabbit is part of the sleeping support that you can get for £24.99 extra. She’s called Miffy and she’s Dutch. That’s all I know.

For more info go to www.fisheroutdoor.co.uk.