We trawl the show for new bits and bobs, and there's loads... here's the first batch...
by dave atkinson

Ever wished you could put a suspension seatpost on your road bike without looking like a complete idiot? Well, now you can thanks to Canyon. We've not seen many things at the show that have really impressed us in terms of innovation, but the Canyon VCLS flat spring seatpost is brilliantly simple and we really, really want one. 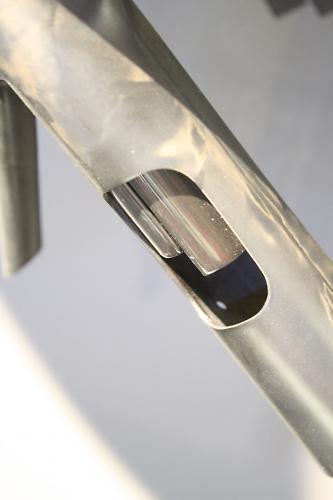 Basically the post is split into two hollow semi-cylinders that fit into your frame, and these flatten to form leaf springs at the top of the post. The saddle is clamped to both halves but the two mounting points are pivots which are free to rotate. This means that when you hit a big bump with the rear wheel, the seat can move backwards in a parallel motion, giving you 20mm of travel. The post weighs just 190g and Canyon told us that it's not significantly more expensive to produce than a standard Carbon seatpost.

They were a bit cagey about when you'd be able to buy one (next year probably) and how much it would cost ("more than £100 and less than £200") but it's already on our wishlist. 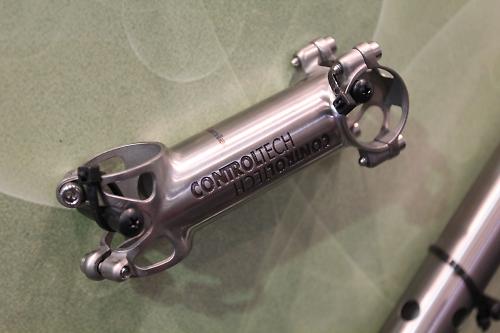 We originally went on to the Control Tech stand to look at the wheels, but the most interesting new thing they had to show us was this stem, which is a single piece 6/4 Titanium unit. We're not quite sure how they make it due to the limitations of our Italian, but it's forged rather than welded. The stem uses a diagonal closure on the steerer to spread the clamping load and both the steerer and handlebar clamps feature cutouts to save weight. The stem's available in 90-120mm lengths with a 5° rise/drop. 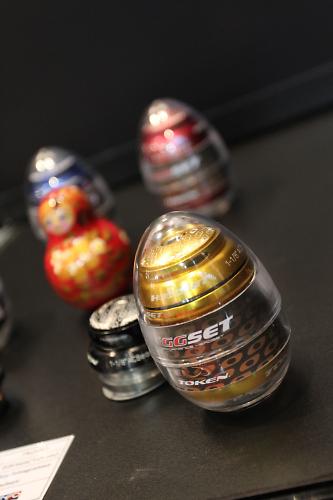 Token have been busy this year, and there was plenty of new stuff on their stand. The Heggset headset replaces their Chris-King-alike unit and comes in a natty egg, which is one reason to buy it... another would be that thanks to the design you can use it either on a standard or an integrated head tube, depending on which parts you fit. 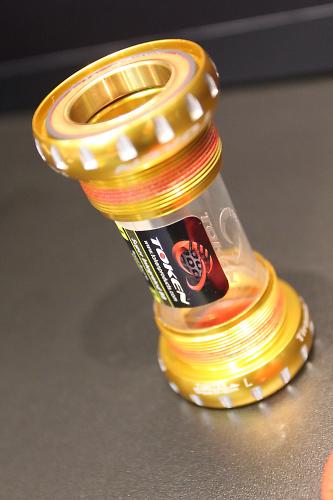 Token also had their lightest ever bottom bracket, at 75g. It uses Token's Tiramic bearing system (ceramic balls and Titanium-coated bearing surfaces) but replaces the outer race with ceramic too to shed a bit more weight. Another innovation is the Y-cut skewer. Token mill their Titanium spindle into a Y-section to save weight, and according to them it's still as strong as a regular steel spindle. The skewer set weighs in at just 45g, and Token can go even lighter: their lightest skewer set is just 37g. 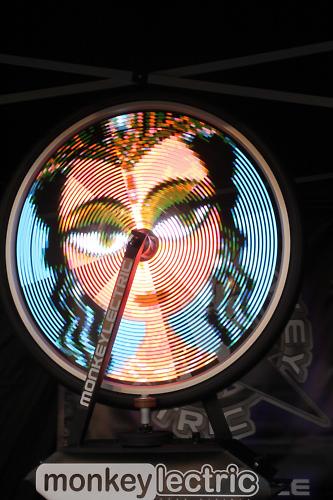 We've seen lights that run on bike wheels and make patterns before. But this full colour system from Monkeylectric takes that to a whole new level, with full-wheel, full-colour graphics that can be animated. Sadly you can't buy it as a punter (it's for ad agencies only), it costs two grand and weighs about 650g. But Monkeylectric's smaller consumer units looked pretty good too, priced from about $50-70. 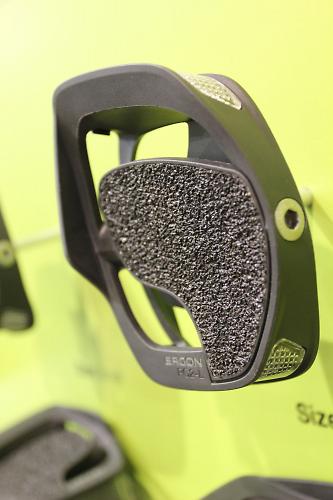 Ergon had some nice bits and bobs, including this Contour PC2 flat pedal, which features an angled footbed "for better joint alignment" and a raised inner stop so you can be sure you've got our foot in the right place. You also get a 3M safety grip coating on the platform. 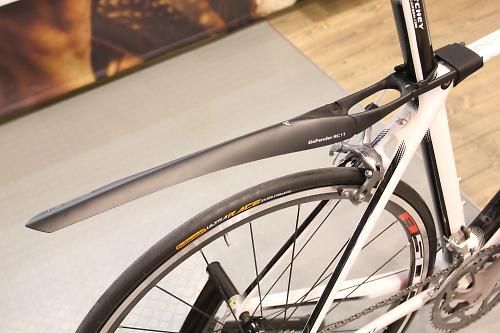 Topeak have done some work with their clip-on road guards: the Defender RC11 rear guard mounts around the seatpost and clips on to the top tube. It's a pretty simple setup and should fit the majority of road bikes, even those with deep section areo seatposts. Not that you're likely to be taking that bike out in the rain, eh. The front guard attaches to to the fork blades and the brake bolt, but you only need to fit the mount to the brake bolt once and then it's just a case of slipping the guard on and off when you need it. 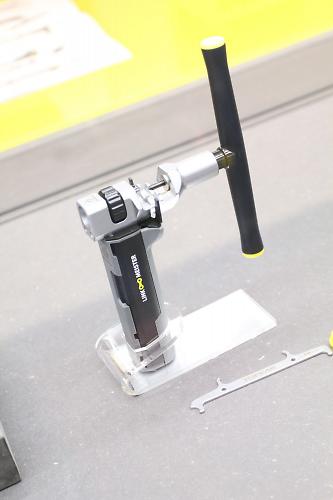 Topeak also had their Linkmeister chain tool on display, which is the most serious-looking chain tool we've seen in a while... €99 is the european asking price. Powermax are a new company producing power-measuring cranksets. The system is ANT+ compatible, completely waterproof (they had one submerged in a tank for good measure) and features a replaceable battery. The Powermax crankset can also measure cadence thanks to the inclusion of accelerometers in the sensor array. It's available on a range of different cranksets, and you can have one on a Rotor 3D crank (without chainrings) for less than €1,000 which is pretty good value. There's no distributor in the UK right now but you can buy direct from Germany.

O-synce were making big play of their power pedal at last year's Eurobike; this year it wasn't even mentioned on the stand. So, have they binned it? No. "The next time you see it, it will be finished" was their slightly esoteric reply. It looks like that might be some time next year. 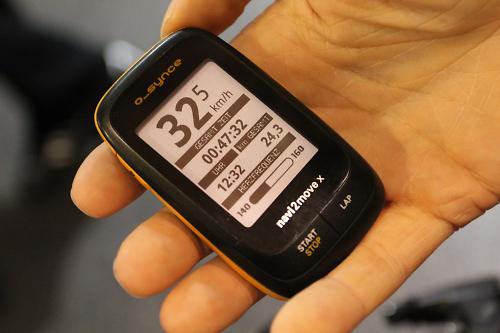 What the did have was a prototype of their new GPS unit, the Navi2Move. In terms of functionality it's in the same ballpark as the Garmin Edge 500; you can follow a track but there's no mapping functionality. ou get all the ususal GPS and bike computer functions, and can also do turn-by-turn navigation with a correctly formatted GPX file. O-Synce's website allows you not only to download and share information, but also includes a fully automated training diary that can suggest a training schedule and adapts to your input, adding or taking away future sessions depending on how hard you've been training. O-Synce also had this very interesting visor on the stand. Okay it's not a cycling product – the visor's aimed at runners – but bear with us. There's a GPS built into the visor for data logging, and that little block above the eye is actually a head up display, so you can see data without looking away from where you're going. A system of lenses effectively projects the display into distant space, so if your eyes are focused on the road you can read the display without refocusing. There's a light collector on top of the visor which makes the display brighter the lighter the environment.

O-Synce are planning to experiment with using a similar system in a bike helmet, to display real time computer stats or GPS turn-by-turn information. Could be interesting... 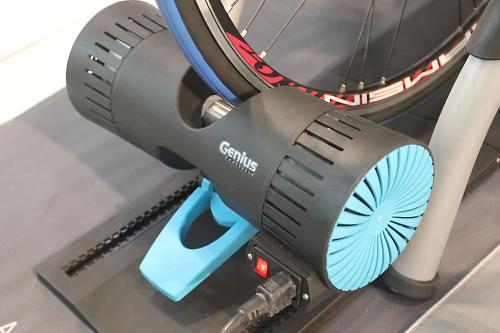 Tacx had the only one of their new Genius trainers on their stand. The Genius will replace the Fortius at the top of the Tacx range and it's an entirely new unit, redesigned from the ground up. So what's new? 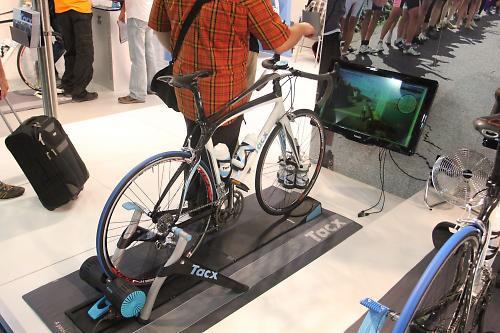 Well, for a start it's completely wireless, using the ANT+ protocol. The only wire you need is a power cable. The resistance unit itself is powered on both sides to reduce vibration, and like the Fortius it's capabale of high resistance and also of powering the rear wheel on descents. Tacx have upped the ante on the power front: the Genius offers up to 1kw of resistance, much more than the Fortius and enough to simulate anything from Holland to Hardknott. The new base is foldable so save storage space, and there's a new front wheel turntable so you can steer in VR mode. 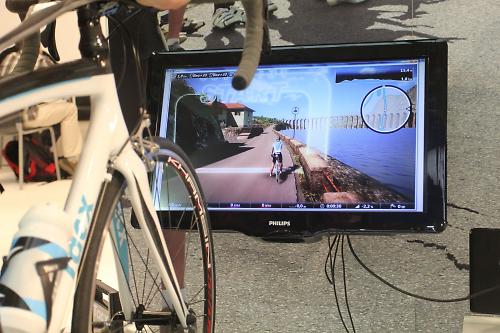 Tacx have updated their software too; the VR is much improved. You'll be able to use all your old DVDs, but there will be a new range of HD products coming out too. Kask have got a new lid, the Mojito, which we like a lot and not only because it's named after Dave's favourite cocktail. Kask helmets have a very good fitting system which allows them to feel both very secure and very comfortable, and the Mojito is no exception. But the Mojito is a much smaller and lighter unit than the Vertigo or C50. Kask have done a lot of work on the inside faces of the moulding to create air channels and drop weight; the upshot is that the Mojito tips the scales at a claimed 220g. UK RRP will be about £125. 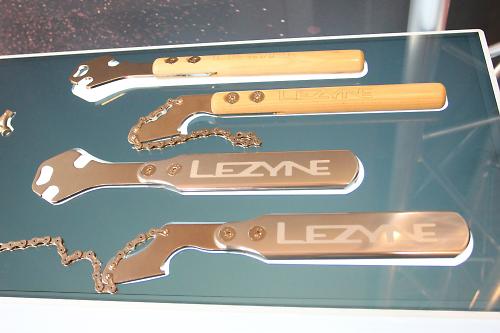 Lezyne have a new range of workshop tools. We can vouch for the bottle-opening capabilities of the pedal wrench thanks to extensive testing at the road.cc party, it looks like it'll make short work of pedals too. The chain whip features a lockring tool and the chain is replaceable, so you can swap it if it wears out (unlikely) or fit the most appropriate chain for your needs (more likely). 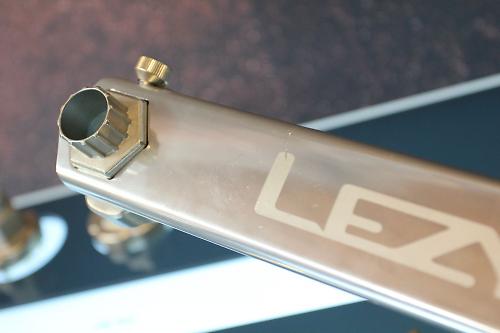 The Big Bar has a 32mm hex opening that will accept a range of tools. Most of them will be double-ended; Lezyne had a combined cassette lockring and external BB one on the stand, as well as a couple of others. All that leverage should make short work of bike fettling. 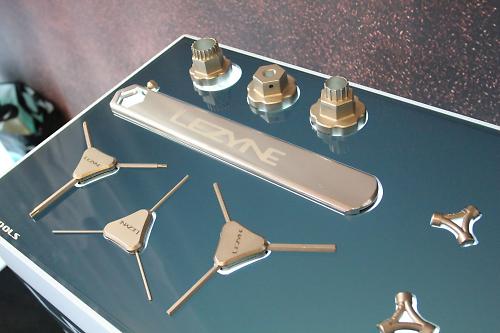 The triangular hex keys are fully rebuildable - the middle section is in two parts and the keys can be replaced. You get an extra set of keys with each one, so efectively you're getting two tools for the price of one. Tidy. 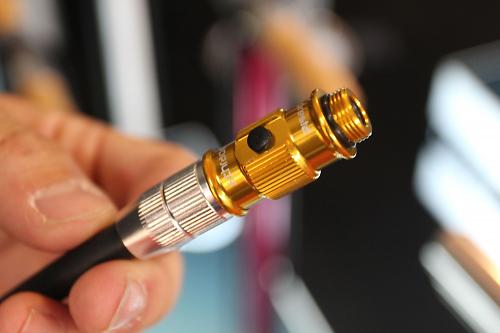 In pump news, the big change is that all Lezyne hoses (on floor pumps and mini pumps) now feature an air bleed system that releases pressure in the hose and pump when you've finished pumping, which means it's easier to get the pump off the valve when you're done and reduces the risk of damaging anything. The hoses and chucks are all backwards compatible, so if you already have a Lezyne pump you can get a new hose or chuck if you like, they'll be available separately. For presta-lovers there's also a new hose that's presta at both ends; a screwy-in one and a slippy-on one.