The bike Mark Renshaw will be riding this year and no.2 in our series of team bikes for 2012
by nick_rearden

The UCI WorldTour of top-ranking professional races which includes the Spring Classics, the Giro d'Italia and the Tour de France all kick off in Australia in only five weeks time, on January 18th with the Tour Down Under. The pro cycling world is gearing up with training camps and team presentations which yesterday included one of the largest, best established and distinctive on account of their Dutch national orange; Team Rabobank with their Giant bikes.

Funnily enough, even though the team kit remains pretty unchanged but for the usual shuffling around of minor sponsors, the bikes have undergone a major change in livery, playing down the usual predominant orange and turning up to eleven the Rabobank and Giant logos on a mostly white frame.

The new TCR Advanced SL frame upon which the Rabobank team bike is based is very similar to the also-new TCR Advanced that we rode recently at the Shimano Ultegra Di2 launch and about which Dave was moved to eulogise a little more than he would normally about such a light, stiff frame. The SL model is made from a higher grade of Toray carbon-fibre and comes with an integral seatpost so it's even lighter although Giant are famously cagey about getting into the whole my-frame-is-better-because-it's-lighter battle of diminishing returns although we can safely say that it's well under the magical 1,000 grams and you don't tend to see them broken from natural causes. The team is famously tight with Shimano, forming pretty much the de facto Shimano factory team so there's a higher than usual loyalty to the whole Shimano range, extending to the wheels and in-house Pro handlebars. The team replica bike with its full-monty set of Shimano Dura-Ace Di2 would set you back £5,999. 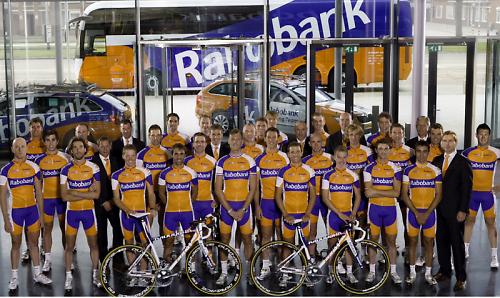