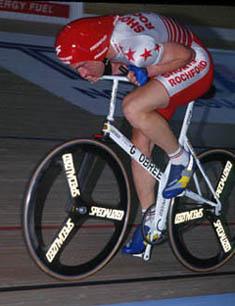 In the wake of the death last weekend of Wales manager Gary Speed, the often taboo topics of depression and suicide within professional sport as well as in society in general have been in the spotlight. One man whose views on the issue perhaps count more than most is record-breaking world champion cyclist Graeme Obree, who twice attempted to take his own life.

Yesterday evening, speaking on the STV programme Scotland Tonight, the 46-year-old said that he had agreed to appear on the show in part to speak for those who had ended their own lives, leaving loved ones behind.

"I think I was incredibly lucky,” explained Obree. “Part of the reason I'm here - it's not an easy thing to come and talk about suicide - is because people like Gary Speed are not here to say 'I wish I hadn't done that'.”

Obree’s second suicide attempt was in late 2001, a year after he had been plunged back into depression following the death of his brother Gordon in a car crash. He had attempted to hang himself in a barn at the farm a few miles from his home where his family kept a horse, and was found by chance by the farmer’s daughter.

"I was the guy who kicked the chair away, with two kids and a wife who I dearly love,” he reflected last night.

Speed, found dead at his home near Chester on Sunday morning in what police are treating as suicide, was also a father of two. While Obree had a known history of depression, the death of the 42-year-old former footballer was reported to have come as a huge shock to friends and family.

The previous day, the former Leeds and Newcastle star had appeared in good spirits on the BBC’s Saturday lunchtime show, Football Focus. Obree acknowledged that those left behind after the suicide of someone close to them can find it impossible to come to terms with what had led that person to take their own life.

"People, survivors of depression and suicide, where people in the family have committed suicide, they struggle to understand the reasons,” he explained.

“There's resentment, there's a lot of anger. There is a lot of feeling that they did it because that person didn't love them enough.

"There are all these resentments and feelings left over and I feel they need to hear it from someone who has actually done that and survived and lived to regret it."

In June, Obree told road.cc during a candid, two-part interview that he himself had finally found inner peace after coming out publicly as gay earlier this year.

He also revealed that most of the correspondence he received nowadays was not from fans wanting to ask him about his famous exploits on the track, but from people struggling with depression who were looking for help.

In yesterday’s programme, Obree was himself asked what it was that had driven him to attempt to take the final, irreversible step of ending his life.

Initially he replied, "It's too short a programme to get into all that,” before outlining the factors behind his decision.

"I felt disconnected and purposeless, you could have given me a million pounds and I would have said 'oh, that's great' but it would have been pointless."

"People cannot understand that,” he continued. “They can't understand this. To give you an analogy, to nail it for ordinary people that might struggle to understand.

“Suppose you went to a party and you really, really didn't want to be at that party and thought 'I really want to go home' because your tired or you really hate the company, but you keep happy and smiley and chatty, clock watching knowing that it will be over soon.

"Imagine you woke up and every day was like that, and it took ten times the energy to deal with every person, being happy and smiley and life went on like that. And you want to do is to go to sleep but there is no sleep so it seems like the only option is to not be there any more.

"Also that state of mind is proper mental illness. It changes your perspective of reality and I actually believed that I was a terrible person and my kids would be so much better off if I wasn't here. It wasn't that I didn't love them. I'm sure with Gary Speed that wasn't the case.

"The main thing I want to say to people is that if someone has left you through suicide it wasn't that they didn't love you, and that's important to say that,” he went on.

"The big message I can give to anybody tonight - obviously accessing help - but my personal message is that I lived to realise how wrong I was, but other people didn't live to regret it.

"If someone is up there, and I'm not saying if I'm religious or not religious, but if Gary Speed's up there he might be saying 'I wish I hadn't done that.’ But he doesn't have a voice.

"I'm voicing that feeling: Don't you be that person that could have regretted it.

"The whole situation is like one of those slot machines where you put the coin in for charity and the coin goes round and round and down and down.

"You've got to break that spiral. Talk to somebody, do something about it. Something has to change."

STV highlighted than suicide is the principal cause of death for men under the age of 35 in the UK.

Men generally are reportedly almost three times more likely than women to commit suicide, with those 35-44 years most at risk – the age group that Speed fell into and, ten years ago when he tried to hang himself, Obree too.

Professional athletes, including those who have retired from competition, are believed to be a group with higher than average exposure to risk of suicide.

The day after Speed’s death was announced, Ronald Reng won the William Hill Sports Book of the Year Award 2011, for A Life Too Short: The Tragedy of Robert Enke, his autobiography of the German goalkeeper who took his own life at the age of 32 two years ago.

People suffering from depression or suicidal thoughts can contact the Samaritans anonymously on 08457 909090.