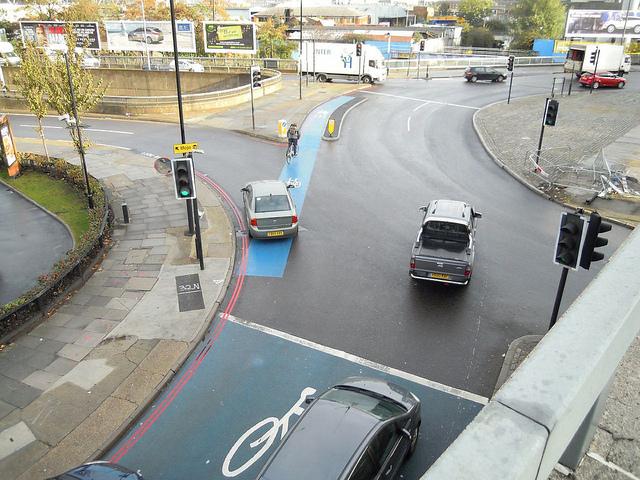 Transport for London ignored recommendations that Bow roundabout needed to be made safer for cyclists by experts it commissioned over a year before two cyclists  were killed there it has been revealed by the London Cycling Campaign (LCC). The LCC is now demanding to know why TfL and the Mayor ignored their own experts' findings?

LCC chief executive Ashok Sinha said, “Documents show that Transport for London was clearly advised by its transport consultants, as well as by the London Cycling Campaign, to provide safe signalised crossings and off-carriageway cycle lanes at Bow roundabout.
“The Mayor has to explain why these measures were not carried out. We’re calling for an immediate redesign of the junction to reduce the road danger and prevent any more tragic deaths.”

According to the LCC Transport for London was given what it describes as "clear advice" by the civil engineering firm, Jacobs Consultancy in the implementation plan for Cycle Superhighway CS2. They recommended the installation of traffic signals specifically for cyclists and pedestrians, and that separate cycle tracks should be installed.

The LCC itself had advised as early as 2009 that something needed to be done about the roundabout to make it safer for cyclists. The organisation also contributed to the Jacobs' report and again warned of the need for alterations to be made in February of this year after seeing the design for the proposed Cycle Superhighway warning that the roundabout was a danger to cyclists.

Last week a 34 year old woman cyclist was killed at the junction when she was in collission with a tipper lorry, three weeks earlier Brian Dorling was killed at the same junction while cycling to work at the Olympic Park, this evening (Friday) a candlelit vigil was held at the roundabout in both their memories attended by members of Mr Dorling's family.

Transport for London is now apparently planning an urgent review of junctions, but as an LCC souce we spoke to commented "we need action on this junction right away and the straightforward options were outlined in this consultants report for TfL in Jan 2010".

TfL has a sorry record of ignoring it's own experts' reports when it comes to improving safety for cyclists and pedestrians on known blackspots having previously shelved recommendations regarding Blackfriars Bridge, the road layout around Kings Cross, and traffic on London's bridges.