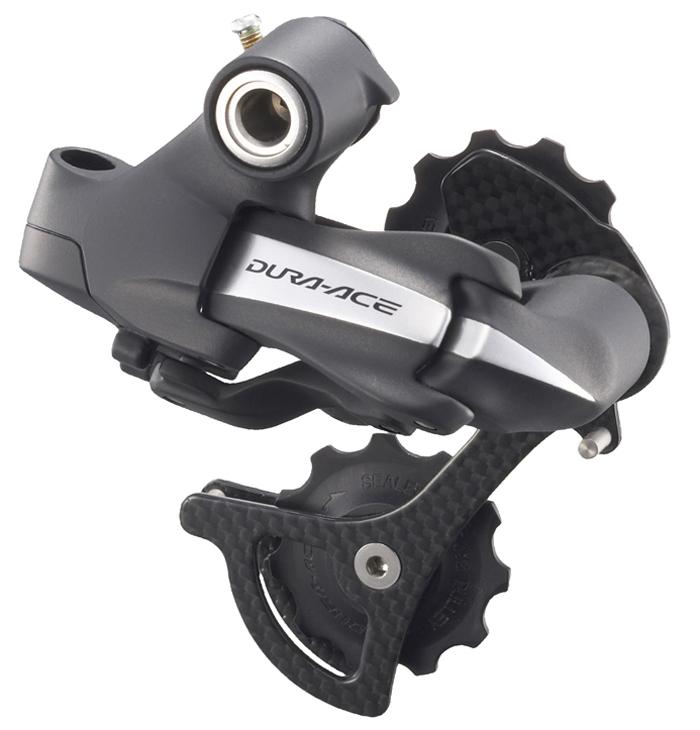 While Campagnolo is upping the ante electronically, Shimano have some plans of their own...
by nick_rearden

Authoritative sources within the bike industry are claiming that the 2013 bicycle model year - that's this time next year for actual shipments - will feature an 11-speed transmission for Shimano's flagship Dura-Ace Di2 groupset along with optional disc brakes actuated from a familiar-looking multi-purpose brake and shift lever.

The 11-speed makes sense for two reasons; first that with the free availability by then of the less expensive Ultegra Di2 components - and possibly an even cheaper 105 version on the horizon - the Japanese manufacturer will be looking to reassert Dura-Ace's differentiation at the top of the component food chain. More on Ultegra Di2 availability in a moment, however.

Second, that much as it will pain them to admit it after Campagnolo has had three seasons by then to sell the advantages of the closer-packed gear ratios, squeezing eleven sprockets into the space of ten really is just an evolution in engineering terms. This is one situation where playing second-fiddle to the Italians has served to prepare the way for the inevitable.

The disc brakes won't be any surprise to anyone who's been watching the development of carbon forks with disc mounts over the last few years with all the talk so far being of racing cyclo-cross. Indeed, all the forks seen so far - 3T's Luteus for example - are specifically designed for 'cross; rough pounding, mud clearance and all. But it does raise the question of how relatively simple it would be to redesign a carbon fork for smooth tarmac after the rigours of 'cross.

Will the discs be hydraulic or cable? Not everyone seems to be agreed on that, as far as we can see the only thing stopping you running cable discs with Di2 now is having the necessary frame/fork mounting points - hydraulics would be a step forward worth shouting about and as we've seen with the latest hydraulic converters for drop bars the technology required to run hydraulic discs with a drop bar is rapidly getting small enough where the idea of sticking it inside a lever hood is looking increasingly doable.

We cannot see the UCI changing the rule for disc brakes on WorldTour team bikes any time soon but this could be a situation where enthusiastic sportivistes could be prepared to go off alone from cycling's UCI-strangled equivalent of F1 if disc brakes offer a clear and unequivocal improvement in performance over rim calipers. And they will. Paul Lew, the carbon engineer from Reynolds Wheels who only designs bicycle rims for amusement when he's not drawing supersonic aircraft, said as much at Eurobike when we asked him why we couldn't have more tubeless road rims along the lines currently on offer for 29er mountain bikes but really light.

The calipers themselves are a no-brainer for anyone who has seen a Shimano XTR mountain bike brake. Presumably the largest 200mm+ discs used on downhill bikes won't be necessary with 160mm being the likely size for road, more than capable of providing the degree of modulation which is the big story with disc brakes and arguably an even bigger one when you're coping with such a small rubber contact patch on the road.

By the way, this won't be for the next launch or even the one after that but the marriage of electronics and disc brakes is inevitably setting off thoughts of ABS to us but that really is just speculation at this point.

One thing for sure because Shimano told us already they were doing it back at the Ultegra Di2 launch is that they will take the opportunity of the 11-speed launch to update the electronic brain and cable set to the fully digital and thinner 2-core protocol used for Ultegra.

Finally, and thinking of Ultegra, we're hearing from disgruntled customers that having been originally promised their new Di2 groupsets in mid-October - ie now - they've been warned by major retailers that their orders won't be filled until December or even January. Could it be that the bike manufacturers have been upping their orders and applying the pressure now that interest in the new set seems to have caught fire?

1
Near Miss of the Day 848: An overtake worthy of the 'must get in front' title
2
Victory claimed for harassment campaign by “mob of decent people” as helmet cam cyclist deletes Youtube and Twitter accounts
3
“People need to see justice being done”: CyclingMikey says camera cyclists suffer online abuse because some motorists “feel they have the right to drive how they want”
4
You've heard of a coffee ride - now Canyon uses real arabica coffee for new Speedmax CF SLX finish
5
Murder suspect in deaths of father and son killed while cycling released on bail
6
Conor McGregor knocked off his bike... and gets a lift home off the driver who hit him
7
Fancy a 3D-printed saddle custom-made for your butt? Plus more tech news from DT Swiss, Giant, 3T, Chris King, Classified, Stages & more
8
Specialized closes inclusive women’s cycle clothing brand Machines for Freedom