The ideal Christmas present, especially if you like the idea of matching your transportation brands in the garage
by nick_rearden

German car company Porsche has announced two human-powered, two-wheeled machines; an urban bicycle based on a Shimano Alfine 11-speed hub with Gates belt drive plus an XTR-bedecked all-carbon-fibre beast which depending on your point of view is either a tarmac-tyred 29er or a slack head-angled urban hybrid.

Either way, despite efforts in the frame moulding around the head tube area to give the pricier grey carbon-framed RS model a distinctive Porsche look, it reminds us overall of the recent well-reviewed Whyte hybrids which immediately makes us feel well-disposed towards it. 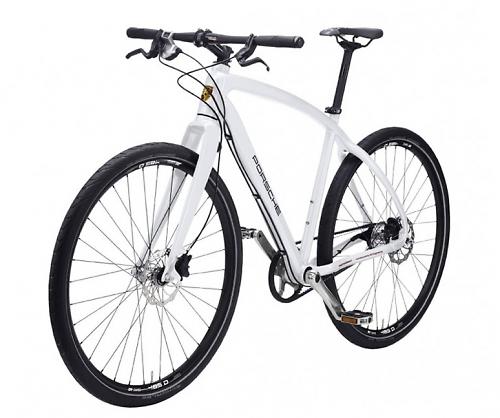 Porsche Bike S will cost £3,000 when it arrives with dealerships in December.

The Porsche Bike RS - standing for Renn Sport (Race Sport) according to the guys over on gizmag - is due to cost £5,000 when stocks first arrive at Porsche dealerships in December. A tasty spec based on Crank Bros wheels, Magura hydraulic brakes and the aforementioned Shimano XTR components based on a carbon frame and fork means it's a tad over the odds price-wise but hey, it might ride like a dream and it does say Porsche on the headbadge.

The white Bike S model is based on an aluminium frame with the same carbon-fibre fork as the RS but this time with a Gates belt driving a Shimano Alfine 11-speed hub. Price is £3,000. Sizes: small, medium and large and like the RS sibling looks like it's doing 30mph standing still. Always a good sign. Porsche Bike RS: £5,000 but it does have Magura hydraulic brakes all round.