It's not just the headline Stevens models ridden by the Stevens UK cyclo-cross racing team that will be making it to the UK from Germany; there will be affordable ones, too.

First, that the Germans are coming. With Canyon, Focus, Cube, Storck and now Stevens making inroads into British cyclists' consciousness it's hard to deny that the country famous for the engineering of its cars can just as handily turn to high-performance bicycles, too, if you hadn't already noticed.

Then there is the way retailers are looking for unique and exclusive brands to distinguish themselves from their rivals. The best example of this is Halfords with its Boardman bikes and there is Evans selling BMC, Jamis and Fuji through its 40-shops but there is no reason why a smaller business like Hargroves in just five locations but really focussing on a specialist subject like cyclo-cross cannot play the game, too, with the Stevens brand. 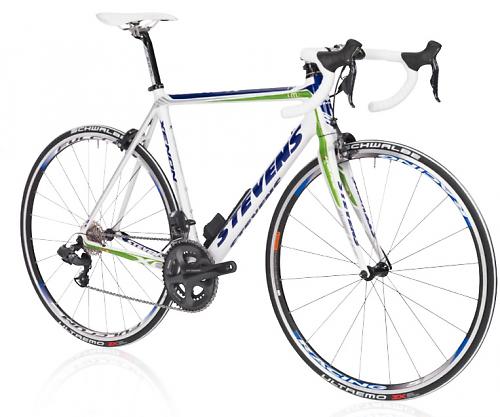 The electronic bike will sell for £2,799; not the cheapest we've seen but it's a complete Ultegra Di2 groupset.

Finally, though, it's the way cyclo-cross as a theme for practical, everyday bikes has captured the imagination of designers, bike shops and ultimately customers over the last years and we've written about recent launches from Whyte and Genesis to illustrate the trend. We have the granddaddy of them all, the Specialized Crux, in for review at the moment.

Jo Burt enthused about Stevens' new top-end prototype in the first of his Eurobike cyclo-cross round-ups but that carbon beauty won't be seeing these shores until this time next year and we won't be liking the price when it does. Meanwhile, though, Stevens make a range of three aluminium-framed 'cross bikes starting with the Cyclo Cross 105 at £999 and finishing with our Shimano Ultegra-equipped Vapor which look a little less murderous on the bank balance as well as ticking all the boxes for disc Shimano brakes and carbon fork at an all-up weight under 10Kg. Stevens Stratos: 790 gram road frame was a looker at Eurobike. Another along with Wilier, BH and Litespeed using the new BB386 bottom bracket format. The new knee warmers include a dash of Lycra in the Merino blend.

As we pushed the 'post' button on Friday, Rapha was teasing us with a hint of this week's Autumn/Winter clothing range and a view of the new Merino knee and arm warmers already on its site. The new Merino blend contains a small percentage of Lycra to add 'stretch and durability' to the soft and warm characteristics of the natural wool. Price is £40 for the arm warmers and £45 for the £45 for the knee warmers. There are cosy new socks, too.

German tyre manufacturer Continental was busy congratulating itself yesterday on Tony Martin's win in the World Championship Time Trial on Wednesday. As his team's supplier of tyres that would be hardly worth mentioning here but for the news that the HTC-Highroad rider was shod with high-pressure, clincher tyres of the style ridden by most of us and not the exotic glued-on tubulars that professionals with teams of mechanics use.

At Eurobike and prior to Martin's win, we asked Continental when we might expect more high-performance clinchers for the likes of us and they replied that when the top amateurs who are presently satisfied spending their evenings gluing on 'tubs' asked for them, then they would be ready. It looks like some of those riders might now have a reason to ask for those lighter clinchers. The new Grand Prix TT tyre as used by Tony Martin will be available in the UK in the Spring, just in time for time trial and triathlon season. Another KCNC tapered headset option and in colour, too

Tapered steerers offering a stiffer, lighter, bigger bottom and a diameter at the top that handlebar stems will fit are all the rage with bike designers and why not says us if the result is less weight and more accuracy in steering. The only problem is there is no standard with frame and fork manufacturers offering all sorts of combinations with the headset makers expected to keep up as the bearings come up for service. KCNC seem to be doing a better job than most with keeping up; the new R1 set being available now in 1.125 to 1.25" for £94.99. Plus, you get a fancy CNC-machined top cap in lovely colours. The colour choices from KCNC if your tapered-steerer bike needs a new headset.

Still with the Germans, Uvex upping its game in Britain

Uvex has a new pair of cycling glasses, the snappily-named SGL202, which won a design award at this year's Eurobike show. They're super-light with no frame above or below the lens, so they might be worth looking at if you're into TTing and are always looking through the top of your specs. On top of that they score Uvex's Variomatic photochromic lenses, which have been improved this year to better cope with extremes of temperature which can slow down the reaction to light.

The SGL202s also feature a very flexible frame; the arms can be bent right back on themselves so they'll probably survive the normal glasses-killing scenarios of being sat on or run over. The bridge is fully adjustable and you can have them in six colours; the asking price is £119.99. 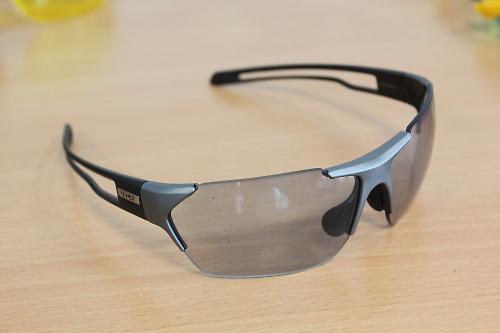 There's also two new lids from Uvex. First up is a new basic, all-purpose helmet, the i-Vo. At £39.99 it's an impressive bit of kit for the money, with Uvex's click-adjustment fit and some pretty big vents to improve ventilation and keep the weight down. There's a peak for MTB and commuting duties, but the neutral styling should appeal to all types of rider.

Second up is the Ultrasonic, a new road helmet. At £89.99 it's a touch cheaper than Uvex's pro-level FP1, but it's a slightly more back-heavy design with a lower rear, though it's still pretty light too at about 240g. The internal structure of the helmet is designed to dissipate shock throughout the helmet in the case of a collision; we didn't quite get our heads round exactly how it differs from a standard helmet in that regard but it sounds like a bonus. Once again you get dial adjustment and the Ultrasonic has a height-adjustable cradle too. There's mesh in the frontal vents to stop the local bee population taking up residence in your hair. We gushed a bit about Fast, the latest version of the Ridley Noah shown at Eurobike that has the cantilever arms of the concealed brakes as an integral part of the carbon fibre material the forks and chainstays are formed from; ingenious. Ridley has launched an interesting competition for anyone to design an ad campaign for the new bike with the best winning a €10,000 example of the range-topping machine. Entrants have until October 15th to submit their entries at which point the best will be posted for voting by the public. In best X-Factor style the final prize will be selected 50% by public vote, 50% by Ridley's own staff and designers. 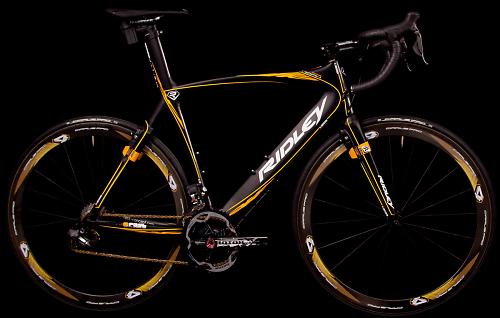 Ridley Noah Fast: clever creatives can win one of these babies starting now.