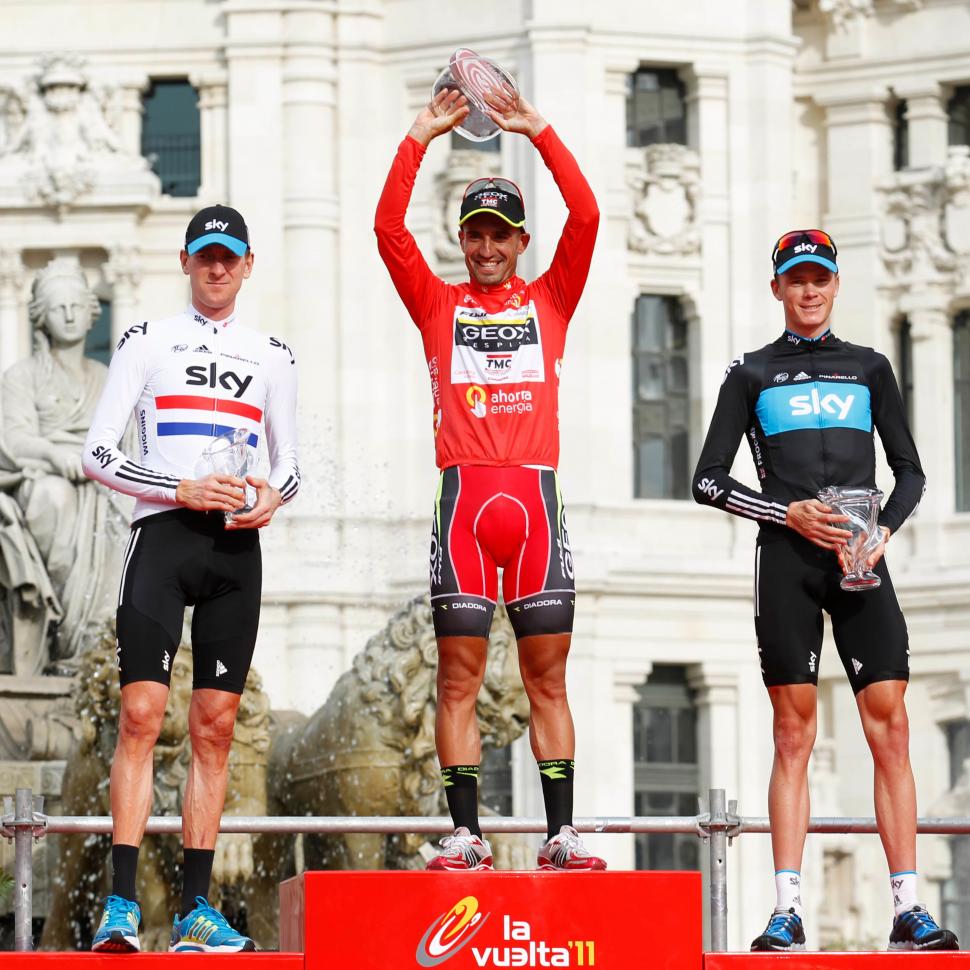 Team Sky, whose debut Vuelta 12 months ago was cut short following the tragic death of carer Txema Gonzalez, is tonight celebrating Chris Froome and Bradley Wiggins both getting onto the podium behind this year's overall winner, Juan Jose Cobo of Geox-TMC. By finishing second, Froome joins Robert Millar as the highest-placed Briton ever on one of cycling's Grand Tours; Wiggins' third place puts two British riders on the podium for the first time ever, and what's more, both are riding for a British team.

"It’s a sign of just how far we are moving forward and just how well Team Sky are performing this year to achieve an historical result like that. Obviously we’d have liked to be on the top step but credit to the guys, they’ve both done fantastic races.

"It was a breakthrough performance from Chris Froome," Brailsford added. "We’ve always known from training that Chris produces fantastic power and great numbers. He’s done that back-to-back in a consistent way over the three weeks here."

Wiggins, of course, only elected to ride in the Vuelta, a race he'd never participated in before, after crashing out of the Tour de France at the end of the first week of that race in July, as Brailsford was quick to point out.

"Bradley was being operated on for a broken collarbone only eight weeks ago so it's a remarkable turnaround. For him to perform at this level against some of the best riders in the world is an achievement in itself.

"We set out wanting to be the first team that puts a British rider on the top step of a Grand Tour and we’ve come a long, long way and as close as we could possibly get to that which gives us great confidence looking ahead to the three Grand Tours next year," he added.

Froome, whose current contract expires at the end of this season, has attracted attention from other teams, although he has hinted that he may stay with Team Sky. Talking of his performance over the past three weeks, he said: "I'm over the moon and it was an experience of a lifetime. Over the last week when it became clear that my early form and time trial performance were not one-off results I really began to enjoy myself and came to the realisation that I can now compete with some of the best GC riders in the world.

"It’s been really enjoyable and the best thing has been having my family over here to see me in the red jersey and also win a stage. The highlight for me was definitely winning that 17th stage at the top of the Pena Cabarga climb; it was a special day and will live long in my memory. 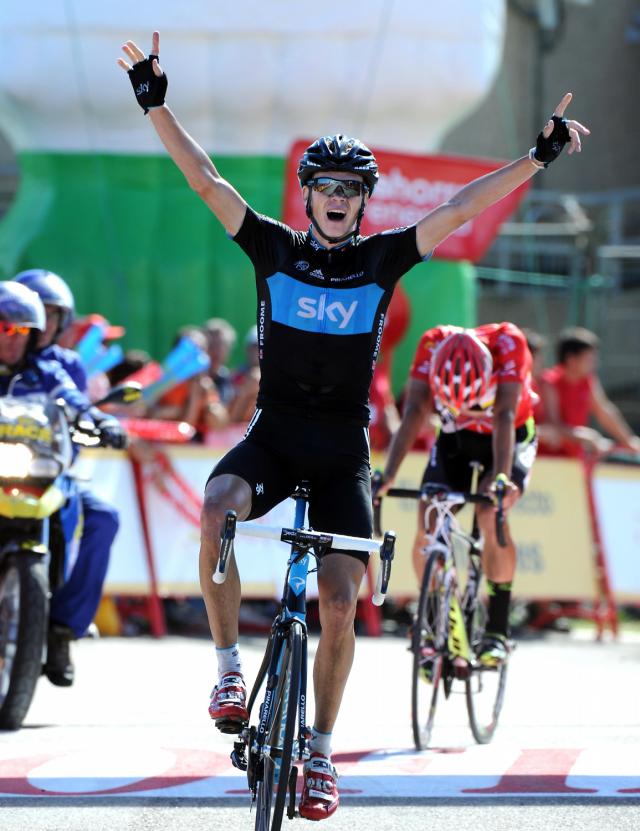 "Hopefully I’ve done something good for the team but I wouldn’t have been in this position if it wasn’t for everyone else. The other riders have worked so hard over the last three weeks to keep myself and Bradley protected.

"The support staff and the people behind the scenes were also amazing and they don’t get enough credit for what they do," he added. "It’s them that have got us here and I’m so happy that I and Bradley finished on the podium."

Wiggins, who wore the red jersey for four days during the middle week of the race but eventually finished 1 minute 39 seconds down on Cobo, said: "Thinking back to where I was a couple of months ago it’s a fantastic feeling to finish on the podium here and obviously it’s a massive result for the team to have Froomey on the podium with me too.

"With my shoulder as it was this race was always going to be a bit of a testing ground for me and I’m really happy with the way I’ve been able to ride.

"This race has proved that what happened two years ago at the Tour de France" - when Wiggins finished fourth - "was no fluke and I know in my mind now that I have what it takes to match strong riders at the Tour next year.

"Froomey deserves massive praise for the way he’s ridden this race. He buried himself for me during those first two weeks and has been able to maintain his form right the way through to today. He’s produced ride after ride and also got his deserved stage win – I’m delighted for him," Wiggins concluded. 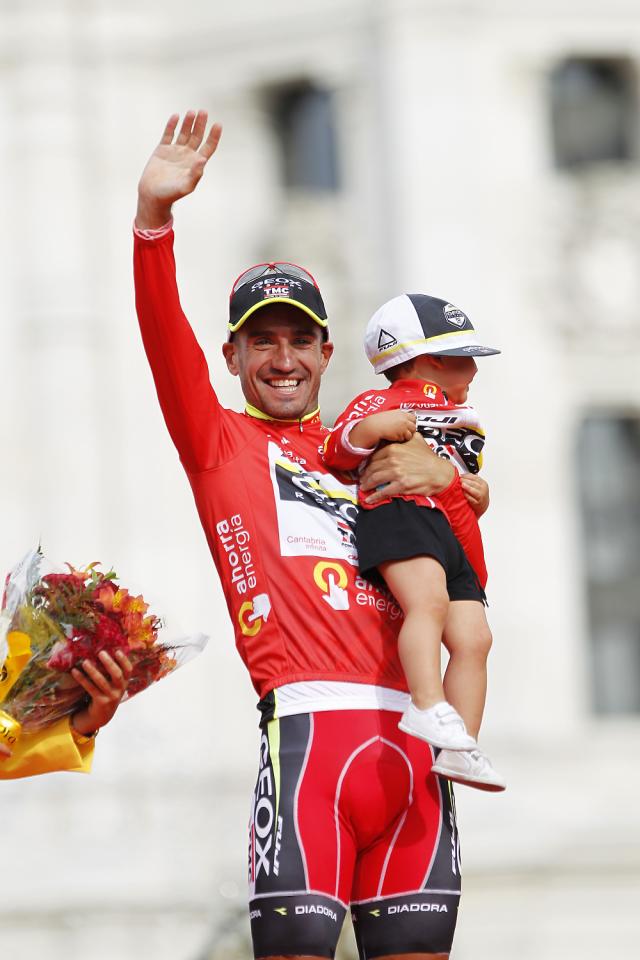 With a breakaway in Madrid today meaning that Froome was unable to challenge for bonus seconds that might have closed the gap on Cobo, and the race coming back together for a bunch sprint in which the British rider was never going to figure, it was a relatively relaxed day for the new Vuelta champion, although he himself was surprised at his achievement.

"I knew that I was in a good shape since the Tour of Burgos at the beginning of August and I’ve had two weeks after that to improve my condition," revealed Cobo. "But I came to the Vuelta to help Carlos Sastre and Denis Menchov and three weeks later, I’m here to talk about winning the Tour of Spain, it’s unbelievable!"

Cobo almost gave up cycling for good earlier this year, and disclosed: "I’ve suffered from depression for 18 months. The best therapy for me was to come to the Vuelta with no pressure and try and do my best. I took the red jersey at the top of the Angliru and I enjoyed being in the lead even though I was stressed, of course."

The 30 year-old's win in his home tour will naurally open up new opportunities for Cobo, who added: "I hope it’s a first step towards more consistency in the future. I’ve won races before but I understood that I can win a Grand Tour with a good shape. The Vuelta motivates me for fighting at the greatest races abroad as well." 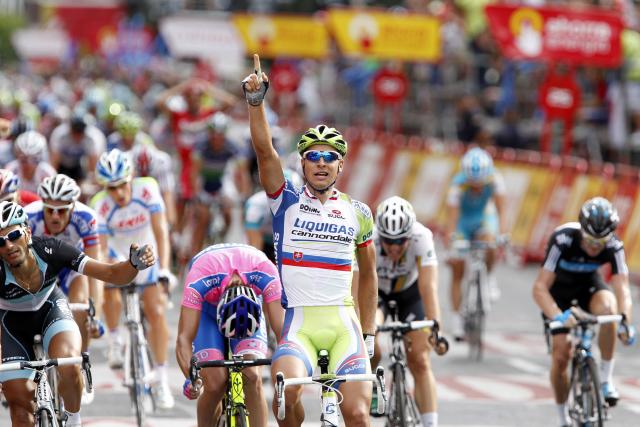 Today also saw Liquigas-Cannondale's Peter Sagan sign off from his debut Grand Tour on a high by taking his third stage victory at the age of just 21, The Slovak rider came through late to overhaul Leopard Trek's Daniele Bennati on the line, with Lampre-ISD's Alessandro Petacchi fading at the end and finishing third.

"It’s been a great day," said Sagan after completing his hat trick of stage wins. "I was riding at the front and I took the wheel of Bennati but I got boxed in a bit, so I had to stop my effort. I’ve had to re-start from behind. It was hard. But I was still fresh because my team protected me from the wind during the whole stage. I didn’t feel any breath. I was only focused on winning today. It was a technical course, exactly what I like and I was feeling very well.

"I’m very happy with this Vuelta," he continued. "I’m just frustrated with what happened at the end of stage 16 at Haro when Juan José Haedo won and I was forced to break in front of the roundabout. Otherwise, I might have won the green jersey. I’m satisfied anyway. This experience of three weeks will help me for the future."

Quizzed about how he sees his career developing, Sagan said: "I know what I’m good at and I want to remain who I am. I can hang on in some climbs and I’m fast. I’m lucky that I am a sprinter. I want to develop as a sprinter. I prefer not to think of the coming world championship. It’s difficult to plan. Luck is needed. Team work is an important factor and we’ll have a team of three Slovakians. I believe the Velits brothers will be on my side. I’m not bothered about the future. I’m happy with how I go. At the beginning of this season, I didn’t think that I could win all these races."

Sagan now has his sights set on next year's Tour de France. "It’s a famous race, so I want to give it a try. I’ve seen it on TV. It’s different from the Vuelta. It’s more nervous but I want to do the Tour de France next year, as it could be the best preparation for the Olympic Games" - the latter being a race in which you wouldn't bet against the young Slovak getting in among the medals. 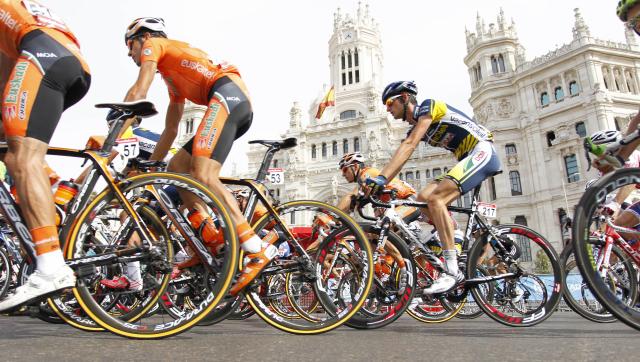 The 66th Vuelta heads towards its conclusion in Madrid (copyright: Tour of Spain/Graham Watson)