We've already covered Colnago and Pinarello's 2012 launches but not to be outdone De Rosa the third of Italy's big glamour brands showed off not one, but three new bikes for 2012 and gave road.cc a first look at their prototype 2013 TT frame.

This big news from De Rosa is that their range-topping King RS is a completely new bike for 2012, I've got to admit that I didn't realise that until I asked what De Rosa were doing about Di2 compatibility… yes, there is a Di2 compatible version of the new frame, no it won't be available in the UK. I should have looked closer than the name and the paint job there's no clue to the newness of their range topper in it's name – which is the same as last year's model… there's a reason for that, but we'll save that for later.

First off let's quickly talk aesthetics. The other main reason I initially didn't cotton on to this being a new bike, general doziness aside, is that the colour schemes for the latest King RS are pretty  similar to those offered last year…not quite the same though and like the rest of the Italians De Rosa have rowed back a bit on the metal flake and candy colours. So you get a choice of a very restrained grey, a red and white one, a blue model because that's Hugo De Rosa's signature colour, and for those that simply must be on trend a zingy gold and red number…erm, which I rather liked. As ever the paintwork and the level of finish are superb but it's underneath the paint that the real meat and potatoes lurks, a bike that is significantly different from its predecessor in terms of tube profiles, frame materials and methods of construction. The new King RS is made from a mixture of 30T T800 carbon, which is itself pretty high end stuff, combined with 30T ultra high modulus T1000 carbon and 60T ultra high modulus carbon - we're guessing that's used around the points needing the greatest stiffness such as the bottom bracket. Impressive, but as Cristiano De Rosa explained to me the real innovation is in the "elastic" resin used with that carbon which allows for a very stiff frame that's also comfortable too because the resin helps absorb bumps and road shocks. It sounds similar to the Special Elastic Integrated Film (SEI) process used by Wilier on their new Zero 7 which involves sheets of special elastic material being placed between the layers of carbon and when heat and pressure are applied the two materials become one… hmm sort of the way resin impregnates carbon anyway the resulting material shares the properties of both. Dashed clever and pretty much what is also going on with the King RS too. At the material level then the new generation De Rosa RS is different and structurally it's different too. De Rosa have spent 57 years dialling in the ride and handling properties of their bikes so they haven't messed with the geometry – in fact there are subtle changes to the angles on most sizes of most of their bikes to ensure that as far as possible all sizes of their machines ride and handle the same ways… but I digress. Geometry is the same and so is the integrated seatpost with added adjustability, De Rosa only introduced that on the last King RS model in 2009 so they're sticking with it.

The rest of the bike is different the headtube flares from 1 1/8 to 1 1/2, while the down and top tube are much more sculped in appearance than those of their predecessor. Internal cable routing is now via the head tube rather than the top and down tubes. That down tube widens and flattens noticeably as it approaches the bottom bracket - which is now of the BB30 variety. The chainstays are beefier too and squarer in profile so power transfer from pedals to rear wheel should be pretty snappy, and the rear triangle looks to be a one piece affair, well the chain and seat stays anyway. The seatstays are much more organic looking in shape then the straight ones on the previous King RS these start of thin and widen out as they get to the dropout they also curve slightly too. As you'd expect the front fork is new as well it's a wider, thicker profiled less angular affair, it's still a straight blade though.

The all up weight of the new bike is claimed to be 10 per cent lighter than the old King although the new RS doesn't look like an exercise in lightness and while the the phrase aero road bike was never uttered that looks to be where it is coming from… or possibly going. Wherever it's going it'll get there fast is our guess. On paper at least it looks to be a bike built to deliver the maximum amount of your effort to the back wheel in the minimum amount of time, with ultra-responsive steering and a fork that isn't going to be knocked off line easily. Can't wait to get one in on test.

And the reason for keeping the name the same? Well according to Cristiano De Rosa this would have been the fourth generation of the King but calling it the King 4 was out because four is an unlucky number in Asia and the Asian market is a very important one for De Rosa. Only thing is… this is surely the 5th generation of the King, starting with the King, King X-Lite, King 3, King RS and er, King RS again. So does that make it lucky or unlucky or am I maybe not getting something here? So from the sublime to the equally sublime but this time in steel. The new King RS wasn't the only new model De Rosa had on show at Eurobike last week there was also the very different but very beautiful Nuovo Classico, if you like your lugs shiny and your steel blue then this is the bike for you. I say 'new' but Cristiano told me that he started off building these frames in his father's workshop when he was 12, I wouldn't like to put an age on a man but I think we can be pretty certain that he's knocked out, (probably not quite the right technical term), quite a few since then. 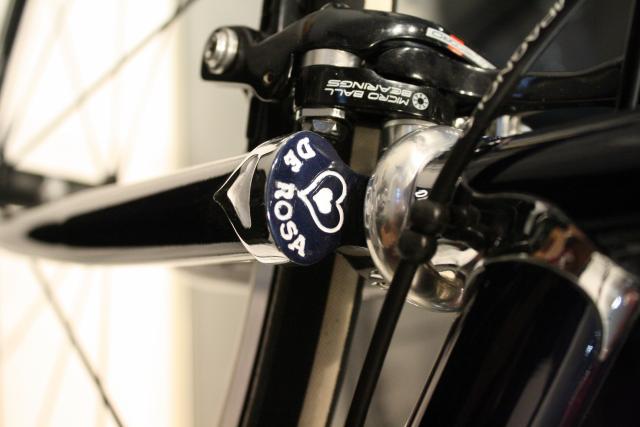 The Nuovo frame is built from Columbus Deda Zero Chromo tubes held together with Microfusion lugs so it's 100 per cent Italian and it is as the name suggests a classic design: thin tubes, horizontal top tube, quill stem… you know the drill. 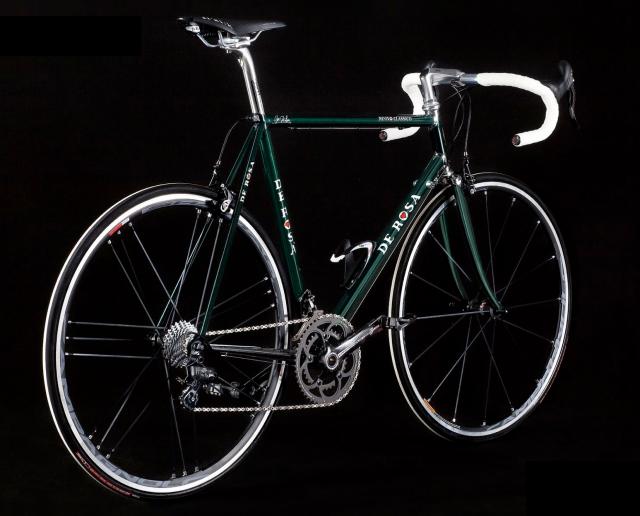 The Nuovo comes in two colours, Hugo De Rosa's signature deep blue or a deep green and for the moment at least it will be available as a frameset only. Again, it should be ready to hit the shops in the UK about now and if you absolutely, simply must have one it'll cost you £1799.99. The Nuovo Classico is so new that it didn't have it's own spot out front on the De Rosa stand nestling instead in the window of Cristiano De Rosa's office window - yes the De Rosa stand is big enough to have an office with a window on it. Also in the office but not in the window was this prototype time trial frame scheduled to be launched in 2013 so this really is an early sneak peek (Cristiano De Rosa also told us that the company was working on three new bikes at the moment and we'll see at least two of them next spring. The Time King TT bike is a work in progress but a very interesting one. De Rosa have tucked the back wheel in tightly agains that deep section bottom bracket there's also a very deep junction at the head tube - not sure what the blazers dishing out the UCI sticks will have to say about that… possibly nothing. Brakes look to be inboard, it would be a surprise it they weren't. The fork crown flows back in to the down tube giving a shouldered effect to both - possibly to help shelter the brake – something that is mirrored in an even more pronounced way by the seat stays which shoulder out at right angles from the aero profile seat tube.

De Rosa are obviously working on an integrated stem, the current set up being there simply to hold the fork on and we're guessing they will be doing something to tidy things up around the junction of the top tube and seatpost. Speaking of the seat post the extra bottle mounts on the back are a nice touch. Oh and it's got some good fast-sounding acronyms on the frame, H.AD Harmonic Active Damping anyone? And it's got an HM Fiber CoreShell, I think it's fairly safe to say those will have multiplied by 2013. This one we thought was a prototype is actually a production model, although UK distributors iRide haven't decided whether they will be bringing it in to the UK yet… oh go on! It's a flat bar belt drive version of the Milanino drop bar aluminium frame that's been a big hit in the UK on the cycle to work scheme. Given that the standard Milanino is used a commuter machine it does seem a logical step to bring out a commuter version… not sure I'm sold on the belt though. While it makes for a cleaner ride it also adds a big lump of cost I'd rather save the money and tuck my trousers in my sock and have a chain – chains are cool too, but then I'm not Italian.

1
Fears new cycleway will lead to drunkenness, drug taking and 'naked selfies in the woods' (no, really)
2
Nail traps laid down against Cheshire cyclists
3
eBay seller refuses to accept bike auction offer – says "would be unhappy if I sold to Scouser"
4
Police investigating cyclist Tony Parsons' disappearance confirm his body has been found
5
Near Miss of the Day 521: Close pass ... by a police van (plus how it all went a bit Kafkaesque afterwards)
6
Council has "no intention to enforce" parking restrictions in segregated cycle lane where cars are parked bumper to bumper
7
Three Bora-Hansgrohe riders in hospital after driver crashes into training ride
8
The real story about Boris Johnson’s bike ride? It highlights confusion over lockdown rules