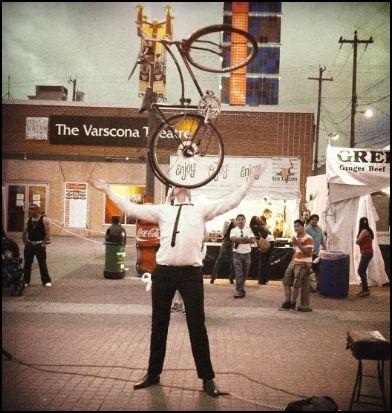 Something is rotten in the province of Alberta.

Or rather someone. Earlier this month we brought you news of an Alaska to Argentina Panamerican Highway cyclist who had his bike stolen in the city of Edmonton, Alberta's provincial capital. Oddly a lesser value bike appeared to have been left in its place as if the thief had simply “traded” up.

Now news reaches us of an even more brazen theft in Edmonton, whereby an Australian performing artist’s borrowed bike was stolen during his street performance at a festival there. The Edmonton Journal reports how Trent Baumann, aka the Birdmann, had entertained a crowd by balancing the bike on his chin and had moved on to the next part of his act when he noticed the crowd acting strangely.

“I was in the centre stage and I had a few hundred people watching me. And at the end everyone was laughing and clapping and cheering and caught up in the euphoria of the spectacle,” he told the Journal. “Suddenly I see the audience sort of stopping, and I didn’t know what happened. The next thing I know a large section of the audience races across the stage and starts chasing someone who, by then, was out of view.”

“I couldn’t chase after him because my choreographed dance finale involves me ending up in black stilettos and fishnets.Not good for a high-speed chase,” said Trent.

The miscreant managed to evade his pursuers and get away. Trent meanwhile finished his act, only to be told that the the vintage Dutch style bike, which had belonged to his host Lindsay Stamhuis’ grandmother, was lost.

As we have already heard in the previous Edmonton bike theft item, despite the odd tea leaf in their midst, Canadians are in the main a generous bunch, and after his performance, donations of money and even replacement bikes were freely proffered.

“All in all people were very supportive and that’s the unique, Canadian way,” said Trent.

However, he desperately wanted to try and track down the missing bike which had sentimental value for Lindsay, but scouring the local neighbourhoods by car that night proved fruitless.

The following day, Lindsay went to report the theft at the festival’s security tent.

She said : “I was giving a description of the bike and the constable behind the desk said, ‘Hold on a second.’ Then she grabbed a photo and asked, ‘Is this the bike?’ And I said, ‘Yes.’”

The thief had apparently stolen another bike a few miles away from his initial misdeed and left Lindsay’s machine outside the house of the new victims. They had, thoughtfully, locked up that bike and reported it to the authorities, allowing Lindsay and the machine to be reunited.

No news yet on whether latest victim’s bike has been recovered but we can only assume that the series of thefts might stop once the most desirable bike in Edmonton has been pilfered, with some lesser steed left in its place.

We'll keep you posted, this one might have legs.