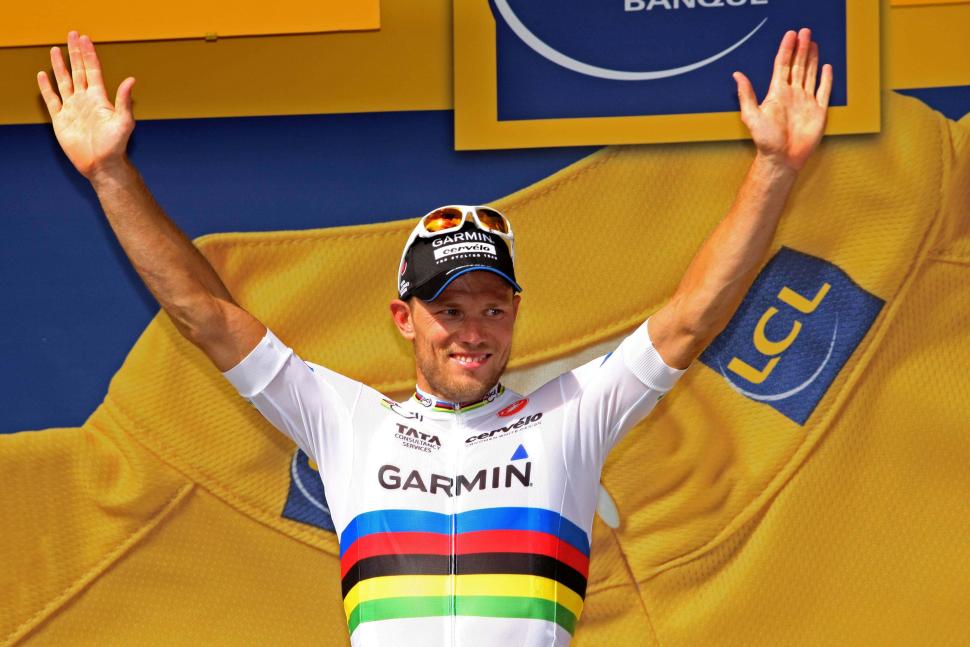 Race will be Norwegian's last as world champion before title defence in Copenhagen...
by Simon_MacMichael

The rainbow jersey will be worn on Britain's road's next month, with Garmin-Cervelo naming Thor Hushovd in its squad for the Tour of Britain, which takes place from 11 to 18 September, finishing just one week before the Norwegian is due to defend his world championship title in Copenhagen.

Since Italy's Gianni Bugno retained his title in 1992, only Paolo Bettini has managed to pull off back-to-back world championship wins, so the odds are that the race will be the last time Hushovd, who will join BMC Racing for 2012 and has been controversially left out of Garmin-Cervelo's Vuelta squad, will don the coveted jersey.

Alongside Husovd, who last month won two stages of the Tour de France and spent a week in the race leader's maillot jaune, three British riders have been named in Garmin-Cervelo's provisional line-up.

They are David Millar, Roger Hammond and Daniel Lloyd, with the team completed by  the Dutchman Martijn Maaskant and New Zealander Julian Dean, who in 2004 won the Tour of Britain Prostate Cancer Charity Points Jersey.

Reserves have been named as Cameron Meyer, heading to GreenEdge at the end of the season, and Brett Lancaster, both of Australia, and Gabriel Rasch of Norway.

“We are very pleased to have such a strong Garmin Cervélo line-up racing at this year’s Tour of Britain, and very much look forward to welcoming the current World Champion Thor Hushovd to The Tour,” commented Race Director Mick Bennett.

“British fans will also be looking forward to seeing Roger Hammond, Dan Lloyd and David Millar in action. We saw during the Eneco Tour that David is currently in great form, so I’m sure he will be highly motivated to do well in The TfL London Stage Individual Time Trial,” he added.

The race gets under way in the Scottish borders on Sunday 11 September and ends in London the following Sunday with an individual time trial followed by a circuit race.