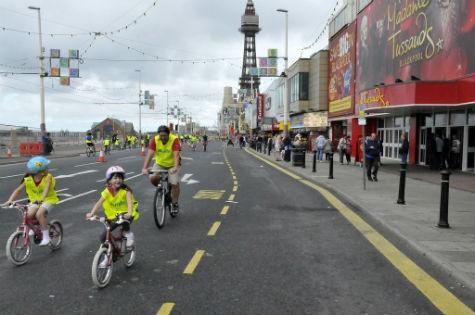 Another impressive Sky Ride weekend saw over 20,000 people take to their bikes at events in Blackpool and Southampton.

Plenty more people came out simply to watch and experience the day as cyclists took to traffic-free streets for the chance to enjoy the maritime city on two wheels. This was the ninth event of Sky Ride 2011 - a national campaign to get one million people cycling regularly by 2013.

The event, hosted by Sky and British Cycling, in partnership with Southampton City Council, allowed riders to take in the 7.3km route at their own pace whilst enjoying some of the city’s most well-known landmarks including the renowned Bargate Monument and the Southampton Docks. Participants were treated to a whole host of activities and entertainment, along the route and in the green open spaces of Palmerston Park.

As well as taking part in Sky Ride Southampton, local residents are also being asked to take part in a nationwide poll and nominate their favourite hill to cycle down in the region. Backed by multiple world and Olympic champion Sir Chris Hoy, the nationwide search will see the ultimate cycling descent being crowned the UK’s Perfect Hill. Entrants are asked to take in to consideration location, view, where the hill takes them, historical resonance and most importantly what the hill means to them.

Sky Ride ambassador Kirsty Gallacher said: “Thank you to everyone who came out and took part in Sky Southampton today. It was a brilliant family day out and it was great to see so many bikes taking over the city’s streets. I hope it’s reignited your love of going out for a bike ride and that this is only the start of your cycling journey”

Corin Dimopoulos Sky’s Director of Cycling said: “I’m delighted Sky Ride has returned to Southampton for the second year running and that so many people of all ages and abilities have been able to enjoy cycling through the city. Through our great partnership with Southampton City Council and British Cycling, we hope to build towards our aim of getting one million more Britons cycling regularly by the end of 2013.”

Meanwhile at Sky Ride Blackpool 7,500 people took to two wheels for the chance to ride an 8km traffic-free route at their own pace whilst enjoying some of the town's best-known landmarks.

The route took in Stanley Park and the famous Promenade. There was loads of entertainment on offer, and participants also had a chance to meet GB paralympic cyclist Tel Byrne.